No Comments on Should Eggnog Be Aged?

Part one of our eggnog adventures appeared previously – What booze works best in eggnog?

Always asking the important questions, we are. The most obvious answer to the question, ‘should I leave this container full of dairy to ferment?’ is, of course, ‘no.’ Rarely has there been a plan of action with a more likely-to-be-unpleasant outcome. Eggs? Milk? Cream? Left to, essentially, go off, prior to further consumption? Yeah, we’re alright, thanks.

There is a counter argument, though. One which suggests that, with enough sugar and alcohol, the negative effects of ageing already-bacteria-ridden substances can be staved off and that, rather than becoming a terrible poison, the eggnog might simply mature and refine, its flavours becoming deeper, more nuanced and, most importantly, not-at-all-vomit-inducing. 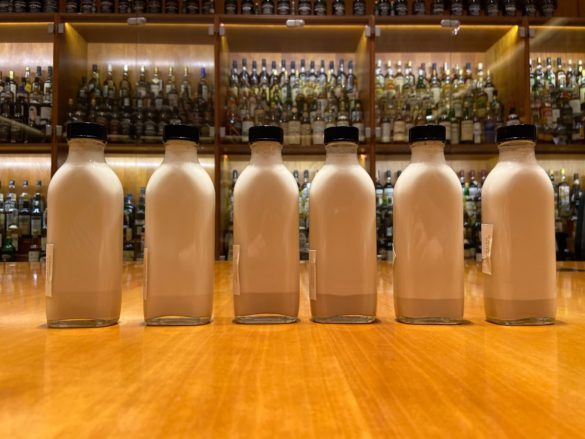 Six nogs of separation. Nutmeg clumps were an unforeseen side-effect.

Luckily for you, we are happy-go-lucky fools who enjoy messing about with booze in the interest of not only furthering the world’s concrete knowledge of alcoholic beverages, but widespread public health and safety. You’re welcome.

The first thing to note here is that immediately post-publication of Project Nog Part 1, Whisky Exchange ambassador Billy and editor Caroline were left alone for five minutes and promptly lost their minds. Flecks of fresh nog spattered across their wild-eyed aspects, they not only bottled up two of our core nogs for fridging, but mixed some of them up. Which is to say, with each other. The result is a five-strong spread of nogs, thusly:

Read on to find out whether or not their hair-brained schemes bore fruit of any consumable quality.

The next thing to note about ageing eggnog is that, as you may have gleaned from the above, it should be done in the fridge*. The addition of large amounts of sugar and alcohol may be enough to slow down any ill effects on the notoriously-volatile dairy components, but to leave it all out in the warm would be to tempt fate.

Our process, then, was simply to bottle up our desired test nogs and whack them in the fridge for a week. Here’s what happened. 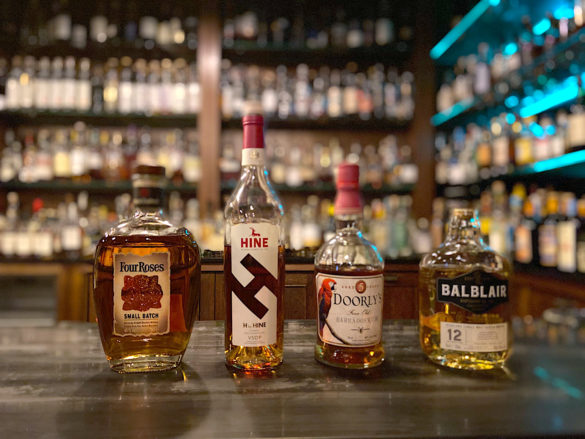 Our spirits of choice

Rum eggnog made a strong showing in part one of our eggnog saga. But did it stand up to the rigours of a full 10 days in a small glass bottle? Let’s find out.

Tom:
Noticeably different to fresh. Alcohol is slightly more pronounced and there’s a little more funk than when fresh; more fruity notes. The warming spice is still there, but overall it’s a bit less ‘soft’, somehow.

Ning:
This is not what I remember rum nog being. It smells fruitier somehow, as well as being somewhat wrong? The biggest difference is the texture – still creamy but much less slimy! It’s fruitier on the palate as well, but there’s a new, savoury edge.

Caroline:
It’s developed Bounty chocolate notes alongside dried yoghurt-covered apricots and rum n’ raisin ice-cream. I was expecting the rum to be at the forefront but it’s faded/integrated into the cream and it’s all thinner than I remember – should we have re-whisked?

Billy:
It’s all about the fruit for me – mango and pineapple sweetened with brown-sugar syrup. Sticky rum cake and nutmeggy sugar cookies pop up on the palate, along with a good soaking of fruity syrup. Definitely rummy.

Conclusion:
Nothing hugely negative here, but there’s also nothing to suggest that ageing has done this particular nog many favours. A slight increase in intensity, perhaps, but not much beyond that.

Our single malt eggnog played the villain the first time round, falling a fairly firm last in an otherwise successful roundup. Did it hold its own against the inexorable march of time? We’ve got the scoop.

Tom:
This has, in my opinion, become a lot better with age. Tonnes of white chocolate, with hints of dry wood and dunnage warehouse. For the record, it smells bad, but it tastes great.

Ning:
My memories of this particular nog were not fond, to be frank. The smell is now not-entirely-unlike a freshly mucked-out stable with new bedding and some silage in the corner… yum? Yet, despite this unique aroma, I like it better now. I’m as surprised as you are.

Caroline:
For me this is all about the soggy hay / rabbit hutch notes. I probably wouldn’t be offended by them elsewhere, but the presence of these in a milky drink is off-puttingly rancid to me.

Billy:
I’ve recently been investigating Asian spirits, and this has a definite kick of baijiu to me – pineapples left in a ditch for a little bit too long. I’m a baijiu fan (and love a bit of mulchy pineapple), but here it doesn’t really work. I will not be backing baijiu cream liqueur as the next trend in drinks…

Conclusion:
Well, we didn’t think it was possible, but single malt nog has gone from zero to musty, farmyard-y hero, while also becoming even more divisive. Eggnog for the adventurous of spirit. 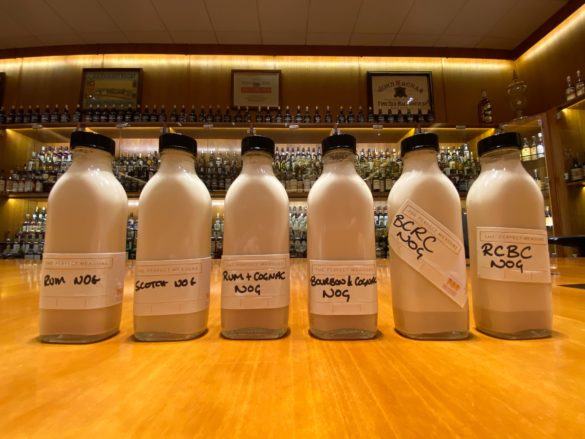 An unknown quantity, both philosophically and technically, this nog combines two high-scoring samples from round one into what should, probably, be a wild success. Results below…

Tom:
Very good. Fruit and spice and cream. The best so far although, I realise as I write this, I am using ‘best’ to mean, ‘closest to the un-aged nogs we made.’

Ning:
This was not what I expected to be perfectly honest. Much sweeter and fruitier, but not so tropical as the rum nog. It’s also slightly bitter. How? No idea.

Caroline:
The nose on this is much brighter than the others, and it’s got a mix of floral, fruit and spice notes that’s reminding me this eggnog thing isn’t bad after all…

Billy:
The most integrated of the lot – this is why you age things. Creamy, fruity, softly spicy – it’s quite nice. On the palate, there’s a bit of grapey fruit, but it’s all about cream and toffee.

Conclusion:
Arguably the safest, most-accessible and nicest-tasting nog. The sweetness, spice and fruit of rum and Cognac have merged together into a feast of creamy deliciousness.

Based on notes from the first session, this should be the clear winner. But in a field of baffling combinations and indirect comparisons, it’s anyone’s game. Onward.

Tom:
Something odd about this. If week-old eggnog can develop Old Bottle Effect, I feel like this has. Something of mouldy hay and dankness; damp cellar. For all of that, it’s still soft and creamy. I don’t hate it!

Ning:
A combination of my two favourite nogs from last time – a promising start. Warm brandy butter drizzled over vanilla ice cream (a younger version of myself is very happy right now) with a healthy dose of dry, oaky goodness.

Caroline:
This is the heftiest on the nose, which I think is thanks to an RSJ’s worth of vanilla and toffee from the bourbon. However on the palate it then develops into the damper notes Tom mentions, which are giving me flashbacks to the Scotchnog!

Billy:
There’s some woodiness here – fresh bunny-cage sawdust and a touch of chocolatey oak. Fruit pushes through that, with sour grapes and apples up against sultanas. The palate has a distinct whack of cheap liqueur chocolates, which I like a lot more than I should.

Conclusion:
The strangest of our five eggnogs by quite some measure, what with all the references to animal nests and the like. Certainly some resounding positivity in there, though! 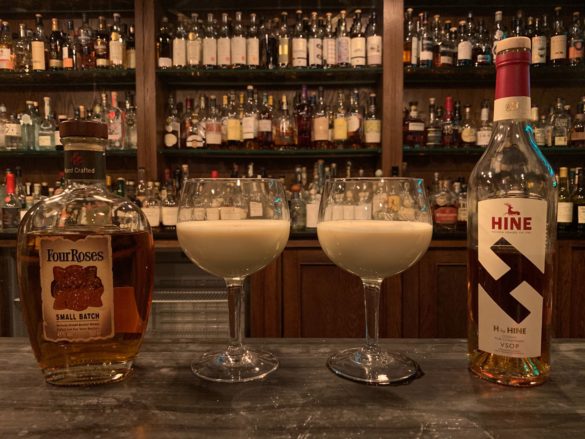 The Optimus Prime of eggnogs. The Megazord of dairy-based drinks. A towering amalgam of milk, eggs, sugar and booze. But how does it taste? Let’s see. Once more unto the breach…

Tom:
At this point, my frame of reference has been annihilated. For what it’s worth, though, this is smooth and well-integrated; boozy cream with a touch of spice and some fruity notes. Easy!

Ning:
I was a little overwhelmed by the smell of this one. Is it fruity? Is it vanilla-y? Is it oaky? Who knows? Not me. On the palate there’s a good dollop of Cognac – oaky and fruity – followed by vanilla, pineapple and, most disconcertingly, cheese. All in all, I long to return to the sweet simplicity of fresh bourbo-nog. Please?

Caroline:
While the spirits are fighting it out in the background the nutmeg has seen its chance to take over. This is pleasant enough but I don’t think the extra spirit has added anything useful. I’m voting for Rum and Cognac nog as the winner here!

Billy:
None more nog. I get the mulchy fruit of the Scotch-nog mixed up with sawdust and mulchy hay. On the palate, there’s an unrestrained booziness that pokes out around the edges of the other things I don’t like. The worst of all worlds.

RESULT: a draw between single malt eggnog and the cognac/rum blend.

We set out to answer a question. To sate our own curiosity, to educate the world and to put to bed forever one of life’s niggling, persistent queries. And yet, here, at the end of it all, we have only half an answer. “Should eggnog be aged?”, we asked. And we answer, “maybe.” 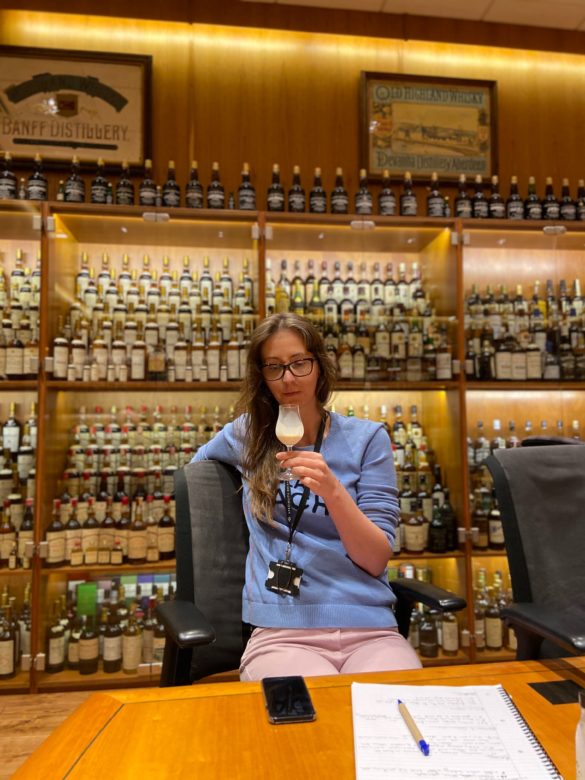 Using The Whisky Exchange boardroom for its intended purpose.

The various eggnogs really did change over the short time we aged them. They got funkier; some flavours rose to primacy while others were beaten into submission; nuances rose and fell like waves in a booze-spiked dairy ocean. But whether or not they got better or worse really does come down to personal opinion.

What we can say for sure is that it was a really fun experiment, and we suggest you have a go this festive season. It’s a great excuse to make a drink that is essentially a drinkable pudding.

*Since writing this we have discovered that some people do in fact age their nog outside the fridge. At room temperature. We cannot and will not advocate this. However, should you decide to go down this route, you might consider dialling up the alcohol and sugar content slightly…