No Comments on What booze works best in eggnog?

Project Nog: Into A Dairy Sea

There comes a point in everyone’s life – or so it seems to us here at The Whisky Exchange editorial department – when we (they? One?) must look around to our colleagues, a quietly bewildered look on our (their? One’s?) face, and ask, tentatively, the question: ‘have any of you ever tried eggnog?’ 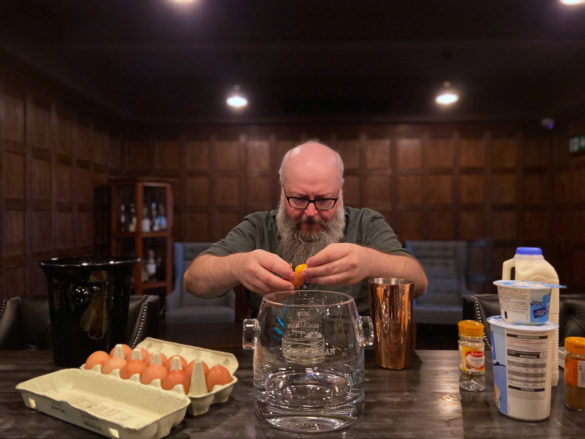 Billy focusing on, not for the first time, cracking eggs into a Macallan ice bucket.

The answer, in our small, lexical microcosm at least – aside from a mumbled, ‘is Advocaat eggnog?’ and the subsequent negative – was an almost unanimous, ‘no’.

I know, I know – we were as surprised as you are. But some good came from the acknowledgement of that horrifying void of knowledge and experience: we decided to make some – several kinds in fact – and to record our findings. Areas for study include but are not limited to:

Below, at length, are our findings – or at least the first iteration thereof. 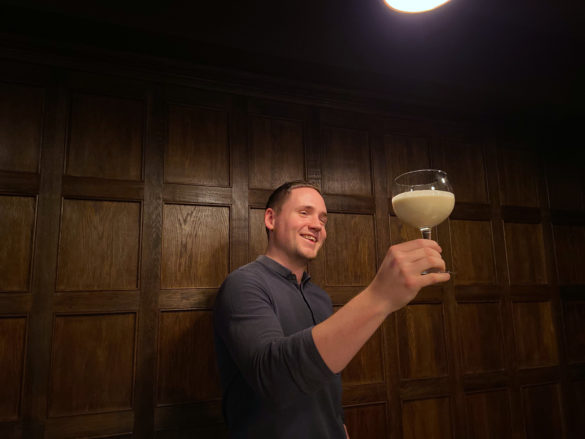 Eggnog, while perfunctorily a drink, has, to my eyes, more in common with a dessert than any kind of beverage. More objectively, it is a mixture of eggs, cream, milk, sugar and alcohol. There is not, I repeat, absolutely not, an argument that the blood-thinning effects of alcohol might help to mitigate the vessel-clotting effects of high-fat dairy.

How to make eggnog

We used a recipe which we found on BBC Food. We chose this recipe over others because, though many were very similar, the BBC recipe called for 100ml less double cream* than seemed standard. Healthy. 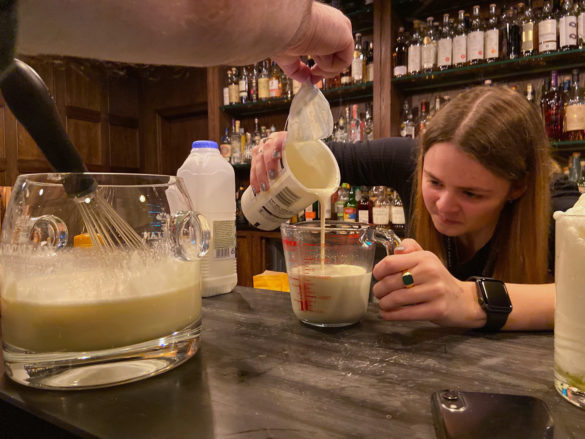 It is also true that, despite working for a drinks company, in a building in which people frequently make cocktails, we could not ascertain the whereabouts of a mixing bowl. Full disclosure: we used a Macallan-branded ice bucket. We gave it a good wash, first.

A final consideration, in quote form:

“Are we going to nutmeg it afterwards?”
“Yeah, I’m gonna nutmeg it right at the end.” 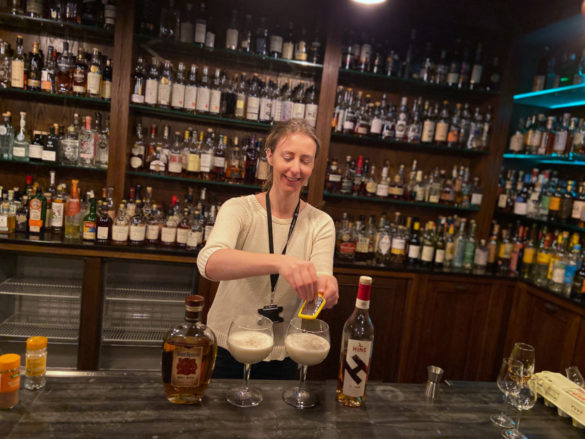 As discovered during our nog journey, grating nutmeg is a trickier skill to master than you might think. Fortunately, Caroline is a veteran nutmegger

Which spirit makes the best eggnog?

Wouldn’t you like to know? We certainly did, so we made four variants. For science. 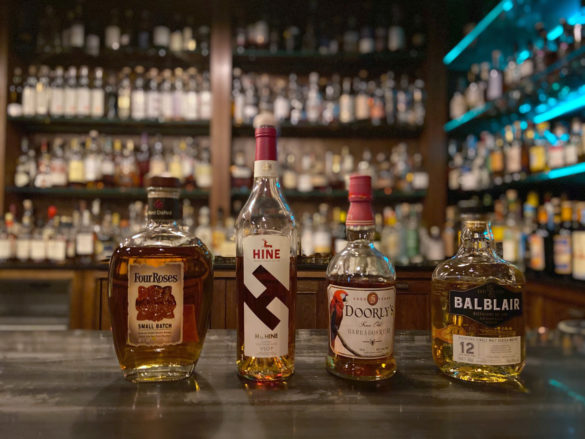 Our spirits of choice

To make our rumnog, we added 80ml of Doorly’s 5 Year Old Barbados Rum to 200ml of our base nog.

Tom:
Rum-nog is lovely. A little spice, a little funk, some tropical fruit. Works very well with the nutmeg. Magic.

Ning:
This one was exciting. Tropical, fruity and a little weird – perfect. Only downside was the texture.

Caroline:
Agree with Tom, the flavours are great (not too much of a surprise with Doorly’s involved) this one feels like it just fits. 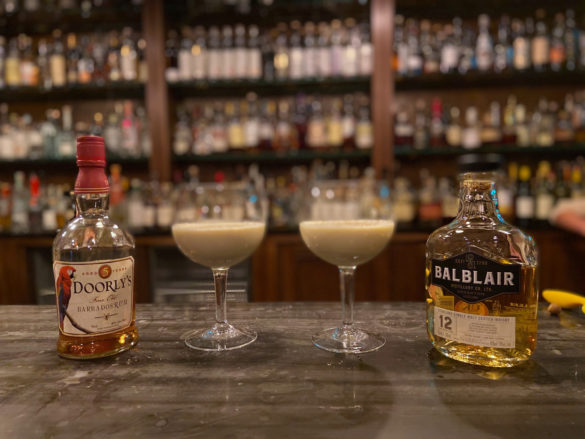 To make our bourbo-nog, we added 80ml of Four Roses Small Batch bourbon to 200ml of our base nog.

Ning:
It’s like an alcoholic milkshake isn’t it? Not as sweet as I expected it to be, but there’s lots of yummy vanilla-goodness.

Caroline:
The overwhelming impression I get from this is white chocolate Magnum ice-cream. You can feel the bourbon influence in there, not only from this vanilla note but also the way it works seamlessly with the nutmeg and brings toffee and red fruit to round out the palate, but it’s that indulgent finish I’ll remember.

Billy:
It’s all about the ice cream over here too, although I was surprised by the amount of toffee and oakiness I got running through the middle.

To make our single malt nog, we added 80ml of Balblair 12 Year Old Highland single malt Scotch whisky to 200ml of our base nog.

Tom:
A little cold and dark in comparison to other iterations. Interesting. More complexity than rum and Cognac, but also a little less sweet and warming. It is what it is: egg nog for single malt enthusiasts. Worth noting that this is the one I keep coming back to, if only to try and work it out.

Ning:
Nope. Not for me. Bring back the bourbo-nog!

Caroline:
There’s a slightly disconcerting green Weetabix note to the whole thing. Not sure I could serve this to most people.

Billy:
Caroline and Ning tried to hide their reactions (well, Ning shouted ‘Nope’ loudly, which is sort of hiding, for her), so I was expecting not to like this, but I was surprised. I got Loads of chocolatey notes – like white and milk-chocolate liqueur-filled bonbons. Although, the type you find at a petrol station on the way to someone’s house rather than one’s you’ve sought out.

To make our Cognac nog, we added 80ml of H by Hine VSOP Cognac to 200ml of our base nog.

Tom:
My immediate thought is that Cognac in egg nog is good. Less spice than any of the others, very smooth and warming. If you have a sweet tooth, this might be the one for you.

Ning:
Almost as if the brandy butter went wrong in the best way possible. Sweetest of the lot but not in a bad way, might have to make this one on Christmas.

Caroline:
More floral, fruity flavours than the bourbon nog, and gives the nutmeg a lot more room to shine. Feels like a more elegant touch on this trucker of a cocktail.

Billy:
All the brown sugar and caramel – almost getting to crème caramel territory – and strangely delicate for something so full of cream. Default nog. Good nog. Cognog. 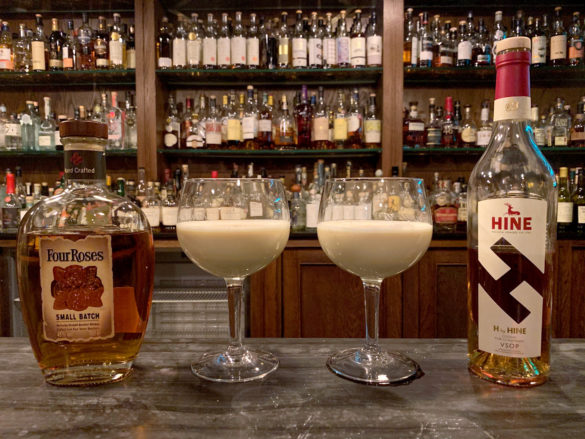 The sheer daring of bourbon nog (left) cannot be overstated.

Should eggnog be aged?

ONLY TIME WILL TELL. Come back next week to find out…

*This being said, the question, ‘shall we just go for broke and double everything?’ was asked remarkably early in the process.