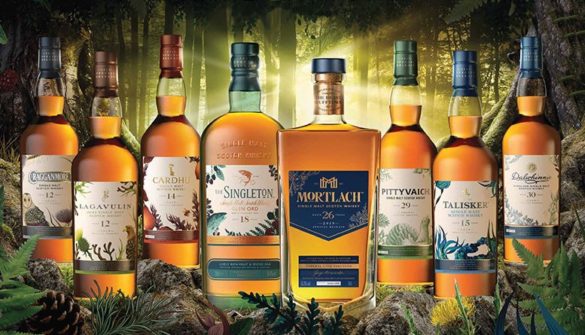 Announced back in July, the Diageo Special Releases 2019 have now been unveiled. The yearly range is a fixture of the whisky calendar, and the past few years have seen a number of changes.

This year’s line-up of eight whiskies stretches from a punchy, sherried Cardhu to a surprisingly-smoky Cragganmore, checking in with a few old favourites on the way.

Caroline, Ning, Tom and I got to try them.

A cask-strength version of my favourite entry in the Singleton range. Originally only available in the far east, Singleton of Glen Ord has been difficult to find elsewhere, so this is a welcome appearance. It’s been matured in ‘freshly charred American oak hogsheads’, by which I suspect they mean dechar/rechar casks.

For more cask info check out our Glossary of Terms.

Nose: Very delicate, with faint notes of smashed apricots and raspberry jam on scones topped with lashings of cream. Chocolate-covered cherries join the party, accompanied by peach and cereal notes, and a hint of wet bramble hedges.

Palate: Notes reminiscent of Grande Champagne Cognac at first. Leather, apricot frangipane, and some mint, alongside the return of those chocolate-covered cherries. Oak spice and tart citrus balance out the sweetness.

Finish: Portuguese custard tarts on top of oak floorboards, with some lingering fruit and a twist of seasoning.

Palate: Buttery notes are quickly washed away by citrus. Spice rebuilds from the back, exploding a ball of prickly cinnamon in the middle of the palate. Things then cam down, revealing orange peel, candied lemon and a touch of polished oak. Hints of mint chocolate sit at the back.

Comment: Almost exactly what I’d expect from an 18-year-old, adding some extra oomph to the regular bottling with both an extra kick of ABV, and more fruit and spice.

Pittyvaich is often described as rare – it was only open for 19 years and closed back in 1993. This is the third Special Release from the distillery since 2015, ‘double-matured’ in oloroso- and Pedro-Ximénez-seasoned casks.

Nose: Plenty of citrus to start with, followed by Irn Bru, marmite on toast, vanilla, butter and strawberry jam.

Palate: Malty at first, it mellows quickly into vanilla, marmalade, buttery toast and flowers. There’s a hint of something spicy, hidden below a layer of sugared-almonds, fizzy drinks and lemon sherbet.

Palate: Creamy texture leading into a complicated palate. Sweet orchard fruit tussles with oak spice, and the fruit wins in the end. The fizziness is back, with sour sugar notes balanced by spiced shortbread. Buttery pastry develops, filled with uncooked apple and ready for the oven.

Comment: It wouldn’t be a Pittyvaich if it wasn’t a little out of the ordinary, and this combines last year’s yeastiness with a load of fruit to create a very interesting dram – I suspect it’ll split opinion.

A long-aged and unfussy dram from the Highland favourite (yes, I know it’s legally a Speyside, but that’s just an artefact of parish boundaries and they still call themselves a Highland distillery). A combination of refill hogsheads and butts, matured for more than 30 years – that’s what I’m looking for.

Nose: Raisins and spice with leathery hints kick things off. The leather quick fades to reveal freshly polished oak and lightly spiced baked apples. Minty notes creep in around the edges, along with fresh, green leaves. These slowly sweeten into grassy spring meadows with stacks of hay around the edges.

Palate: Sweet and floral to start, with wax-polished oak as a backdrop. Slices of apple and pear follow, with candied flowers and a hint of both zingy lemon zest and bitter pith. There’s biscuits at the base – shortbread, and oatmeal and raisin cookies – all dipped in a bowl of single cream. Spice builds through the middle along with herbal leaves: mint, menthol and a sprinkle of cinnamon.

Comment: The dram is a bit of a journey. It’s more delicate than the notes above suggest, with a gentle, almost traditional lowland character of grass and hay. A dram that rewards dedication.

The first of the big sherry casks, matured for a relatively short 14 years in amontillado-sherry seasoned hogsheads. Amontillado’s nutty and elegant character should give us something a bit different to the more classic oloroso casks.

Palate: Bright and zesty before a rapid descent into seasoned wood, integrated nicely with grilled-orange notes. Sherbet lemons still floating around up top.

Finish: Everything stays; orange, wood, char and a touch of fresh greenery.

Nose: Caramel sauce and hazelnut brittle with a background of almonds and Italian nutty pastries – panforte bianco. The sweetness becomes fragrant but sharper, with wood polish and waxed lemons taking over. The caramel notes remain along with a handful of oatmeal and raisin cookie.

Palate: Rich and thick, with singed toffee and caramel sauce up front. Dark fruit-cake notes build, with burnt edges and a touch of glacé cherry. Chocolate sauce is poured on top before the addition of a sprig of mint. Soft spice and rich ginger cake complete things.

Comment: An immediately sherried dram, with toffee and nuts jumping out of the glass. The palate continues that in spades – one of the lovers of sweet sherried drams.

A whisky that confused me from its original announcement until the moment I put it in my mouth: ‘A complex and intriguing bottling that combines Speyside elegance with a touch of spice and smoke.’

This is the first-ever release of smoky Cragganmore, matured in refill American-oak casks.

Palate: Oily ash coats the mouth, along with bitter lemon and a flash of orange bitters. Bark and moss come in from the forest, bringing with them a shadow of something weightier, almost stuffing-like.

Palate: Softer smoke than on the nose, with spiced toffee and sponge cake accompanied by a distant leafy bonfire. Hints of tar and dockside rope develop but disappear behind sweet grain and milk chocolate. Candied orange and spice build through the centre, along with smoky flamed peel.

Comment: A surprisingly smoky from a distillery that I didn’t realise made smoky spirit. I think we’ll see this one disappear quickly – it’s an interesting new take on an old favourite, and rather good with it.

After last year’s stellar Talisker 8 Year Old, I was intrigued as to how they’d follow it. With the regular unpeated Caol Ila dropped from the line-up, I was wondering if this could fill the gap – a dark and spicy aged for 15 years sounds like a good swap.

Palate: Earthy and mulchy to start – piles of damp autumn leaves. The darker notes from the nose remain but are joined by sweet chocolate sauce and liquorice. Leafy notes become sweeter, with herbal notes developing. Sweet fruit sponge drops in from above but darkens to become dark fruit cake with a handful of chocolate chips.

Comment: Does exactly what it says on the tin – it’s a Talisker, and it’s deeper and spicier than usual. It may have lost its sea-salt and black-pepper trademark character, but it’s still got a touch of shoreline in with a whack of tasty darkness.

The one remaining regular in the line-up and very much and old favourite. Aged for twelve years in refill American oak, you can get a much rawer Lagavulin than this – no frills, just a punch of southern-Islay character.

Nose: Sweet green peat and sharp apples – a fire in a damp orchard. Briney edges are balanced by sweet fruity chews and a hint of anise: Fruit Salads with maybe a Blackjack thrown in for good measure. Earthy notes sit underneath with a zing of brine and menthol.

Comment: It might be the last surviving mainstay of the range, and it slots right back into its niche. Both sweet and more minerally than other years, it shows the punchy side of the spirit that we expect in this yearly release.

Last but far from least, the really sherried one – there had to be one. While I was hoping this would be a 26-year-old refill bourbon, that was never going to happen: Mortlach goes with sherry and the Mortlach fans want sherry.

This one has taken that to the max with maturation in first-fill oloroso- and PX-seasoned casks. It takes a heavy spirit to stand up to that, but fortunately, the Beast of Dufftown has teeth…and a bit of weight.

Nose: All those notes from re-doing your house: stewed black tea, jam on toast, open paint pots and varnish tins. Then it becomes a dried fruit fiesta, with raisins joined by hot apple upside-down cake with oodles of caramel. A sulphury note does attempt to push through, but the fruit smacks it down.

Palate: Less weighty than first expected, oily but with drying tannin. Lots of hot caramel notes, veering slightly into varnish, are joined by intense clove, plum and liquorice notes. There’s a big wedge of fruitcake too, the kind with lots of spice and dried orange peel.

Nose: Leather and tar at first, but with a wave of dried fruit quickly following on behind: a handful of raisins, a bucket of sultanas and a river of caramel-apple sauce. Lumps of polished oak float by, accompanied by ginger cake, toffee sponge and caramel cake bars. Char notes build.

Palate: Spiced sponge cake, burnt raisins and lots of dates. Sweet spice gradually builds, with butter pastry draped over the charred fruit. Berry and menthol notes develop – blackcurrant lozenges? – as well as butterscotch candy and cinnamon toffee. Caramac bars are a surprise, creamy addition before a wave of berry jam pulls us back down into fruity darkness.

Comment: A well put-together sherried dram that will please Mortlach fans. There was much potential for this to go off the rails and turn into a bit of a jammy mess, but it doesn’t – if you like a big sherry-cask dram with stuff going on, you’ll enjoy this.

To learn more about the series’s history, head over to our Diageo Special Releases – what are they? post.

When will they be available?

We’re not sure yet – hopefully in the next few weeks.

Wonderful write-up, and some interesting releases! The Mortlach sounds great!

[…] You can also find my full tasting notes over on The Whisky Exchange blog – The Diageo Special Releases 2019. […]

Thank you for the tasting notes -they certainly put the flesh on the bones of what was, on paper, not a particularly exciting and rather small line up. I always look forward to these releases and have purchased quite a few over the years.

For me, the Cragganmore sounds the most exciting and it’s reasonably priced too.

Wouldn’t the Annual Releases be a great platform for the first bottling(s) of Roseisle? Of the current Diageo distilleries, the only two for which we’ve never seen a Special Release besides Roseisle are Cameronbridge and Glenlossie.

There are often rumblings about Roseisle, and if it does appear I suspect it will be in the Special Releases. It can make such a different range of styles of whisky that they could definitely put something interesting together.