The next tasting in what was turning out to be a mammoth month was back in Vinopolis again: Old Pulteney, conducted by affable distillery manager Malcolm Waring, who gave a very interesting presentation on the history of Scotland’s most northerly mainland distillery.  Old Pulteney is well-known for its great value 12 and 17 year-olds, which both went down extremely well (the 17yo is terrific for around £40 on offer at present), but I hadn’t tried the 21yo or 30yo before – both were excellent, with lipsmacking spicy oak and chocolate / honeycomb notes. 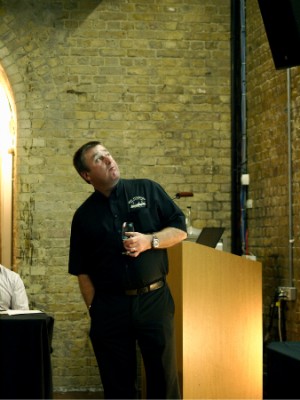 My favourite dram of the night, though, was one of the two new 23yo editions which, after successful launches in travel retail, are due on our shelves in the near future:

Palate:  Very tasty, if not overtly sherried.  Sweet, but far from cloying.  Good spices and tannic grip. In fact, from the lack of heavy colour and the general elegant subtlety of both nose and palate, I’m guessing that there was a significant proportion of refill sherry casks used here.

Comment:  Manages the difficult job of being smooth and classy on one hand, while also perky and interestingly complex at the same time.  Top quality spirit, expertly put together.  Another excellent Pulteney. 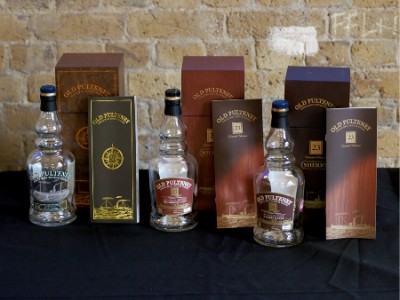 The three stars of the show - 30yo, Bourbon & Sherry Casks

Many thanks to Malcolm Waring for coming all the way down from Wick to talk to us, and also to Phil Storry for the photos of both this tasting and the Aberlour one from a few posts back.

In other news, it seems that Chivas Brothers, the whisky division of Pernod Ricard (whose portfolio includes Glenlivet, Aberlour, Longmorn, Scapa, Royal Salute, Ballantine’s and Chivas Regal) are launching a campaign for more age statements on whiskies.  This is a very interesting move (quite apart from any political implications, presumably this means that the Aberlour a’bunadh – one of the most prominent mainstream no-age-statement single malts – will be getting an age statement pretty soon) and one that probably deserves its own blog in the near future – watch this space.

[…] with one of my first tastings at TWE Vinopolis (in the dark days before I came to work here) being a trip through their whiskies led by distillery manager Malcolm Waring, and more recently having a great time wandering around […]

Malcolm is not looking for divine inspiration, he is wondering why someone up above disagrees with the biblical words of Jim Murray “The 17 is a better dram sayeth me”