In April 1999, a single click of a mouse kicked off a new venture for Sukhinder and Rajbir Singh – they registered thewhiskyexchange.com. Now, twenty years later, we’re the world’s largest online specialist spirits retailer and have two London shops, as well as two decades of stories. It’s time to celebrate.

To kick off the birthday festivities, we’ve bottled six single-cask whiskies with our friends at Signatory – who celebrated their 30th last year – to join a tasty range of exclusives that we’ve already released. They’re all available now from our website, and from both our Covent Garden and Great Portland Street shops. 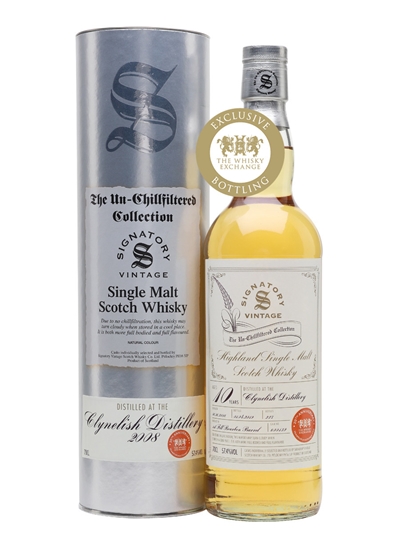 We kick off the range with something that’s always been on the menu for us over the past twenty years – a single cask of Clynelish. This is about as classic as you can get, with 10 years in a first-fill bourbon cask adding a slab of rich vanilla to the distillery’s fruity character. There’s not as much waxiness as in some, but this is an excellent every-day drinker.

Palate: Soft, sweet and rounded – much lighter than the nose suggests. Cream and orchard fruit leads – apple flan with single cream. Spice builds along with darker notes of milk chocolate, cinnamon and liquorice.

Comment: A rich and rounded dram with creamy vanilla balanced by fruit and spice. 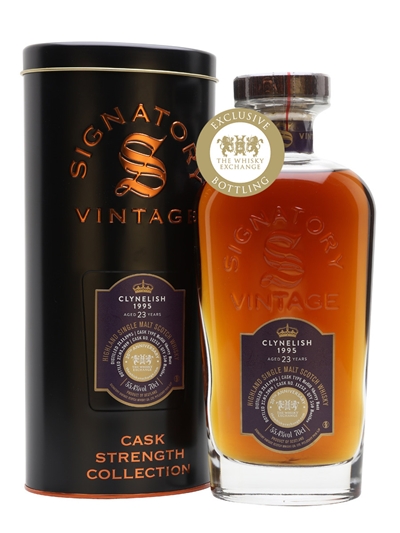 We continue with another old favourite: another Clynelish. This time it’s a 1995 from a refill sherry butt, a style and vintage that we’ve been exploring for a few years, since my first trip to Signatory’s Edradour warehouses – we were introduced to a row of casks hiding in the corner that we’ve been returning to whenever we’ve been able to. This one has more of a sherry kick than some of our previous bottlings, but it still has Clynelish’s fruity, nutty and floral side poking out from behind the rich raisins and cherries.

Nose: Chocolate, raisins and berry jam to start. Sugared almonds and honeysuckle build from behind, with a side of toast, butter and blackcurrant jam. Cinnamon sugar and aniseed notes – the savoury centre of an aniseed without the heat.

Palate: The aniseed leads into a more savoury palate than expected, with leathery sherry balanced against sweet almonds. Fruit cake builds through the middle, dark and rich, with extra glacé cherries. Floral touches sneak in around the edges, followed by dark treacle toffee.

Comment: A dark and weighty Clynelish, heavily influenced by the cask. But the distillery character is still there, with floral, nutty and fruity notes breaking through the sherry. 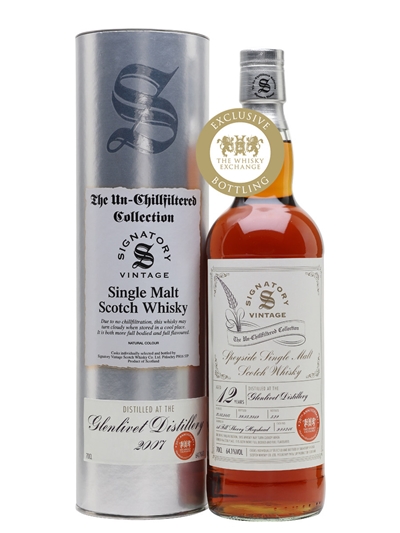 Another dram that might look familiar to those who have been following our exclusive Signatory bottlings over the past few years – a heavily-sherried, high-strength Glenlivet, bottled relatively young and packed with flavour. It was matured in a first-fill sherry hogshead and bottled at 64.1%, the lowest strength yet for the series but far from the least punchy.

Nose: Red and orange boiled sweets, with floral notes on top and raisins underneath. The fruit is intense and pulls both to the dark and stewed and the light and fresh: crisp apples and gummi bears face off against raisin jam and orange bitters.

Palate: The dark fruit leads, with rich raisins, sultanas, dates and prunes backed up by big spice: cinnamon fireballs and freshly-grated nutmeg. As that calms, the orchard fruit and gummi bears from the nose are revealed. Liquorice notes develop.

Comment: Don’t be fooled by the fresh fruit notes – this is a bit of a beast. The intense dark notes are carefully balanced by the light, but it’s still rich and very sherried. 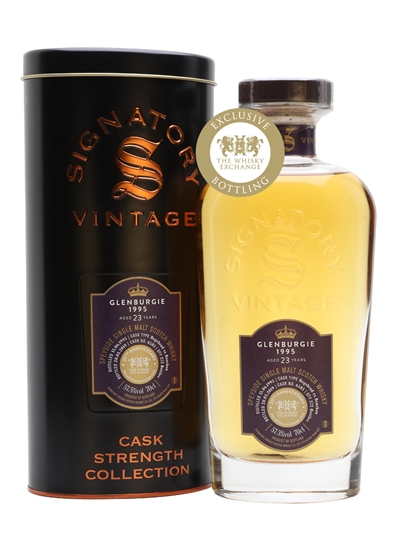 Our first Glenburgie from Signatory, but I suspect not our last. The distillery’s reputation has been rising over the past few years, with both youthful and well-aged releases picking up praise from whisky fans around the world. We went for an older, more elegant whisky to celebrate our birthday, with this 23-year-old bottling zeroing in on the sweet, fruity notes and hints of honey that we’ve been looking for in drams from the distillery.

Nose: Candied peel and Love Heart sweets, floral and fruity with a touch of melon and blossom honey. Grassy notes – both freshly-cut and dried – build, bringing a touch of spice and greenness.

Palate: More fruit, with the peel notes joined by baked apple with sultanas, a sprinkle of brown sugar and a liberal dusting of cinnamon. Roasted bananas and poached pears develop.

Finish: Candied peel returns, with lingering spice and a touch of polished oak.

Comment: An elegant dram that carefully balances fruity notes with the soft spice of careful ageing. 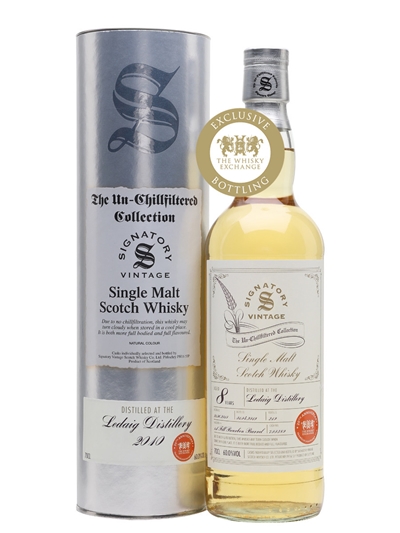 I really like Ledaig. Since I first discovered smoky whiskies from Tobermory – Ledaig is what they call those drams – more than a decade ago, it’s been among my favourites. Finding that The Whisky Exchange gang were also fans when I started working here was both a delight and a relief. The distillery is well known for making peaty spirit that does very well while still comparatively young, and this 8-year-old whisky shows off the classic balance of big smoke, medicinal notes and seaside tang.

Palate: Damp ferns and rock pools, with a touch of cracked-stone minerality and liquorice sweetness. It’s mouthwateringly intense, and as it calms, dark chocolate and lime peel are revealed. Rich earth mingles with sweet peat smoke in the background, with a hint of TCP right at the back. 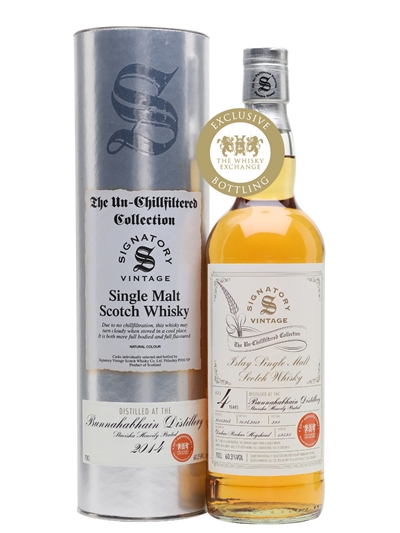 And finally, the whisky that most surprised us when we were choosing what to bottle for this batch of releases – a four-year-old smoky Bunnahabhain. We’d asked to try some Staoisha – the name that Bunnahabhain uses for this particular style of smoky spirit – and had to check the label of the sample bottle several times when we saw its age: it’s obviously youthful, but with so much more depth of character than we expected after four years. Aged in a dechar/rechar hogshead – a used cask where the inside is planed back to reveal fresher oak before being recharred – it has picked up impressive complexity and had its rough edges rubbed off, creating a punchy but easy-drinking, smoky beast.

Comment: A big hit of smoke and complexity beyond its years – maritime, fruity and tinged with darkness.

This is just the start of our anniversary year. We’ve got loads planned for the upcoming months, with more exclusive releases, as well as competitions, special offers and more. Keep an eye on our 20th anniversary pages – where you can learn more about our history and the key events of the past twenty years, as well as discovering the bottles that have shaped us and the industry – where you’ll find all of our exclusive birthday releases and much more.