No Comments on Whisky Show Bottlings 2021 – Adventures in Flavour

Whisky Show is almost upon us again. It’s our lucky 13th show – 12th in person – and the first year where we are combining our traditional weekend of whisky at Old Billingsgate with a whole host of online virtual sessions. We’ll be mixing up online and real life from 1-3 October and then going fully virtual from 4-6 October. You can find full details on the Whisky Show website.

But enough show shenanigans – what about the special Whisky Show bottlings? Well, we are very pleased to announce their arrival: Adventures in Flavour.

Every year we produce a range of whiskies for The Whisky Exchange Whisky Show, and the past few years have seen Elixir Distillers’ creative director Raj ‘Mr C’ Chavda go further with his label designs than ever before. We’ve seen lenticular 3D, riffs on modern art and labels covered in UV sensitive ink, but this year he’s stepped back in time and added a classic twist – comic book heroes and anaglyph 3D. 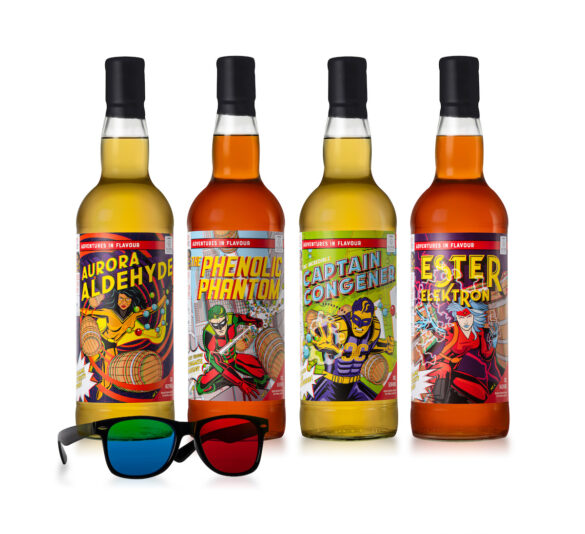 Inadvertently, I helped Raj come up with this year’s idea:

“I was thinking about the show theme – a journey through flavour and having just completed my WSET Level Two Spirits qualification with Billy, words like ‘phenol’ and ‘congener’ came easily to mind. I started to think about what makes up flavours themselves and imagined these compounds as the heroes of whisky.”

As a comic book geek, it was fascinating to see Raj’s process of pulling part old silver-age covers and reassembling them as whisky labels, as well as creating his four superheroes of flavour, each named after something that gives whisky its character:

Along with the superheroes, each bottle comes with a pair of 3D glasses, which reveal hidden depths and layers in the labels.

I sat down with Raj to dig into his ideas a bit more:

But enough about the labels, what about the whisky? 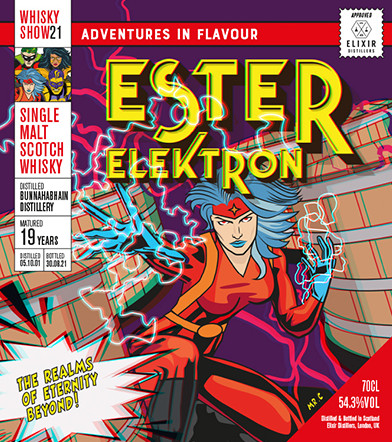 A 2001 vintage from the Islay favourite, matured in a sherry butt. It’s a classic from the distillery, with all the rich fruit and rancio that you’d expect. Bottled at 54.3% ABV and priced at £150. 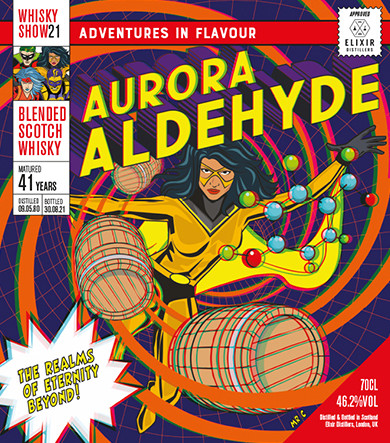 A long-aged blend that has spent a large chunk of its recent life in a single sherry butt. We don’t know for sure what’s in it, but if you’ve seen similar whiskies to this around recently, you might have some guesses. Bottled at 57.6% ABV and priced at £240. 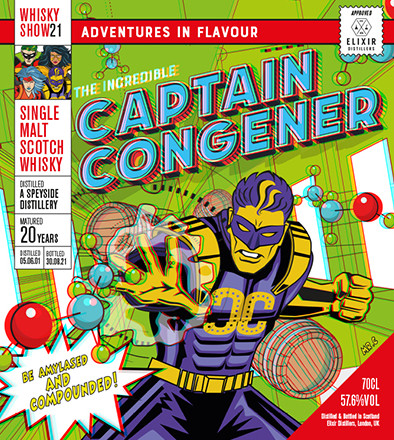 We can’t say any more about where this is from, which in turn might help you guess which family-owned producer it is who has asked that we don’t tell anyone its provenance. This one came from a sherry butt, the type this distiller is well-known for, is bottled at 57.6% ABV and priced at £135. 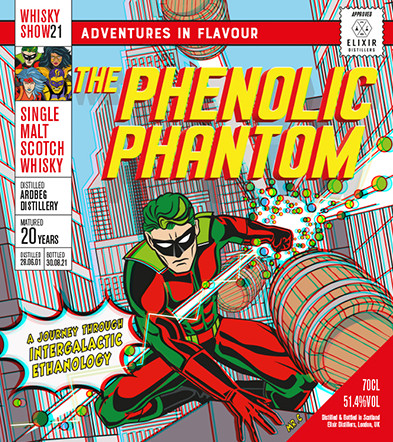 Last in the Adventures in Flavour range, but from from least, we have something rather special from Islay – a refill-bourbon cask of Ardbeg. Filled in 2001 and bottled this year, it’s a classic Kildalton dram and a cracking Ardbeg. Bottled at 51.4% and priced at £450.

Palate: Sweet and smoky, with apple-and-cinnamon syrup poured over warm croissants, all topped with baked apples and pears. Mintiness builds through the middle followed by green leaves and driftwood. Seaside smokiness and salty sea air surrounds everything. 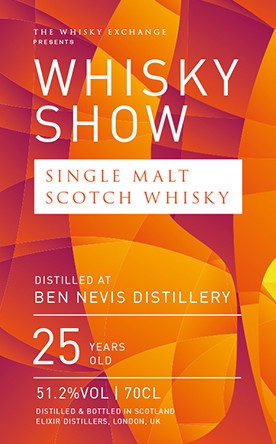 Alongside the Adventures in Flavour, we also have a bottle to celebrate Whisky Show’s return to being in real life. There are only 100 bottles of this cracking Ben Nevis, from the fabled 1996 vintage, and it’s packed with all the fruit and spice you’d expect. It’s bottled at 51.2% and priced at £250.

Nose: Buckets of fruit and spice: chilli flakes and black pepper sprinkled on apples, pears, pineapple and mango, all topped off with a handful of gummi bears. Butterscotch pastilles and vanilla cream float throughout the gaps.

Finish: The spice lingers, with layers of fruit and dark sugar circling as they fade: apples, pears and muscovado.

Comment: A fantastic combo of fruit and spice, with layers of both spanning the spectrum from fresh fruit salad to rich fruit cake.

How do I get one?

All five bottles will be on sale from the on-site Whisky Show shop for attendees of the show. Those who have virtual-only tickets will be sent a special secret link for them to be able to grab a bottle from our website. However, they are all very limited, so if you are one of the lucky ones who have a chance to pick up a bottle, don’t hang about…

In the meantime, there are still a few tickets to the physical show as well as virtual passes if you can’t make it down to London this weekend – you can find them all at the Whisky Show website.