There’s been a few reviews of this forthcoming Balvenie release already, so I thought I might as well stick my oar in.  These Balvenie 17yo’s have been coming out pretty regularly for a while now and have without exception sold extremely well.

In particular, the Balvenie’s previous foray into peat, the Islay Cask, went like a rocket and has now become something of a collector’s item.  The Islay Cask was a controversial bottling, as many punters wondered if it should really be allowed to be called a single malt, given that it had clearly been absorbing single malt from another distillery by being finished in an Islay cask.  Many distinguished nerds of the time were asking how that really differed from Grant’s practice of teaspooning a spot of Glenfiddich into casks of Balvenie to prevent independent bottlings of their single malts.

Of course, no-one was impolite enough to raise these thorny issues at the launch of The Balvenie Peated Cask a few weeks ago at trendy Islington nitespot The Old Queen’s Head.  First Drinks’ Balvenie ambassador Dr. Andrew Forrester had constructed a large playpen full of barley, and gave an enthusiastic chat before inviting us to play in his sandpit while the new arrival was brought to our tables.  I was forced to demur for the sake of my boxfresh blue suede Adidas, a present to myself for my 36th birthday the week before.

Unfortunately, in order to light a particularly recalcitrant peat cone (presumably for atmospheric purposes), an entire box of matches had been struck about 18 inches behind my chair by a doggedly determined PR girl a few minutes before the new tipple was introduced.  Once it was lit, nosing conditions were somewhat compromised and I couldn’t really trust my tasting notes on the night – not that that took away too much from some very good whiskies served later in the evening.  Thankfully, this was rectified by the generous provision of a 10cl sample in a goody-bag at the end of the night, the contents of which I can now re-evaluate under normal lab conditions (ie sitting at my desk with an hour or so to go on a Friday afternoon). 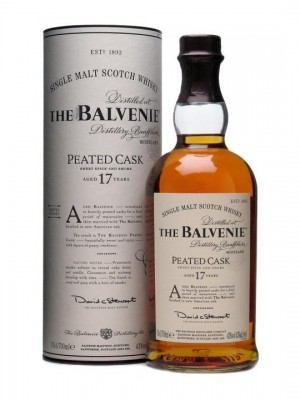 Palate: More immediate phenols, with coalsmoke, and burning newspapers.  These grow on the palate, becoming quite warming and astringent.  Much more savoury than the nose would suggest.  The fruit struggles to make its presence felt amidst the soot and burnt wood.  Becomes strangely salty towards the death.

Comment: A slightly confusing whisky.  The nose and palate don’t seem related at all here – the whisky seems caught between two stools, and out of its comfort zone (if you’ll pardon the mixed metaphors).  I’m a massive fan of Balvenie (in particular the 15yo Single Barrel and the sublime 30yo), and although I appreciate the nose and palate in their own ways, I just can’t reconcile them here.  However, I’m sure it will be popular, and I’m certain that there’ll be a tremendous kerfuffle, nay a frenzied stampede, when Grant’s eventually get around to releasing the peated spirit that filled these casks before they were used to finish this whisky.

So long for now –  have a nice weekend, folks.

[…] This post was mentioned on Twitter by Tim Forbes, The Whisky Exchange. The Whisky Exchange said: New TWE Blog Post: Balvenie Peated Cask 17yo Tasting Notes – There’s been a few reviews of this forthcoming Ba… http://ow.ly/18R158 […]

I pretty much came to the same conclusion. I couldn’t work it out. It felt like two malts having a go at each other in a bottle with neither winning. I’m not sure I get it.

i need to get my hands on it… sample that is.

Friend the guy who should know…

Agreed to “confusing”, but neverless appreciate the intrigue of this malt. Soft and warming and not burning. Got it in Antalya in September for 95 euros.

I am so glad the Balvenie guy is back in the Wall Street Journal. I have all the guys at the AUGUSTA COUNTRY CLUB drinking it. keep it up !!!!
Sam Penn, MD.

[…] don’t know, but maybe someone will be along to inform us. But it gets more complicated still: the Whisky Exchange blog informs us (shout out to Tim F!) that not all of the whisky that went into this release was itself finished […]