After a slight (ok, considerable) delay, the final TWE 10th anniversary bottling has finally arrived. Amrut has been one of the major success stories in the UK market over the last couple of years, and we’re delighted to present our own Amrut Special Reserve from this up-and-coming superstar distillery. 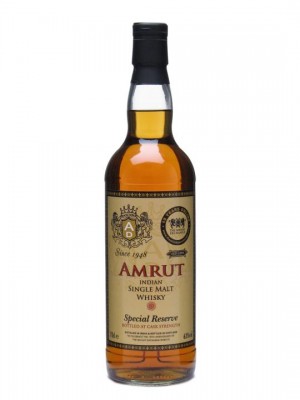 First, though, a quick update on some current events in the whisky world – and a salutary example not just of the immediacy of communications in the modern digital age (Yawn! We heard that one already!) but also just what a frenzied response the tiniest titbit of gossip about certain distillery names can provoke (Er, hang on – we knew that already too, didn’t we?).
Let me explain. It would seem that the respected whisky (and jazz) expert Hans Offringa yesterday mentioned that he had heard from a well-placed source that Bruichladdich had been sold and that Ardbeg was officially up for sale.
Cue a social media shitstorm on Twitter (would that be a Twitstorm?).  Within a couple of hours the rumours had mushroomed to the point where the more credulous reader may have been forgiven for believing that  Diageo had already bought Ardbeg and then swapped it for Bruichladdich. Talk about going from the sublime to the ridiculous!!

But like many storms, this cloudburst disappeared just as quickly as it had sprung up. It’s pretty easy to cause a self-feeding stir on Twitter, but anything swallowed by Twitter passes naturally into the rather more scrutinous large intestine of the various fora, which rigorously suck all the juice out of whatever comes their way and excrete the remains by peristalsis.

Above:  Those distillery rumours on their way through social media yesterday.

It quickly became clear that there was no secondary source to back up Offringa’s original rumours. With Ardbeg keeping stumm, Bruichladdich issuing a firm denial that it had been sold and Offringa quite rightly refusing to reveal his source, the Twitterati were left reaching for the Kleenex rather earlier than expected. In a brilliant face-saving move they have responded to this rather disappointing anti-climax by posting ever more preposterous rumours throughout today (check out #fridaywhiskyrumours). By Monday, the whole thing may be nothing more than a half-remembered tristesse. O Tempora, o mores!

Disaster averted, then. For a very short time yesterday afternoon it looked as though we were dangerously close to one of my January predictions actually coming true. 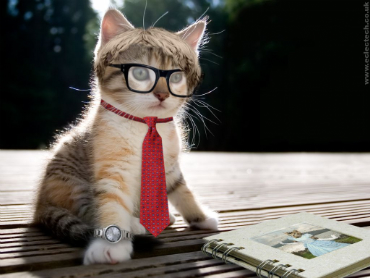 "Pull the other one, matey"

Thankfully this potentially universe-ending paradox would seem to have been avoided when it was all revealed to be a load of hairy old cobblers. The great Serge Valentin has already immortalised the moment in today’s Peat McPeat cartoon, reproduced below.  Although such an honour makes this unworthy blogger blush with pride (merci, Serge), I fear that my relative obscurity combined with the even less likely scenario of anyone who had actually read the offending blog in the first place retaining my warblings for more than few minutes could leave the vast majority of the great man’s readership scratching their heads. 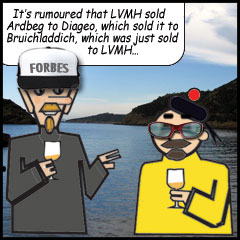 One for the grandkids

However, never let it be said that the TWE blog could be outdone on water-muddying speculation! Our hairy old cobblers are bigger than anyone else’s!!  Look, here’s proof: the far more clued-in industry site just-drinks.com has a proper journalist backing me up (ok, he looks a bit young but he’s sporting a truly journalistic smirk) in their blog a full fortnight ago!
It seems that we may all be doomed after all.
Anyway, enough of all this nonsense – let’s drink some of this lovely whisky!!
Amrut Special Reserve Cask Strength, TWE 10th Anniversary, 63%
Nose: Rich, with strong natural caramel and malt loaf aromas. Honeysuckle, baked pastry and polished wood. A couple of minutes’development brings baked apple and clove oil – leave it for longer and notes of damson sponge cake and an almost rum-like molasses quality emerge. Water adds a creamy character and reveals the sponge more quickly.
Palate: Good weight. Very, very powerful, dry and warming at cask strength, with roasted malt flavours, assertive oak and a strong dash of black pepper. Water, however, brings out a delicious honeyed malt character, with bourbonesque notes of seasoned wood, scones, plummy fruits, a wisp of woodsmoke & leafy hints. A picnic on a park bench.
Finish: A bit too hot to handle at full strength. When water is added (and this swims very well), the finish becomes a far more pleasing intermingling of honey, malt and oak.
Comment: A mature malt, confident and well-rounded. Possibly a bit over-assertive at its eye-watering full strength, but it really blossoms with water. A hugely enjoyable unpretentious dram, more than making up in exuberance what it might lack in sophistication.
OK, enough from me – have a great weekend.  I’m off to Wales for a week with my good lady – will post again when I get back.
Cheers,
Tim

So let me get it straight, Mark Reynier now owns LVMH 😉