Over the past few years we’ve been working closely with some of the world’s best independent bottlers to release whiskies exclusive to The Whisky Exchange. We’ve produced a range of great bottlings, but we’ve returned to one producer more than the rest – Signatory Vintage. 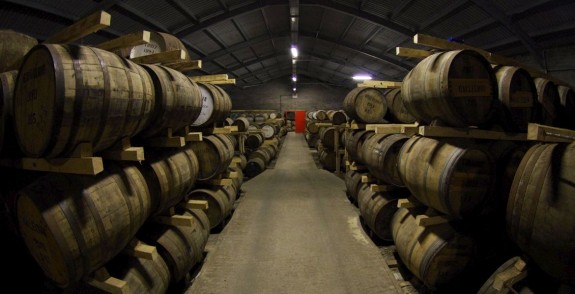 Andrew Symington and his team have an incredible range of casks in their warehouses at Edradour, and despite having seen inside a few years ago, I’m still impressed by the whiskies that they’ve given us the opportunity to have as exclusives.

This time we have three exclusive single casks: Clynelish 1996, Laphroaig 1998 and Glenlivet 1981. 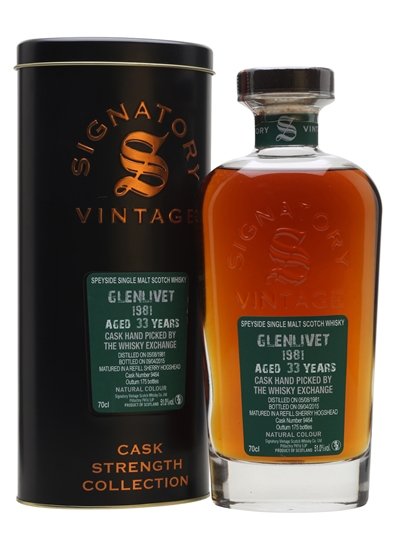 It was the Glenlivet that started it all. Last year, we chose an excellent 1981 vintage from the distillery and decided that we wanted another. Fortunately they had a sister cask – #9464 compared to last year’s #9460 – and with a bit of cajoling they let us have it as an exclusive release.

Palate: Lots of cream and grain to start, with orchard fruit bursting through the middle after a few moments. Darker notes develop and sit around the sides of the palate – sweet liquorice and stewed fruit – with cinnamon spice and crunchy apples building down the centre.

Finish: Apple and spice to start, fading to creamy apple sauce and a lingering hint of anise.

Comment: A sweet and fruity dram which has a well-balanced spiciness. Perfectly aged, with the cask allowing the orchard-fruit character of Glenlivet to shine through. 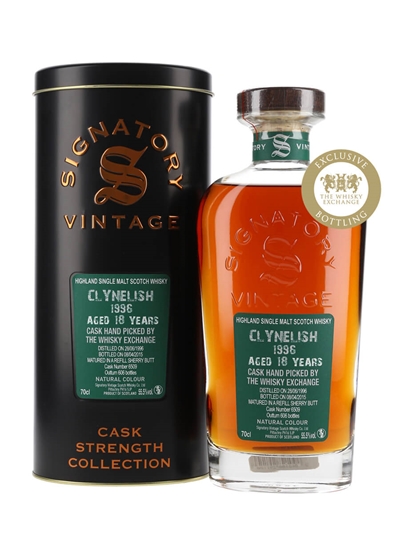 At the same time as asking about the Glenlivet, we decided not to waste the opportunity and requested a few more samples. First on our list, as it often is, was Clynelish. Last time we bottled a Clynelish with Signatory, a 1995 vintage, we were blown away by the quality of the whiskies they had to choose from. Asking for a similar cask was not a difficult decision.

While they were both matured in refill-sherry casks, the first was a classic Clynelish with sherry notes that grew the longer you left it in the glass, whereas this new one is quite the opposite:

Palate: After the heaviness of the nose, the palate starts surprisingly soft and rounded, with sponge-cake batter and sweet raisins accompanying spicy ground cinnamon. Apples and aniseed balls come in behind that, with fruity dark chocolate and vanilla cream icing softening the spicy heat. As the fruity core fades, rich earthy notes develop with soft nutmeg and stewed fruit.

Finish: Long and lingering, starting with caraway-spiced shortbread and apple crisps, before fading to rose water and dried fruit.

Comment: An intense, rich and mouth-watering dram, which opens up to reveal the traditional Clynelish fruitiness after a little time in the glass. One to savour as it develops. 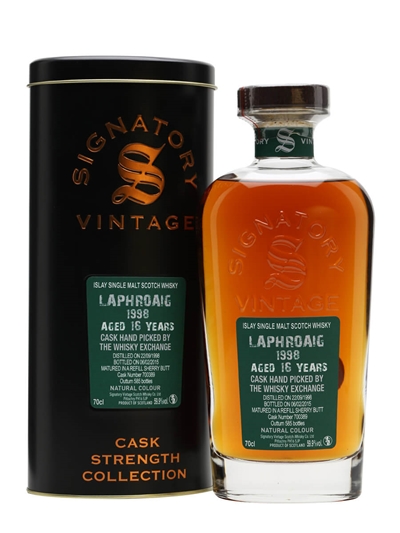 For our final choice we wanted something smoky, and remembering the range of casks in the warehouses from Laphroaig, we asked for one.

They sent over a selection of samples, and while there were stunningly fruity ex-bourbon casks, it was a refill sherry butt that we liked the best. Similar to the last cask of Laphroaig that Signatory bottled for us – a whisky that went on to win Whisky Advocate magazine’s Islay Single Malt of the Year 2014 award – it was just what we were looking for.

Nose: Rich and earthy to start, with damp soil, mulchy leaves and Laphroaig’s classic coastal notes – rock pools and sea spray. Leather jackets and raisins sit behind that, with medicinal notes bringing up the rear – TCP and menthol – along with bacon-tinged smoke. With time in the glass, sweet fruity notes step out from behind the smoke – candied lime, apple and star fruit.

Palate: Mineral-led, with slates and damp limestone joined by spiced apples and pears at the front of the palate. The flavours grow more intense, with Fisherman’s Friends, liquorice, dark chocolate and leather spreading across the palate. Despite the dark flavours and weightiness of the dram, it is still remarkably fresh, with the darker notes balanced by sweet fruit and a touch of salty caramel.

Comment: A densely flavoured whisky which successfully balances pungently peaty Laphroaig with sherry cask spice and sweet fruity notes. A dram that rewards a long examination – give it some time in the glass to reveal its secrets and you won’t be disappointed.

All three whiskies are available online and in our shop now.

@JohnnieStumbler @WhiskyExchange @cowfish haha… Me too, when are you going?

@JohnnieStumbler Well, we’ve got butts of the Clynelish and Laphroaig, so they should last until you get back / @WhiskyExchange @whiskytalks

@cowfish @WhiskyExchange @whiskytalks It’s the Clynelish that I want. If I manage to keep myself solvent, I’ll grab one upon my return.