Home   In Their Own Words   In their own words – Mickey Heads, distillery manager, Ardbeg

In their own words – Mickey Heads, distillery manager, Ardbeg

13 Comments on In their own words – Mickey Heads, distillery manager, Ardbeg 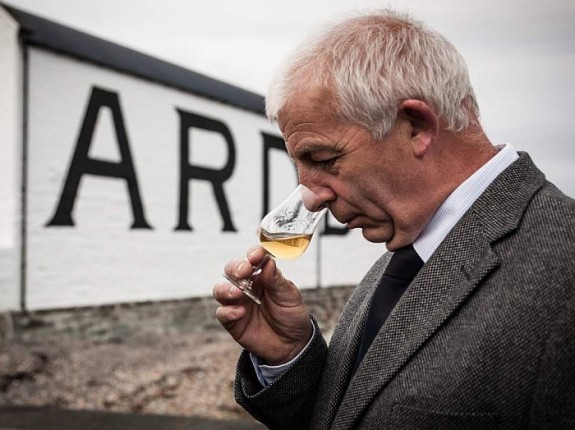 We recently managed to grab a few minutes before a whisky tasting with Ardbeg distillery manager Mickey Heads. Here’s what he had to say about life on Islay.

‘1 October 1979: I remember that date. I started odd-jobbing around the distillery at Laphroaig, and at the end of the first season I was sent out to the peat bogs to dig peats. That’s where it started for me’

‘I did not plan on going into whisky making, because both my father and grandfather were into it – my grandfather was head maltman at Port Ellen and my father was a stillman. I said no, I’m not going to work in a distillery’

‘I went on shift and did distillation and mashing. I did malting, warehousing, I did it all, bits and pieces as well. Ian Henderson [Laphroaig manager at the time] asked me to be assistant brewer, and I went from there. I think I’ve been in the right place at the right time a couple of times…’

‘I’ve been at Ardbeg almost eight years. Production is the big thing that’s changed since then – we’re working 7 days a week and have gone from 10 guys working up to 18 of us’

‘It’s great to see people at the distillery. Always come and say hello if you see me’

‘I get up in front of people to do a tasting and think, “Wait a minute, I’m a quiet island boy.” It takes a bit of getting used to’

‘I live 100 metres from my office. It’s a beautiful part of the world – I walk out the door and I can see Kintyre, the hills of Ireland, the reefs and all that: it’s a great place to live and work. I just enjoy the job; I think I might be a bit of an whisky enthusiast as well’

‘It’s interesting to look at the stuff we’re laying down now: it’ll probably be going into bottle when I’m not going to be there – I’ll probably be long retired and doing different things. I’m adding to what we’ve already done and looking to the future’

‘I’ve heard someone describe what we do as being a caretaker, and that’s probably a good word for it. One day somebody else will be doing it, maybe better than I will’

‘We’ve got a little croft, and I spend some time up there. A bit of fencing, a bit of ditching, getting my hands dirty. Plenty to keep me going and keep me fit’

‘We’ve had the Galileos and Alligators – they’ve got quirky names but the thing about them is that the quality is always very good. You need to keep your signature, but just give a little something new that people can discuss and enjoy’

Posted in In Their Own Words, Scotch Whisky
Tagged Ardbeg

What a top bloke!

I met a friendly old boy at the Ardbeg distillery the the other day. We had a quick chat about life and Ardbeg and then I asked him what his connection with Ardbeg was.

Oh! Most unassuming man you’ll ever meet. A true gent!

[…] make sure you kick back on Saturday with a glass of Ardbeg, and raise a toast to distillery manager Mickey Heads and his team. 200 years down – hopefully many more to […]

[…] first tasting I went to was Mickey Heads and the launch of Ardbeg Almost There, which is still my favourite young Ardbeg. A real baptism of […]