If you’ve looked at a bottle of Laphroaig over the past few years, then you probably know why 2015 is a big year for the distillery – founded in 1815, as they proudly state on their labels, it’s their 200th anniversary. As you might expect from a large number like that, they’re doing some celebrating, with events happening throughout the year, including lots of tastings during the Islay Festival in May and a big bash for their annual Laphroaig Live webcast. They are also producing a number of special bottlings, with seven rumoured releases on the cards. The first of these has just arrived – a revived Laphroaig 15 Year Old.

The distillery during Feis Ile 2014

Laphroaig 15 was originally launched in the 1980s. More elegant than the feisty 10 Year Old, over time it became a favourite, before disappearing in favour of the 18 Year Old, which continued the refined approach to Laphroaig’s classic Islay style. While the 18 has filled the gap admirably, there are still lots of Laphroaig 15 fans out there, so they have brought it back as part of the bicentenary.

The distillery did an initial release to the Friends of Laphroaig, their 630,000-strong online fan club, and it sold out in hours, after crashing their website. It’s now made its way from Islay out to the rest of the world, and it’s on our virtual shelves as of today: 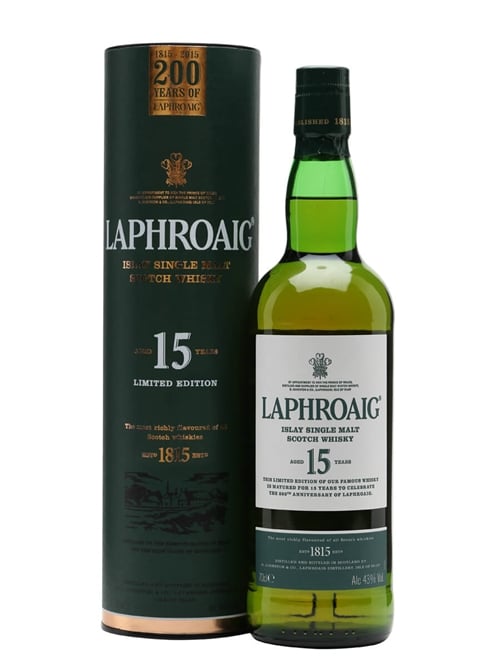 Nose: Sweet and fruity, with papaya, unripe mango and grapefruit up front, and spiced apple and pear behind. The smokiness is restrained but the trademark coastal and medicinal notes are there, with TCP joined by bung cloth, damp earth, coal dust and a hint of sea spray.

Palate: Soft and rounded with a fruity centre. Wrapped around that is earthy smoke and sweet liquorice, with gently tarry notes and coal smoke. As it develops, it picks up more savoury notes, with stony minerality complemented by a lick of brine.

Comment: I’m a big fan of the old-fashioned, fruity Laphroaigs, and this whisky has that character in spades. It’s not as in your face as the 10 Year Old, but has achieved its mellow nature through ageing, maintaining complexity and its core ‘Laphroaiginess’.

A great opener for their 200th anniversary limited releases. With whispers of 21- and 32-year-olds also being on the cards, as well as something special for their annual Cairdeas bottling, there is definitely more to come.

Great piece on the ltd edtn @Laphroaig 15YO by @WhiskyExchange’s Billy (aka: @cowfish): http://t.co/TfkxkcyWjB

RT @themisswhisky: Great piece on the ltd edtn @Laphroaig 15YO by @WhiskyExchange’s Billy (aka: @cowfish): http://t.co/TfkxkcyWjB

[…] as it has featured a few special releases. Things kicked off with the 15 Year Old back in April, and continued with an excellent Cairdeas bottling at the Islay Festival, […]