It’s strange how quickly something becomes a yearly tradition. It’s only the second time we’ve given our Whisky and Spirit of the Year awards, but it already feels like a festive fixture. The core idea was the same as last year: choose a shortlist of excellent spirits and whiskies, and then choose one as the best.

As with last year, we went for ongoing, regular releases. On the whisky front, they weren’t cask strength and they were all under £60 a bottle. Again, in common with last year, the choice of Spirit of the Year was almost unanimous, but the whisky caused a few more intra-office fights. So, we organised a tasting and dragged 70 whisky fans, as well as a few industry folk, down to our shop at Vinopolis to help us choose a winner. 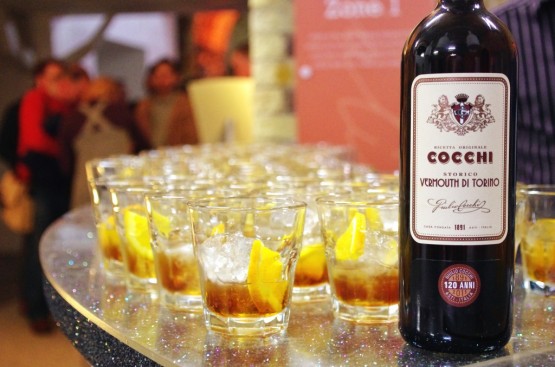 Cocchi Vermouth di Torino, served with ice and a slice (of orange)

We kicked off the evening with our Spirit of the Year: Cocchi Vermouth di Torino. You can read all about it in on our Spirit of the Year page, but in short, it’s a traditionally made, sweet, Italian vermouth – we know it’s not, strictly speaking, a spirit, but it wowed us enough to ignore that fact.

It uses moscato wine as its base and it’s aged before bottling, giving it a bit more depth. It’s been hugely popular in the bar trade over the past year, popping up not only on drinks menus but also in quite a few cocktails in Diageo’s World Class Cocktail competition. We served it in the way that we have, on occasion, been known to drink it in the office – simply, over ice, with a slice of orange. Tasty.

Aperitif down, we moved on to the main course of the evening: tasting the eight drams in our Whisky of the Year shortlist. The whiskies were tried blind, with each table discussing their thoughts on each before coming to a final decision. Votes were cast, with each taster choosing their top two whiskies – after we counted up the first choices, everyone who voted for a whisky not in the top two had their second choice counted instead. After the first round of counting, we were down to two whiskies that were ahead of the pack: Glendronach Revival 15 Year Old and Bowmore 12 Year Old… 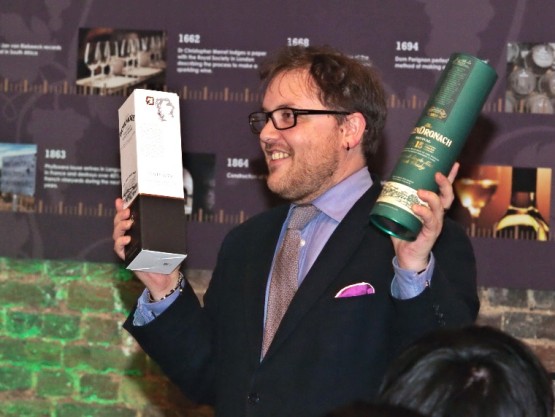 The second choice votes were reallocated and there was a clear winner: whisky number seven – Glendronach Revival 15 Year Old. It’s a rich, sherried dram that we’ve been big fans of since it hit the shelves in 2009. You can find out more over on our Whisky of the Year page, but in short: if you like sherried whiskies, then you really should try it.

The shortlist, plus an extra dram for everyone to try while the votes were counted

The runner-up: Bowmore 12 Year Old, a whisky that sometimes divides opinion, with its softer and more fragrant approach to Islay smoke, but in this case a clear second place. From there we had Glenfiddich 18 in third; Clynelish 14, Longmorn 16 and Aberlour 16 in joint fourth, Laphroaig 10 in seventh and Benromach 10 in eighth. The final two had their champions in the room, with Sam ‘Dr Whisky’ Simmons proudly tweeting that the Benromach was his favourite of the night, but in the end the room went for the Glendronach – another example of my usual rule when trying to guess whisky competition winners: always bet on sherry.

On that note, we also tried a ninth whisky on the night – a new TWE exclusive whisky that came about after Glenfarclas 15 Year Old picked up last year’s Whisky of the Year award: Glenfarclas 15 Year Old 103° Proof. Bottled at cask strength (58.6% abv/103° proof) it’s Glenfarclas 15 taken to another level: complex and intensely sherried, with some softer fruity notes to temper the onslaught. It went down well at the Whisky of the Year tasting, and is now available to purchase at The Whisky Exchange.

RT @WhiskyExchange: Up on the blog, our Spirit and Whisky of the Year 2014-15: @Glendronach 15 and @CocchiWinery Vermouth di Torino – http:…

RT @WhiskyExchange: Up on the blog, our Spirit and Whisky of the Year 2014-15: @Glendronach 15 and @CocchiWinery Vermouth di Torino – http:…

#Whisky Spirit and Whisky of the Year 2014-15: It’s strange how quickly something becomes a yearly tradition. … http://t.co/QPlIsi4b2C

@domu888 Spirit and Whisky of the Year 2014-15: It’s strange how quickly something becomes a yearly tradition…. http://t.co/dHCroK3ufn