Sherry casks part two: what is a sherry cask?

12 Comments on Sherry casks part two: what is a sherry cask?

[If you missed it, here’s part one: What was a sherry cask?]

These days, the vast majority of sherry casks used to mature Scotch whisky are specifically built for the whisky industry. They are still usually constructed in the same way as a traditional sherry cask, whether it was used to mature sherry in a solera or transport it around the world. However, not all casks are the same, and there are a number of choices made during their creation.

The first choice is the type of oak to be used. The usual division of oak types in the whisky world is into two camps: American and European. It’s a good simplification, but European oak is a complex mess of different types of wood. 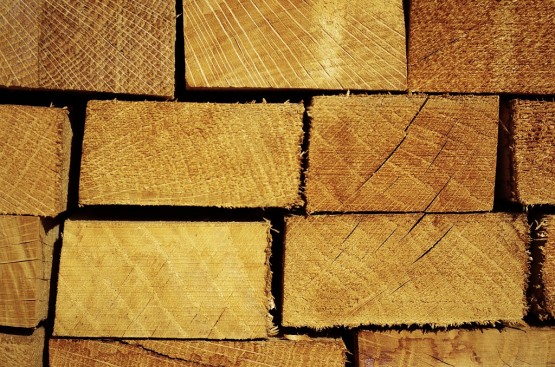 In general, the main difference between European and American oak is the grain. American oak has a very wide grain, which leads to it giving a lot of flavour, but focused on the sweeter vanilla/coconut/fresh fruit spectrum. European oak is much tighter grained, which gives darker and more spicy flavours, with bitter tannins, dried fruit and caramelised citrus notes.

While the USA isn’t a small place, the oak there is fairly consistent – nice straight trees with few knots that are perfect for making planks. European oak is quite different – very variable across the continent and famous for being quite gnarly, with lots of knots and inconsistencies. This not only means that each tree will be very different, but there’s also a lot more waste when making casks from European oak – about 40% of the total at the cooperage I recently visited. 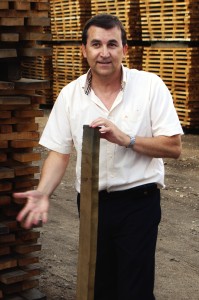 The cooperage in question is part of Bodegas José y Miguel Martin, a winemaker in Huelva to the north-west of Jerez, near the Portugese border and outside of the Sherry Triangle. They produce sherry-style wines, but also produce a large number of casks for use by the whisky industry – potentially as much as half of their production is connected to whisky production.

The cask-making process starts with seasoning the wood – allowing it to dry out so that it can be worked with. It arrives at the cooperage as planks, which are then stacked and left to rest for a time that can be months or years depending on the type of wood. Generally, European oak needs to season for less time than American, but the variation in the former is considerable.

From the hot and sunny summers of the southern Spanish coast to the cold and dry winters of Ukraine, the climate of Europe is far from consistent. While the USA has a similar variation, in Europe the influence is amplified in the oak that’s grown. The different oak types also appear in far-off places. ‘European oak is not a kind of oak,’ says Miguel Martin, ‘it is a blend that has happened over the years.’ Due to wonders of wild pollenation and deliberate farming, you’ll occasionally find a more Russian style of oak popping up in your forest of French oak, and every tree has to be handled on its own merits. While Spanish oak casks are traditionally good at providing flavour to spirits, others may not work as well – ‘Ukrainian oak is like concrete,’ says Miguel, great for storage, less good for maturing whisky.

Once you have seasoned your oak, it needs to be turned into staves, the lengths of wood that make up the cask. The planks are cut to size and inspected, and staves with too many knots or inconsistencies are discarded. The staves are flat and straight at this point, quite unlike the curved pieces required to build a cask, and the next stage of the process transforms them. 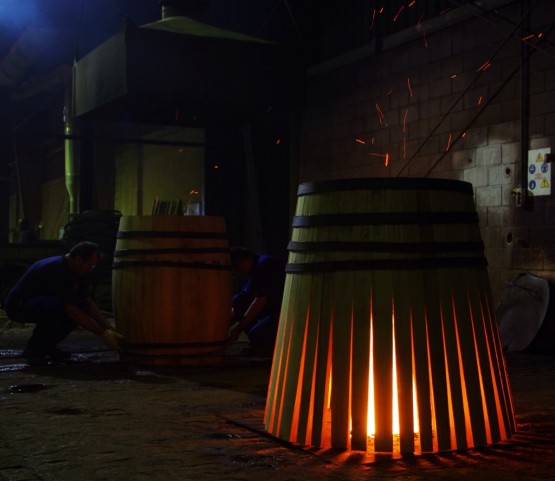 Firstly, the cooper forms a tent-like ‘almost-cask’, with the staves held together by metal bands. The cask is then positioned over a flame pit, fuelled by the rejected staves, and toasted. From time to time, water is thrown around inside the cask to create steam and soften the wood. A pair of cables are attached around the base of the cask and when the wood is soft enough, winches are turned on, tightening the loop of cable, drawing the staves together, and bending them into the correct shape. More metal bands are hammered on, heads are fitted, and the cask is left to rest before being used.

How are they used? Find out in our next post…

#Whisky Sherry casks part two: what is a sherry cask?: [If you missed it, here’s part one: What was a sherry c… http://t.co/mK5rl8GXa7

Part two of my series about sherry casks over on the @WhiskyExchange blog – http://t.co/tpkutTBP2m

[…] Here are the previous instalments if you’d like to catch up – What was a sherry cask, What is a sherry cask and What goes into a sherry […]