[This time we hand you over to Enrico, our shop’s Japanese whisky expert and resident Italian. He really likes whisky from Arran…]

We decided to host this tasting to celebrate the 18th Anniversary of the Isle of Arran distillery, a week after the Arran Music Festival that they hosted. Here at the Whisky Exchange Vinopolis we had the great pleasure to have Louisa Young, Global Ambassador for Arran, bringing us some long awaited new limited releases and the stories behind them. 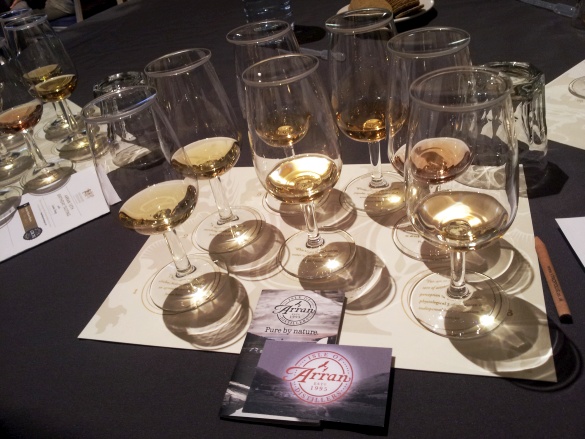 The distillery, which was built in 1995 with the its first distillation running in July, is the island’s first legal distillery for over 150 years, after the last one closed in 1836. It is the brain-child of Harold Currie, who offered subscribers the chance to invest in the distillery and guaranteeed a return on the whisky from 1998 – a lot of the casks that were sold to investors to finance the production are still under private ownership. Sadly, just before the 10th anniversary the distillery had two years with no production.

In the 19th century there were more than 50 illicit stills on Arran. Whisky produced illegally had an important role in the life of farmers, as spirit made from surplus grain became a currency in itself. These stills were generally located far away from the prying eyes of the Tax Man but always close to a good water source.

This was the case for Loch Na Davie, the water source chosen for the Arran Distillery in the north of the Island, near Lochranza, but these days the distillers don’t need to keep an eye out for Robert Burns, who served as an Excise Inspector in Dumfries in the eighteenth century. The famous poet, who lived from 1759 to 1796, used to get around Scotland by horse, travelling many miles each week. He would ride for four days of the week collecting excise revenue, and write poems for the remaining three days.

This is where the name for the official Robert Burns single malt from Arran comes from, a mix of 70% ex-bourbon barrels and 30% ex-sherry hogsheads – it is interesting to see the distillery using hogsheads instead of the larger sherry butts. It is a delicate whisky with a light pale yellow colour, hints of citrus and fresh barley as a start, developing with more sweetness and creaminess.

In 2007 James Mac Taggart become the Arran Distillery Manager and they started to put more whisky into bourbon casks rather than ex-sherry hogshead. This gives more freshness and creaminess, which in my opinion will improve the taste of the whisky even further!

The distillery is a tiny one. Five people work there, producing 400,000 litres of alcohol per year, a quantity which has increased over the last two years. They mainly use three different types of barley: Optic, Concerto and Oxbridge, although in 2004 they used some Orkney Bere Barley, producing a whisky of the same name that was released last year. They’ve recently added a new warehouse next to the two already existing ones, giving a total capacity of 12000 casks. Plans for expansion are in full swing at the distillery – Louisa told us about the great market for their whisky in the USA, France and Japan, and we are looking forward to see how far the Arran malt will go.

We then tasted our way through the whiskies that Louisa brought:

Arran 10yo – 100% ex-sherry Hogshead with a golden barley colour.

Palate: Round with rich fruit, good sherry notes, and a touch of spice and citrus.

Finish: Light cocoa to start with, followed by delicate freshness and sweetness.

Nose: Pannacotta and spices with a hint of liquorice.

Nose: initially quite spirity followed by some red fruit and cherry stones.

Taste: lots of light strawberry jam, hints of spice and a delicate touch of wine.

Finish: thick and peppery at the start, sweet cranberry candies, wine and juicy.

Machrie Moor, which takes its name from the mystical peat bog on the west coast – barren terrain with bronze age standing stones. It is a first fill bourbon cask matured whisky using a mix of peated and unpeated malt, for a final 20ppm phenol level.

Nose: Agave, vegetal and gentle smoke that remind me a lot of mezcal.

Finish: More creamy and quite short.

This is the second release in a predicted trilogy. It’s a mix of ex-sherry, ex-bourbon and peated whiskies from 2004 that were hand selected to create a great whisky. It surprised me quite a lot with its diversity of flavour.

Palate: Little sweetness to start with some tropical fruit, butterscotch and some spices.

Finish: A bit dry and spicy on the edges, very delicate peat, vanilla and some liquorice.

The stand-outs for me were the 12yo cask strength,  a really gentle dram which showed the best of the sherry cask, and the (unfortunately sold out) Devil’s Punch Bowl II.

A fantastic tasting, many thanks to Louisa for entertaining us and making us all fall in love with the Arran malt!

#Whisky Isle of Arran 18th Birthday Tasting: [This time we hand you over to Enrico, the obscure Japanese whisk… http://t.co/4dx9l6UnLD

RT @DinoSpeaks: #Whisky Isle of Arran 18th Birthday Tasting: [This time we hand you over to Enrico, the obscure Japanese whisk… http://t.…