Home   WHISKY & WHISKEY   What's in a Nose? An Exploration of the Olfactory Epithelium

At the excellent Auchentoshan Taste Experiments show I went to a week or two ago, I had a minor revelation during Rachel Barrie’s chat about how chemistry affects the DNA of whisky. It occurred when I thought I overheard someone saying “But isn’t that all bollocks?” when Rachel explained that everyone’s sense of smell and taste is subjective because of minute differences in our olfactory epithelia – the layers of tissue in our noses that detect odour. 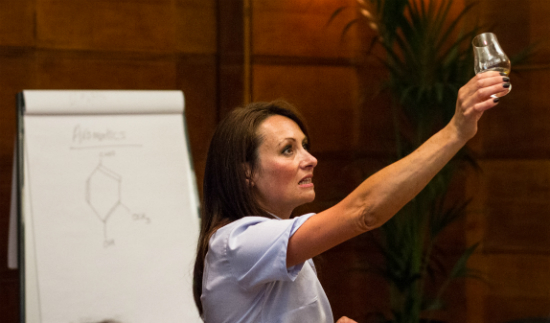 Rachel takes no chances with her own extremely valuable olfactory system

In short, I realised that sometimes it’s not enough to know a thing to be true without properly understanding why. In the case of our sense of smell – olfaction – I suddenly felt the need for people to understand that there really is an objective physical basis for the old cliché that tasting is subjective to each individual and therefore we all get different aromas and flavours when we nose and taste a whisky.

First things first: of course our individual sensory perception is, by definition, subjective. I don’t know if you are smelling exactly what I smell when I talk about Christmas cake, in the same way that I don’t know if you and I experience the colour blue in the same way. But while we have to accept that first principle of subjectivity, it’s also important to grasp that the differences we all encounter in our experiences of aroma and flavour detection are also down to genetic variance in the physical makeup of our scent-detecting olfactory systems.

The olfactory epithelium is a layer of tissue at the top of our nasal cavities that is home to around 40-50 million hyper-sensitive receptor neurons.  These neurons receive or intercept odour molecules (depending on how interesting you want to make it sound) and transmit signals to an olfactory bulb of nerves at the front of your brain, which decodes the signals and sends them along the olfactory tract deep into the cortex of your brain, which then interprets them as smells.

It is believed that the olfactory bulb’s connection to the limbic system, which is an evolutionarily very primitive part of the brain associated with emotion, may explain why smell is the most primal sense, capable of triggering powerful spontaneous emotional responses: the Proustian phenomenon (now scientifically proven) where a specific odour can provoke a flood of memories from the individual’s past, often in enormous detail and with greater emotional resonance than that induced by other memory cues.

The subjectivity of our own individual experience of aromas and flavours in spirits is not bollocks, it’s a biological fact, like, well, bollocks.  And with the nasal receptors responsible for around 80% of our experience of flavour, and everyone having 40-50 million receptors each, there’s no wonder that no two people’s sense of smell is the same. It would be impossible for two grown adult humans to have exactly the same olfactory epithelium in the same way that it’s impossible for two of us to have identical fingerprints.

In fact, even if two people did have identical olfactory epithelia, they would interpret the signals they received differently because they have different brains. The natural genetic variety and divergence inherent in the olfactory system also explains why some people have such a strong reaction to certain flavours and others can’t detect the same flavour at all, or can detect it but have a neutral reaction to it.

I felt great relief when I first properly grasped this concept. I can still vividly recall the terror I felt as a rookie taster during my early Oddbins staff tastings when my colleagues were confidently declaiming how much kumquat a cheeky little Languedoc Marsanne / Viognier was displaying.  Nothing can quite describe the panicky anxiety of sitting amongst your peers and being unable to pick up on something everyone else is going into raptures about. 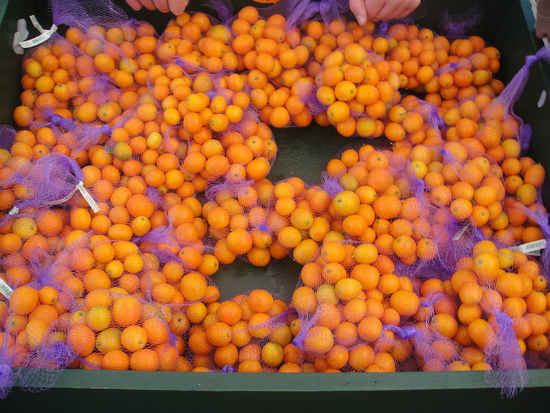 As an aside, I’m certain that helping newbies to conquer this fear is crucial for whisky companies in their never-ending quest for the Holy Grail of luring cool, new 18-30s into the single malt category.  The simple way to do it is by demystifying the olfactory epithelium. Make them proud of it!

I used to suspect that the whole subjectivity thing was, at least in part, a comforting white lie to prevent people who were just getting into wine / whisky from getting discouraged.  The fact that everyone’s sense of smell is different always seemed to be, on one hand, an obvious objective truth, but also, in some cases, a throwaway line – a bit of a convenient cop-out.

For a long time when I heard someone talk about subjectivity, part of me (the cynical part) did wonder if it was just a polite way of saying that everyone’s nosing and tasting ability were different.  For years I gave far too much weight to the idea that aroma sensitivity is just a matter of training one’s nose, and suspected that my manifold nosing and tasting failures were down to an incomplete sensory vocabulary. In fact, while it’s certainly true that a nose can be trained, no amount of training will help you smell something you don’t have a receptor for. In many cases it’s a simple matter of genetics.

Nowadays, I think that subjectivity should never just be trotted out as a blasé disclaimer.  The olfactory system should be properly explained and celebrated, for it really is a miraculous thing.

The olfactory epithelium’s 40 million-ish receptors enable the human schnozzle to detect and distinguish up to 10,000 different smells, even in very minute concentrations. As an example of our own capability, think of how smoky a Laphroaig smells in the glass.  Now consider that, after distillation and ageing, the actual phenolic content of the spirit is maybe only 10-15 parts per million.  In other words, at a phenolicity (I may have just made up that word) of around  1:100,000, we humans still perceive Laphroaig as extremely smoky. 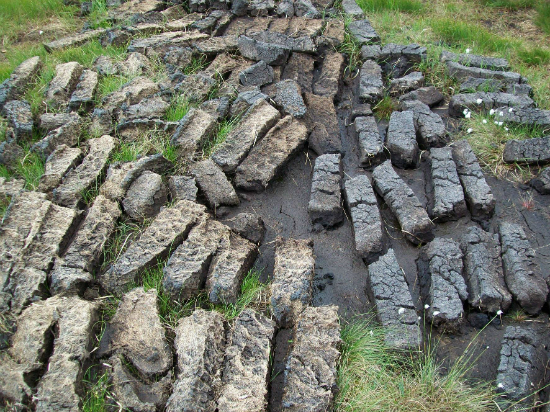 A large quantity of potential phenolicity at Laphroaig

Of course, human olfactory systems are much less sensitive than most other vertebrate animals.  The classic comparison is with dogs, whose olfactory epithelia are nearly twenty times larger than ours and hundreds of times more densely populated with receptor neurons.

In fact, while your common-or-garden mutt may have a sense of smell only a hundred thousand times better than yours, bloodhounds, who are the most nasally-gifted of all the canines, may be able to detect odours up to one hundred million times better than you.  Another of the many very good reasons not to let your bloodhound drink Laphroaig.

One thing I used to wonder about was how dogs could actually go anywhere without their tiny brains exploding due to the sensory apocalypse that must assail their olfactory systems from all directions at every moment of the day.  Of course, the rather mundane answer is that the dogs’ sense of smell is completely normal to them and therefore not something they spend a great deal of time worrying about.

In practical terms, the big difference between a dog’s remarkable nasal sensitivity and our own is that a dog is able to detect specific aromas in concentrations tens or hundreds of millions of times smaller than we can. 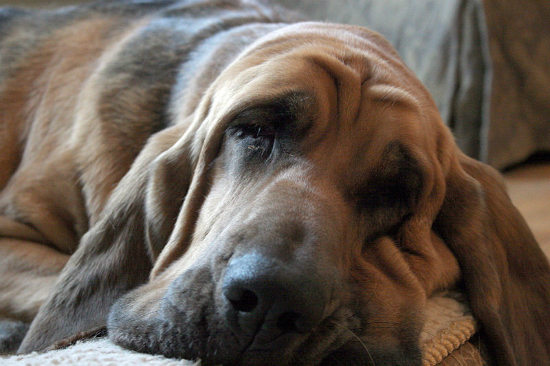 A bloodhound not worrying about its incredible olfactory capacity. Pic from Wiki Commons

Here’s an example: If we can detect 10 parts per million phenolicity (if I keep using it, it might become real) in Laphroaig and a bloodhound’s sense of smell is a hundred million times better than ours, then if you were to pour a 25ml shot of your bloodhound’s Laphroaig into an Olympic size swimming pool (2.5 million litres), that pool would smell as obviously smoky to your bloodhound as a shot of Laphroaig does to us (assuming I’ve done my sums right).

Of course, explaining all this to your bloodhound afterwards won’t make him feel any less aggrieved about you wasting his Laphroaig, so make sure you’re wearing your very thickest ankle socks before performing this experiment. [Disclaimer: Do not perform this experiment.]

Next time you hear someone saying  ‘Oh, don’t worry if you can’t find the kumquat – everyone’s sense of smell is subjective’, please remember that this is actually a true statement – even if the person who says it doesn’t really understand why.

#Whisky What’s in a Nose? An Exploration of the Olfactory Epithelium: At the excellent Auchentoshan Taste Expe… http://t.co/L64u02b2ZF

Wonderfully erudite and refreshingly well-written post by @TimFFS on the untamed variability of our noses http://t.co/djW3S4Lmrc

RT @SJWanchope: Wonderfully erudite and refreshingly well-written post by @TimFFS on the untamed variability of our noses http://t.co/djW3S…

What’s in a Nose? An Exploration of the Olfactory Epithelium <@TWEBlog> http://t.co/HxjhzCQDy6 < #whisky

What’s in a Nose? An Exploration of the Olfactory Epithelium http://t.co/58mqK5t7tn via @sharethis

excellent article about the science of smell in regards to nosing whiskey. http://t.co/eIqOBzwRsM

What’s in a Nose? An Exploration of the Olfactory Epithelium http://t.co/xuOk1Z1F5L via @sharethis

Hi Tim, Lovely blog this one. Regarding your maths, I think British and American trillions might differ in scale. Or maybe not….Someone will know.

Thanks, Dad. I had a look and the UK has been using the short scale (same as USA) since 1974, so our billion is a thousand million and a million million is a trillion. This means that for us a hundred thousand times a hundred million is ten trillion. More here: http://en.wikipedia.org/wiki/Long_and_short_scales

Sorry to burst your bubble, but it appears that you’re the third person to write the world “phenolicity.” The first is here:
http://beeradvocate.com/beer/profile/684/3579/?sort=topr&start=0

And the first printed appearance is here:
http://www.sciencedomain.org/abstract.php?iid=73&id=3&aid=244#.UgpDUpLhWSo

beyond that, you wrote quite a nice article. Thanks.