TWE Blog is proud to welcome the legendary Duncan Ross from TWE Vinopolis as a guest writer on the blog, with his first post being the following report on our recent charity Japanese whisky tasting:

The events that occurred in Japan in March this year had repercussions that were felt around the world and the pictures that we saw made a great impression upon all of us at TWE.  We felt that something should be done to assist those who had suffered so we decided to stage our first charity tasting evening with a range of Suntory’s Japanese whiskies in aid of the Japanese Earthquake and Tsunami Appeal.

The event was hosted by the legendary Dr. Koichi Inatomi, who had started with Suntory in 1959 up until his ‘retirement’ in 2000.  Dr. Inatomi’s credentials included time as a Laboratory Chemist, Malt Manager, Distillery Manager, Warehouse Manager and  Chief Blender and he still has an appetite for learning today, being a Director in Research and Development in Glasgow.

The crowd were treated firstly to a brief history of Suntory, which as a company is just over 110 years old, with the renowned Doctor showing pictures of the early Yamazaki Distillery founded in 1923 and the later Hakushu Distillery founded in 1973; the use of a selection of barrels and, surprisingly (to me anyway), the use of a lot of foreign malt for their whisky production (both peated and unpeated.)

Dr Inatomi was quite clear that in the early days of production (1929 – Suntory White Label) sales of whisky were low due to whisky not being a typical civilian drink: it was more familiar to the armed forces than the general populace, so it took many more years (1937 – Kakubin) before being accepted into the mainstream.

One thing that is apparent with both of Suntory’s distilleries is their fabulous locations, among cherry blossom and fir forests; and also their tradition of shrines and temples bringing good luck and prosperity – this adds a rural magic to these stunning buildings. 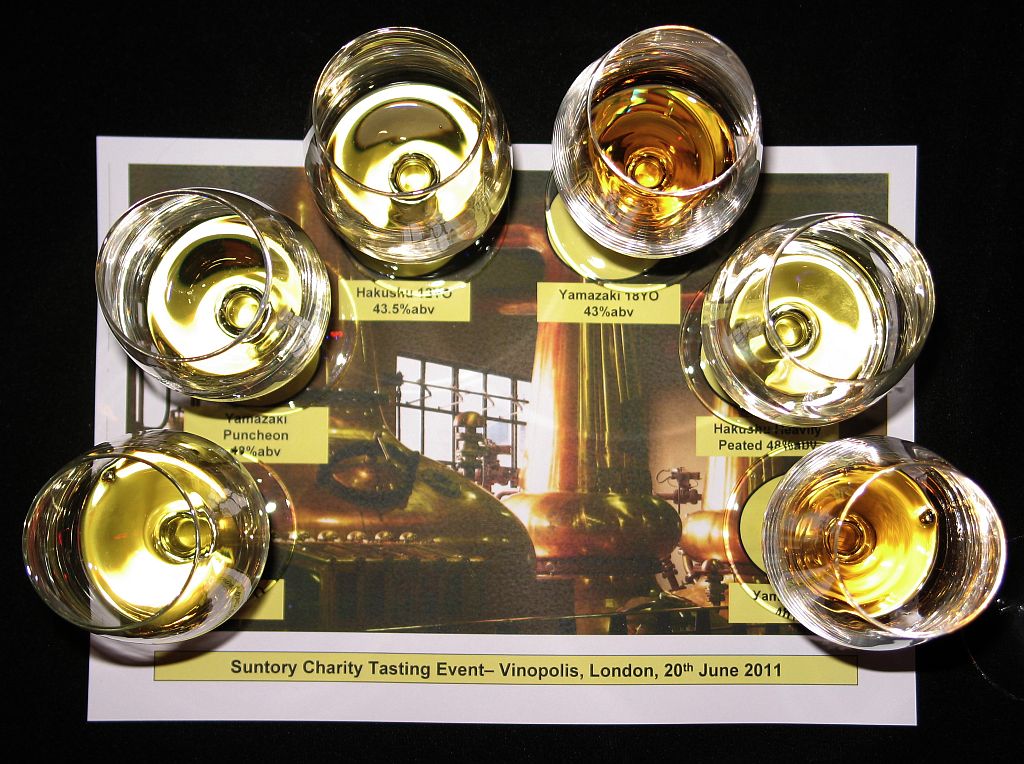 After the history, it was to renewed anticipation in the room that Dr Inatomi suggested that we introduce ourselves to the first of the evening’s whiskies, the Yamazaki 12yo 43%: this was Suntory’s first Gold Medal winning malt, so a good one to start with.

The light gold colour conveyed the clarity of the malt and with clean, creamy zesty notes on the nose and a fresh candied vanilla hint in the background, this was a lovely way to commence.  The mouthfeel was soft and lightly oily with apples and spiced cedar coming through with a good sweet vanilla oakiness appearing at the end of the palate.  The finish was lingering, fruity and silky with mellow oak hints balancing out this lovely dram. 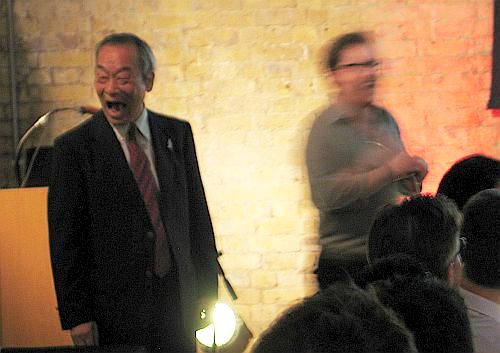 Alex makes a break for it as Dr Inatomi gets shouty

After further information from Dr. Inatomi on Suntory’s wood policy (mostly American White Oak, some seasoned Spanish Oak and a small amount of Japanese Oak), we approached the Yamazaki Puncheon 48%, a non-chillfiltered whisky that was in excess of 10 years old: the lemony colour was not matched by any citrus notes on the nose, though it had a nose-tingling spiciness and warm cereal notes and an almost apple spongecake tang to it as well.  The softness of the whisky on the palate showed a dryness and a soft stone fruitiness that turned to a sweet spicy lingering finish which left a lovely warming mouthfeel for a good few minutes.

With the speed of a Shinkansen bullet train we were then on to the Hakushu 12yo 43.5%. With its clean golden appearance, this aromatic, heavy malt blossomed with poached pears and smoke!!  Smoked oak chips danced on the tastebuds but did not at all overwhelm the palate, a complexity of fruits lasting for a good few minutes while the smoke and oak battled it out in what is a very balanced single malt.  This whisky has played second fiddle to the more established Yamazaki but as a malt the 12yo is a great introduction for those that like a hint of peat.

When you see the Yamazaki 18yo 43%, you know your tastebuds are in for a treat: this dark copper coloured malt oozes sophistication.  The nose is burnished mahogany, dark chocolate and dark forest fruits; the depth is ……..deep.  Your palate prepares for the rich fruitiness that it is expecting – thankfully the Yamazaki really does deliver, with loads of rich, dark chocolate, Dundee fruitcake, all-spice.  This is a gutsy whisky, as you would expect; the finish is long, spicy and fruity.  A magnificent malt.

After the initial surprise of the 12yo Hakushu and the reassuring majesty of the Yamazaki 18, we were then transported to the slightly unusual beast that is the Hakushu Heavily Peated 48%.  This no-age-statement malt contains whisky between 10 and 15 years and the malt they use is peated to 25ppm – pretty tame compared to the likes of Octomore and Supernova, but respectable nonetheless, similar to Lagavulin.

This American oak-matured malt has a light golden colour and clarity and its nose is somewhat delicate version compared to its Islay cousins.  There is seaweed and barbecue smoke, but at a much more delicate intensity.  The soft, oily mouthfeel has memories of Laphroaig but does not overwhelm the palate – and of course we cannot forget the smoky bacon that permeates through the entire experience.  The finish is long, lingering and has subtle complexities that mean you need to visit it a few more times before you get an overall opinion. 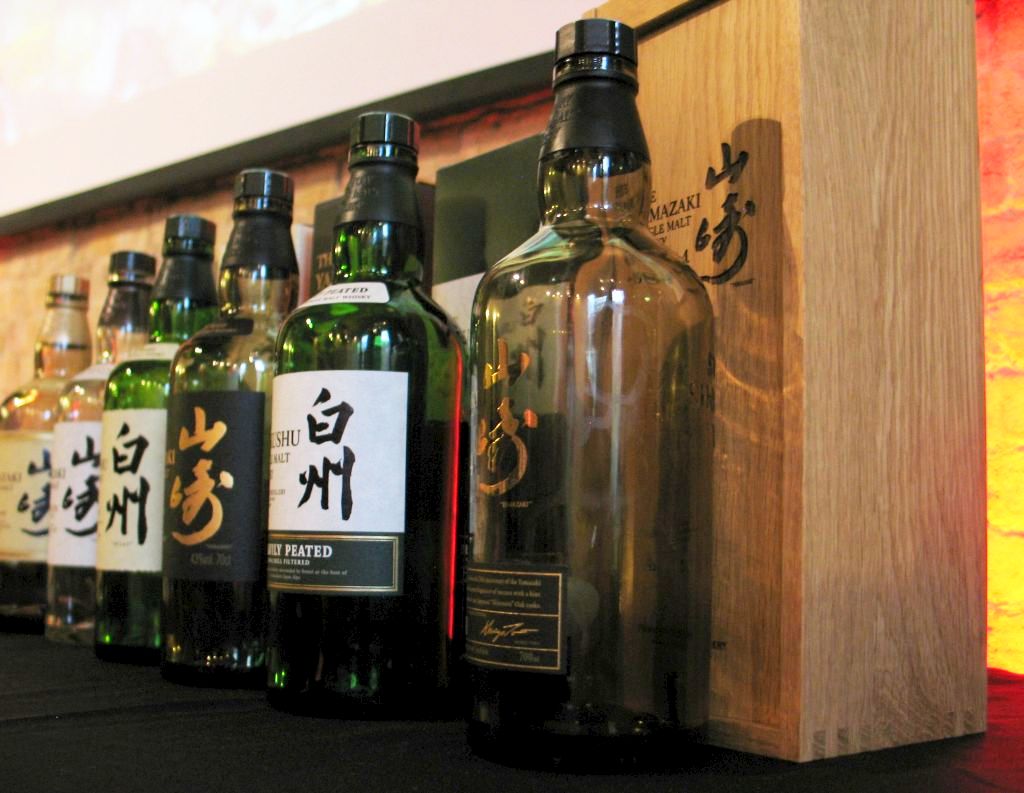 A rather impressive line-up

With most of our evenings we always end up with something great, so let’s not change that.  The Yamazaki 1984 48%, a combination of 70% Japanese Oak and 30% American Oak, and aged for 25 years, was no weakling.  This chestnut brown malt had the appearance of the 18yo but the nose reeked of polished oak, those extra-matured raisins, dark plums and damsons adding a rich dark fruitiness.  The richness and mature dryness covered the tongue with grandma’s old Christmas cake, lots of dark fruit, unctuous oak and an elegance that showed its maturity (As you would expect with a whisky retailing at over £500).

Dr Inatomi decided to have a show of hands for the whiskies that we had tried and it was to no-one’s surprise that the Yamazaki 1984 panned an impressive approval with the Hakushu Heavily Peated coming in a close second.

Just when you thought things were coming to a close we came to the auction with a chance to raise even more money for the appeal.  Dr Inatomi had generously donated two special bottles for the event which were to be sold as a package: a Cask of Yamazaki Peated 62% and a Cask of Hakushu Sherried.

Alex was the master of ceremonies and started the bidding at £100 (both bottles were initially priced at around £100), this quickly jumped up to £200, £300 etc.  With a bit of showboating we thought they had sold for £400, but a last-second bid kept the game afloat until we reached an amazing £600 when both bottles were sold to an anonymous Indian gentleman of some reputation (????).

Duncan slacking at the end of the bar (He doesn't get to write the image captions...)

This was the icing on the cake and after a 12yo Hibiki highball to relax at the end of the evening we bid adieu to Dr Inatomi, feeling that we had done quite well both for the charity while meeting and learning from one of whisky’s greats.  In total, the evening raised well over £3000 for the Japanese Earthquake and Tsunami Appeal, so a massive Thank You to Dr. Inatomi, Suntory and everyone who attended the tasting.

The fun wasn’t quite over yet, though – the last event of the evening was a prize draw to see which of the lucky attendees was the winner of a bottle of the magnificent Hibiki 30 year old! Well done to Duncan (not me!) for winning the raffle and a very nice bottle for his wedding.

Many thanks to Duncan Ross for this excellent write-up of a fantastic event.