Yes, it’s a pre-release sample of Kilchoman 3yo, as dropped in by none other than Anthony Wills himself at a meeting with Sukhinder earlier this week. 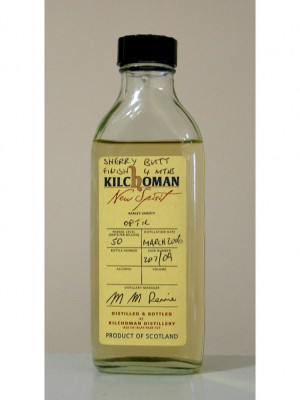 How exciting! Kilchoman 3yo

For those who can’t read the details on the photo, the handwriting on the label says:

Cask 207/09 (I’m afraid I’m not sure if this means one cask or two)
Distilled March 2006
50ppm
4 months sherry butt finish
Barley variety is Optic
Strength: No idea yet.

Now, for the sake of clarity I should point out that I’m fairly sure that this is a representative cask from the forthcoming release, rather than an exact sample of what will be bottled, as it has a cask number and I understand the planned release is going to be a few thousand bottles.  I don’t know what the retail price of this will be yet, but I’m guessing it’ll be less than the £5400 that was raised at auction for the first bottle. 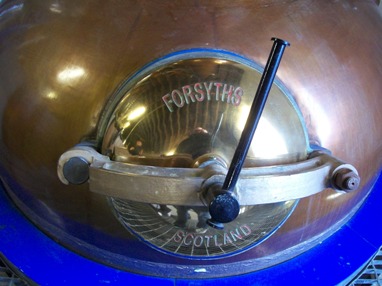 The spirit still at Kilchoman

Nose:  Soot, lemon, flax and the faintest hints of sherried sweetness.  Some faint shortbread.  The phenols are more on the smoky rather than peaty side.  With time, becomes mildly leafy and herbaceous, then bonfire-esque.

Palate:  Well, it’s not 40%, that’s for sure!  Big alcohol burn on the tongue, then a roar of pure bonfire, with a few hundredweight of cracked pepper and hot chillis.  Mama!  Like licking burnt wood while it’s still burning – and I mean that in the best way.  Distinctly Talisker-esque (and you can’t pay anything a much higher compliment than that) but at a robust strength and with a double-dose of ppm.  Cacophanous – it almost literally fizzes across the tastebuds.   After a couple of sips (and it is very more-ish to a peat masochist such as myself) one’s tongue is anaesthetised, but the flavours still come barrelling through.  Really not totally dissimilar to Ardbeg Supernova.  I’ll have to taste them side-by-side at some stage.

Finish:  Big.  Pretty hot.  Inordinately peppery.  Much lengthier than expected, but some of that is obviously down to the alcohol.

Comment:  If the general release is anything like this, the peat-freaks are going to go berserk about this stuff.   I mean, seriously bananas.  Non-peatophiles (careful!) will probably hate it, but it’s not aimed at them.  The organoleptic equivalent of Daffy Duck crashing the cymbals around your ears. 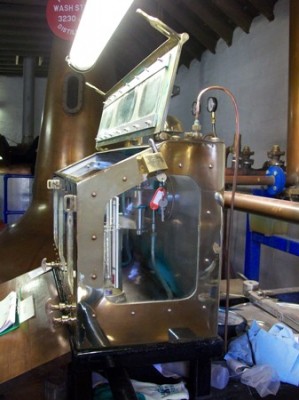 The spirit safe at Kilchoman

N:  Okay, all the elements as before, but less aggressive, and with some new elements – wet newspaper, wet leaves, wet earth, wet dog.

P:  A sweeter note has crept in, presumably from the sherry (although any influence those four months have had is fairly minimal).  The spices and pepper are still pretty fierce, but more manageable.

F:  Still pretty epic.  And I was generous with the water.  This is an immense dram.

C:  For those of you that, like me, enjoy the full-on rush of endorphins one gets from very spicy food or a very big smoky whisky, Kilchoman is going to be a must-have.  Those who prefer their whisky soft and smooth should start running now.

can it be called whiskey? it’s only 3 year old.
so young…

Looking very much forward to it.

[…] Whisky Exchange gets a sneak-taste of the Kilchoman 3 year old. […]

Gal, to be called whisky the spirit must have been aged for a minimum of three years and one day. As this was distilled in March 2006, it IS whisky – just!

kilchoman sound a brillent whisky love to tast or buy one

Well it looks like some kind of grain or perhaps barley made whisky….. Lol – its a guess, but lets here it from the experts.

Had my first at the Brook House Hotel Eskdale, Cumbria, 28/07/10. This is seriously a WOW! dram; it lasted a good half hour and the flavours just kept coming. This will be a classic.