Holiday: n: ‘A day free from work that one may spend at leisure, especially a day on which custom or the law dictates a halting of general business activity to commemorate or celebrate a particular event’

7.30am: Joel’s alarm rings throughout the lodge, signalling the start of Day 9.  Or Saturday as it is known to most folk. Back on the mainland our whisky WAGs and friends were still snoozing, ready to awake to a sun-filled day of BBQ’s and FA Cup Finals (both the original and the Scottish versions).  We, however, are greedily stuffing boiled eggs, Coco Pops, Sugar Puffs and toast down our cake-holes as a full day’s work awaits our eager hands. 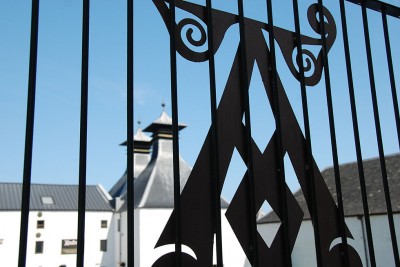 After a beautiful morning drive through Port Ellen, we arrived at Ardbeg with keen smiles and full bellies, ready for our orders from Jackie.  After donning our box-fresh Ardbeg polo shirts (Neil managing to find an olive green number to match his tweed), we were divided into 2 groups: Joel and Tim were to man the outside bar while Neil and Darrell were enlisted to be the official snappers for the day.  This was a tough job that involved wandering around in the bright sunshine, taking pictures of smiling Ardbeg enthusiasts, printing them off and putting them on display for all to see. How they didn’t run out of paper I will never know! 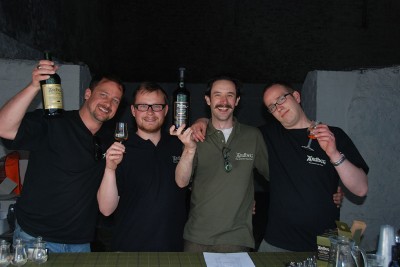 Unfortunately my neck brace had been removed a bit early

The day flew by, switching between picture taking, dram pouring and shelf stocking.  If asked, we’d oblige.  Soon it was time for a well deserved lunch break; Ardbeg had the wisdom to serve packed lunches (and we mean packed: a roll, McCoys, a chocolate bar, a (soft!) drink and one of your five-a-day). All that was missing was a miniature of Ardbeg 10 year old! So we grabbed ours and headed up to the Highland Games to see folk tossing sheep (don’t google images that!), throwing bags of bungs over a high jump and trying their hand at strongman stone lifting.  Later in the day, several teams competed to lift the much-sought-after Tug-of-War trophy, only for it to be retained by the Ardbeg workers themselves, with a (little) help from ‘Big Barry’. 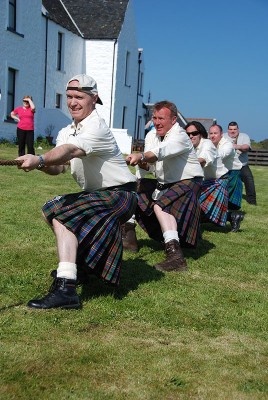 After lunch we took the chance to attend our only booked event for the day: the Ardbeg Twisted Tasting, held in the old Malting rooms.  On entering, we were presented with a menu containing 16 (yes, SIXTEEN!) different Ardbegs.  The 40 attendees then ticked the box next to the 6 drams they would like to try and, as is Ardbeg and Islay tradition, it went to committee! The 6 most popular were chosen and drams poured.  The Ardbegs that missed out were: 10, Uigeadail, Nam Beist, Still Young, Renaissance, Blasda, Corryvreckan, Supernova, Cask 1190 and MOR. This left Lord of the Isles, Cask 1189, 1975 cask 1375 and 1378.  Plus a very exciting dram entitled “Warehouseman’s Special”: 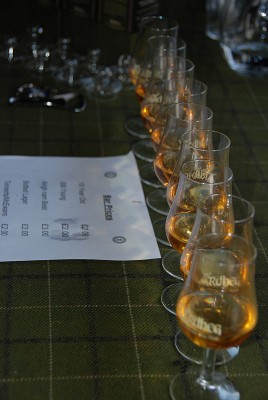 O. Another sensational dram fresh from the warehouse.

After our long lunch and six drams it was back to work. Being from good music business stock, this didn’t phase Joel and Neil in the slightest, while I already get paid for that sort of thing.  Not a problem, we were exactly as professional as before (boom-boom). 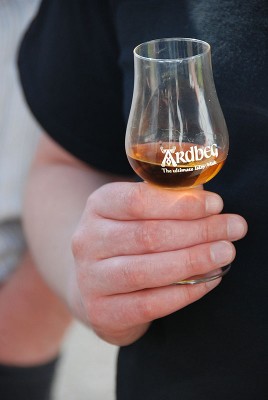 Back to work, you say? No worries

The afternoon continued apace and as the sun began its descent into the sea, we called time on the bar and the photos, to retire for a BBQ with the hard-working staff of Ardbeg. From manager to volunteer, every effort was given to ensure a good day was had by all.

As the evening drifted off into darkening sky, many islanders headed to the Final Fling. But for the bloggers, Sunday morning was seen in with a brief walk along the coast at our lodgings, sitting with a dram in hand and listening to the Islay waves crashing on the rocks for the last time, dreaming of our next trip back. 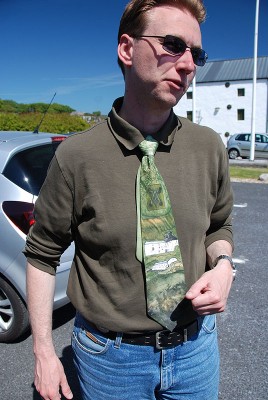 Ardbeg Tie Guy - what a legend

Well, Hope you guys would enjoyed a lot in the festival. The pictures provided are been really very good. Anyhow, Thanks a lot for the post.

Hi, I was part of one of the teams beaten by the Ardbeg Volunteers!

Found this blog while looking for a photo of the winning team to show my workmates. Now off to read the rest of the blog.

Given half a chance I’ll be there again next year, but my cohorts would like to go to Speyside instead. We shall see.

I enjoyed your blog re the 2009 Feis Ile.
I’ve been to Islay on holiday now three times usually in late April early May and usually visit all the distilleries. This year we’re going for the festival and are staying in Port Askaig for three weeks that is a full week either side of the festival.
I’m just wondering how you can keep up the stamina in the festival week.
But I found your Blog most interesting so I will read through it a few times more and lok for the goog tips.
As a bit of a Malt drinker I too see the bottle collectors as a bit of a funny group but I think that some og the big short term gains have gone now just look as Ardbeg Rollercoaster where there are many on E-bay already but as yet few sales.
It usually costs be a few pounds at Islay but I’m not sure just how many bottles I will be bringing back this year. Is there likely to be a special Port Askaig bottling this Year ??
May even see you at one of the Distilleries