A bunch of prize tossers

It was another early start on Friday as we had a lot of ground to cover.  First up was a 9.30am tasting at Islay’s newest distillery, Kilchoman, where we were shown around by deputy manager Gavin Douglas who was filling in at short notice for Jim Swan who had been injured in an accident at home – our best wishes and hopes for a speedy recovery. 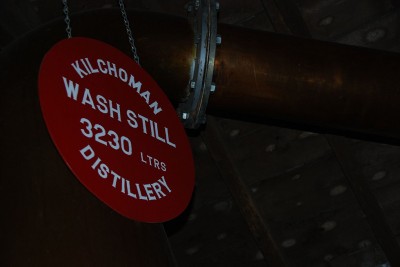 We hadn’t realised just how small Kilchoman was – it really is tiny.  Small but perfectly-formed, I suppose.  Gavin told us that the small stills produce only enough 45ppm spirit to fill three casks per day (a mix of fresh and refill bourbon plus some fresh sherry, although we also saw some French wine casks in the warehouse).

The warehouse was, like the rest of the distillery, small and full to bursting with barrels. The spirit we tasted was mostly 3yo from different cask types, and we all agreed that it had the potential to become seriously good whisky when it gets a bit older. 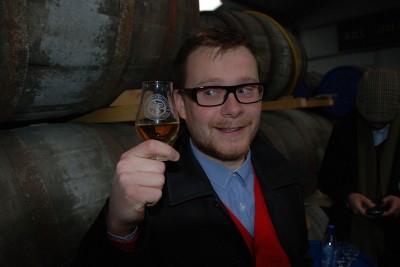 Joel getting up close and personal with his Kilchoman

P:  Honey and smoke.  Pretty peppery.  A nice combination of sweetness and soot.

With the tasting finished, we motored over to Bruichladdich to say a quick hello to our friend Jo in the warehouse.  We only popped in for a minute as we were running late for a lunchtime tasting at Bunnahabhain, but we still managed to fit in a bit of an exclusive:  full-term sherried Octomore! 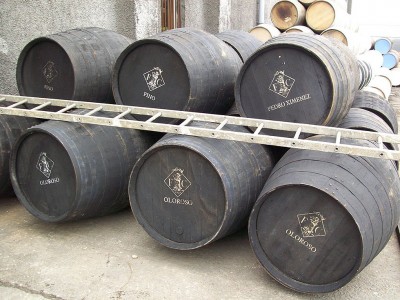 N:  Honey and tweed, rather pleasant.  A little closed, though what’s there is pretty promising.

P:  Boom!  Massively phenolic as expected and, unlike the other two Octomores we’ve tried, some balancing sweetness in the form of honeycomb – real Crunchie bar character.  The coalsmoke and burnt wood win through, but this has real potential.

F:  Hot and smoky like a roaring coal fire, but with a thread of honey that really adds to the fun.  This is definitely the most interesting Octomore we’ve tried so far.

Having said our thank-yous to Jo, we jumped back into our trusty Focus and roared down to Bunnahabhain, arriving in the nick of time for our blending masterclass, which was run by blender Kirsty McCallum from Burn Stewart.  This was great fun, with the tables festooned with measuring cylinders and plastic beakers as well as the expected tasting glasses (Glencairn must do bloody well out of this festival, by the way).

In the event, just as with the Nosing contest a few days before, we were rubbish and didn’t win, although Faceman got pretty close.  However, the best was yet to come.  It transpired that Ian Millar, master distiller and Global Brand Ambassador for Glenfiddich, was sitting at our table with some whisky mates from Dufftown.

At the end of the competition, Ian calmly plonked an incredibly old and rare Bunnahabhain on the table and announced that he’d been given it a while ago and that this seemed like a good time for it to be drunk!  The room was taken aback by this very generous gesture, but recovered quickly and got stuck into what turned out to be one of the best malts we tried in the whole week. 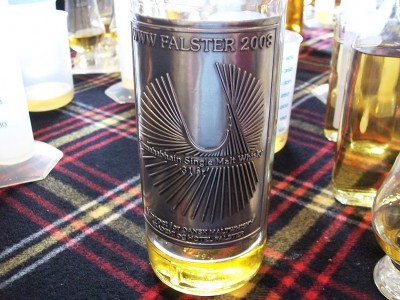 Very special, heartfelt thanks to Ian Millar of Glenfiddich for an absolutely wonderful dram.  This was up there with the 1968 Auld Aquaintance as the best Bunna I’ve ever tried.

We were pretty hungry after all this dramming and it was still only 2pm, so on exiting the tasting we joined the queue for a burger.  There were probably 20 people ahead of us.  Forty-five minutes later there were still five or so people ahead of us.  After an hour we were at the front and pretty cross.  It seemed that the people running the BBQ had been unable to grasp that the burgers weren’t cooking because of a lack of fuel.  We watched as burgers that had been on the grill for ten minutes were turned over still raw and decided to sack it off.

Thankfully, the vegetarian Faceman had been in the queue for the spectacular scallops (actually he’d been through the queue twice in the time we were waiting for a burger) and was able to contribute a few delicious morsels.  Disconsolate and still pretty hungry we trooped round to the lawn in front of Bunna’s cottages for the mini-Highland games, where we met up with our Austrian friends Eva and Jasmine and our Swiss chums Bernard and Risto. 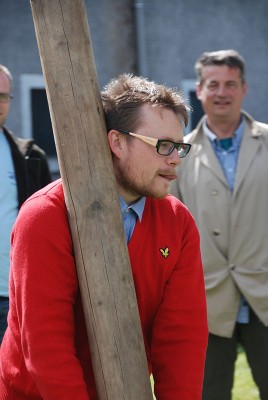 Joel struggling with his heavy wood

After some fairly pathetic horseshoe throwing (none of us got more than one shoe anywhere near the pole), we moved on to the caber tossing.  Joel’s massive pole was too big for him to get both hands round, so his attempts to toss it off were largely unsuccessful. Neil, on the other hand, was a natural, and he quickly proved to be a magnificent tosser of his admittedly smaller caber.

We were still hankering after a burger, so we decided to head for home by way of the Co-op for some instant BBQs.  On our return to the lodge we managed to knock out some delicious scallops, a tuna steak, some chicken and half a dozen burgers in record time, and feeling suitably refuelled we headed back into Bowmore to our pre-arranged forum meet-up in the Lochside. 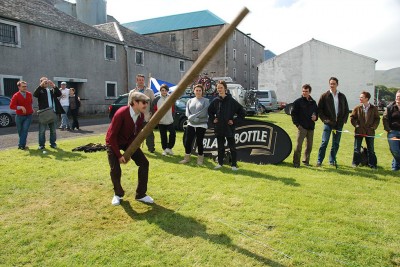 Neil quickly learnt that what counts is where you stick it

Duffie’s bar was heaving, but fortunately we ran into Gordon & Mel from Spirit of Islay as soon as we walked in.  Willie JJ and Malcolm were also there and before long we were joined by Eva, Jasmine, Bernard and Risto.  Islay ales and a couple of drams were consumed over a great chat before we headed our separate ways – it’d been a long day, not without its trials – and we needed our beauty sleep if we were going to be at our best for our big day at Ardbeg the following day…

The Falster Bunnahabhain is a bottling made for the ‘Wild Whisky Weekend’ held at Hotel Falster each year in October.

The reason why Ian Millar af Glenfiddich got a hold of one of the bottles, is probably because of Hans-Henrik that owns Hotel Falster – and -but not least- the world’s largest Glenfiddich collection.