Bang on 7am and our alarm clock blasts into action, as welcoming a sound as a prize festival bottling smashing on a stone floor and the accompanying ‘yelp’ of despair.   Last night was our ‘big night out’ and boy, we were all paying for it this morning.  As the memories started returning to our hazy heads, it became apparent that both Murdoch and Hannibal had found temporary ‘accommodation’ on, respectively, the bathroom floor and the green of the local golf course. 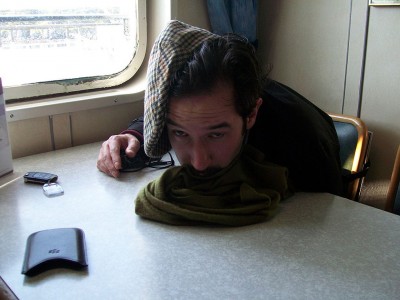 Aftermath: Hannibal before his Calmac fry-up

After some life-giving breakfast bananas, a frantic display of lodge clearance was instigated, with a few dozen sample bottles slipped into coat pockets, shoes, pants and anywhere they could be safely stowed.  With the screech of tyres, Joel gunned our battered hire car out of the Machrie seven minutes before our 9am deadline (the final check-in time for our ferry).  Somehow, we arrived at the port with 5 minutes to spare.  Surely a new island record??

The Calmac breakfast has entered folk lore since Iain Banks wrote of its high quality and ability to cure any drinks related ailment, so clearly it was the order of the day. Refreshment of our pallor’s and smiles was nearly instantaneous, and soon all memory of our previous day’s entertainment at Ardbeg was successfully restored.

After kicking back with the selected works of the greatest of all fictional Eastern European Bovine philosophers, the Immortal Cowjetski, the 2 hour journey to the mainland gave us all time to reflect on just what an amazing event the Feis Ile is and how much it represents the resilient spirit of the island’s wonderful community. It is as much about visiting old friends, making new ones and respecting Islay’s rich heritage, as it is about great whisky – and, with the exception of a few greedy and unscrupulous speculators (you have been noted) everyone threw themselves into making 2009 a year to remember. 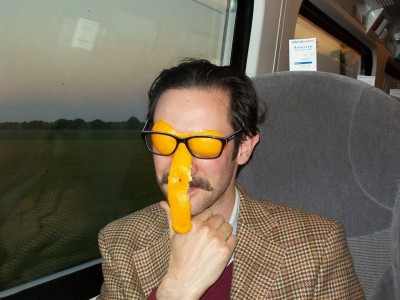 The Immortal Cowjetski having a good think about stuff

To celebrate, we’ve come up with a list of awards for those folks that went that extra mile to make the Feis Ile a right royal cracker!

Most Sorely Missed This Year:  Hans Moleman (runner up: Boyd)

Caskstrength.net and The Whisky Exchange Blog would like to thank the following ‘legends’ for making our festival the best so far. Adieu Islay and see you again in 2010! 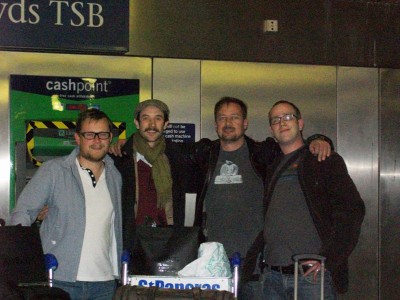 The last known image of ManDate

Postscript:  What happened to ManDate?

This photo, taken by a gobsmacked fan at King’s Cross Station on the last night of the band’s legendary Islay tour, is the last known image of ManDate before they disappeared to do their various side projects.

It is believed that Hannibal left to pursue a full-time crusade to save a priceless document detailing the exploits of his endangered species Chappius Hirsutis.  BA, meanwhile, was distracted from his ManDate commitments by an obsession with the Immortal Cowjetski, the noted Eastern European Bovine Animist philosopher, and Murdoch had been re-captured and shackled to his desk at The Whisky Exchange.  The whereabouts of Faceman are unknown.  One theory is that he was kidnapped by a harem of lust-crazed beautiful women.  Others believe he was asked to travel to Nepal to give the Dalai Lama tranquility lessons.

One thing is for sure.  If you’re in trouble, if you need help, and if you can find them – you’re probably better off with the real A-Team.

thanks for the mention, you guys had a fantastic time,i wish i had your energy to stay the course.anyway if all goes well will meet you for a drink next year.might need some tips on booking early for tastings.slainte

Enjoyed reading your adventures – and it was good to meet and share one or two drams! Next time you are in Edinburgh, drop us a line and I’ll buy you a drink.

Love it! Wish i was there boys.
Excellent correspondence – felt real.
xbx