The Islay Festival is drawing to close. Tomorrow is the last day, and in usual fashion, things are ending with a bang: it’s Ardbeg Day – or, as they are calling it this year, Ardbeg Night. Unlike the other Islay distilleries, Ardbeg shares its open day with folks who can’t make it to the island, and its festival bottling will be hitting the shelves of our London shop and website on Saturday – introducing Ardbeg Dark Cove.

This year’s origin story talks about the illicit history of distillation of the island, with tales of smugglers and their night-time exploits in the years before the founding of Ardbeg. But at the heart of it all, it’s all about the new limited release – ‘the darkest Ardbeg ever’.

Ardbeg Dark Cove is a classic combination of bourbon- and sherry-matured whisky, with a heart matured in ‘dark sherry casks’. No one is entirely sure what a dark sherry cask is, but with official tasting notes that talk about squid ink, coal tar and coffee, we can see what they’re aiming for. 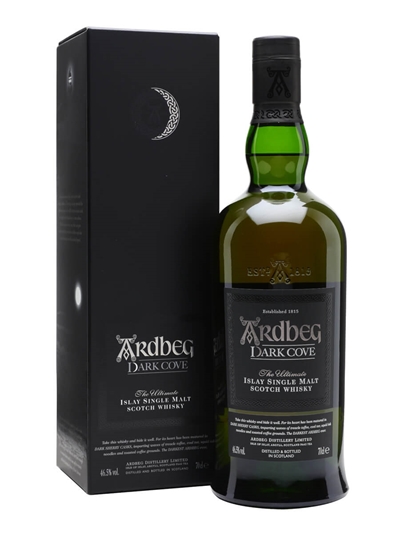 Palate: Softer than expected, with lots of char and ash up front. Coffee grounds and singed citrus lead to bitter dark chocolate and tar, before fruit cake, candied ginger and liquorice sweeten things.

Finish: Burning pine needles and black coffee fade to blackcurrant and liquorice, and Hall’s mentholyptus. The menthol lingers for minutes, along with a background of peaty smoke.

Comment: A complex nose leads into a surprisingly easy-drinking palate – there’s lots of flavour, but little in the way of boozy burn. However, the finish took me by surprise – it lasted happily through my washing up of my tasting glass and the making of a cup of coffee, and is still just hanging on as I type this, five minutes later. It may not be as dark as the name suggests, but it is classic Ardbeg.

Dark Cove will be hitting the website on Saturday and if you are in London, we’ll have it open and ready to taste at our Covent Garden shop. Pop in and say hello – dressing as a smuggler is entirely optional.