Behind the scenes, The Whisky Exchange is a very international company. We have people from all over the world throughout the business, from Spanish web developers to Romanian photographers, Portuguese designers, Finnish spirits advisers and even the occasional Scot. Among the variety of nationalities, we have a strong contingent from Nepal and when we heard about the devastating earthquakes in the country last year, we decided to do something. Cue a charity whisky bottling – Amrut Everest.

Originally launched at The Whisky Exchange Whisky Show 2015, Everest is a collaboration between TWE and Amrut. It’s a single cask which yielded about 100 bottles, first offered to those who had come to the show and tried it. We’ve got a small number left, so are now opening up those remaining bottles to everyone else. 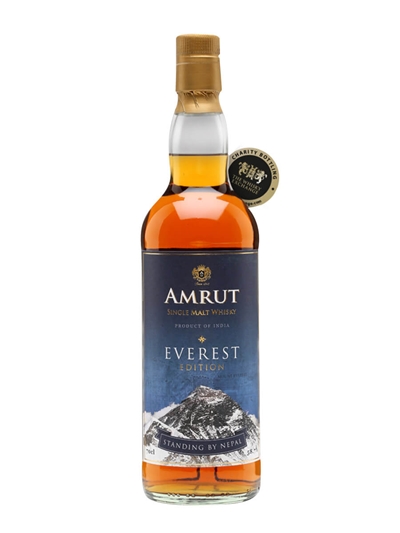 Nose: Honey-glazed apples, creamy porridge with a squeeze of lemon, and gentle spiciness. It develops marshmallow and banana notes, as well as vanilla cream and more zingy citrus.

Comment: Classic Amrut, with spice and fruit well-balanced, and excellent intensity of flavour. And to focus on the outside of the bottle for a moment, the label is some of our design team’s best work yet.

The proceeds from the sale of the whisky are all going to the Help Nepal Network, which is providing volunteers and on-the-ground supplies in the areas still trying to rebuild after the earthquakes.

We’ve been collecting money for Nepal for almost six months and have already raised £225,000 thanks to the Karuizawa tasting at The Whisky Show. One of our directors is heading over to the country next month to speak with those affected and see how we can help further.

Stay tuned for more details, but in the meantime, grab a bottle of Amrut Everest.

#Whisky Amrut Everest – Standing by Nepal: Behind the scenes, The Whisky Exchange is a very international comp… https://t.co/U1VwjYrx7a

Huge fans of @TWEBlog and @Amrutsinglemalt so seeing them team up so admirably for charity is worth checking out: https://t.co/ih7ncHNkt8