Laphroaig’s birthday celebrations have drawn to a close. It was their 200th, so we don’t begrudge them a year of partying, especially as it has featured a few special releases. Things kicked off with the 15 Year Old back in April, and continued with an excellent Cairdeas bottling at the Islay Festival, a Friends-of-Laphroaig-only 21-year-old and a travel-retail-exclusive 16-year-old. They’ve even made one of the best whisky adverts we’ve seen:

But they did one final celebratory release, saving the best for last – Laphroaig 32 Year Old, as previewed at The Whisky Show’s sold-out 200 Years of Peat masterclass.

Like many of the other legendary, long-aged Laphroaig releases, the new 32yo is all about sherry casks. To put the whisky together, distillery manager John Campbell sourced a variety of casks, including refills and spirit aged for up to 35 years. The finished whisky is bottled at cask strength with no added colour (and a clear glass bottle to show the liquid’s deep red hue) and no chill filtration. 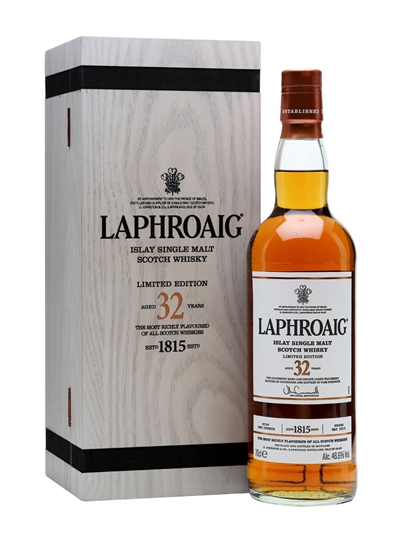 Comment: Much more intense than I expected from the small number of other well-aged Laphroaigs I’ve had the opportunity to taste. It has the fruitiness that I love in their whisky once the peat has started to fade, but also has lots of smoke and a punch of flavour from the sherry casks.

There were only 6,000 bottles available worldwide and most have now sold out. We have just a handful and they’ll be hitting our website on the afternoon of 13 January. If you’d like to receive an email when it goes live, click through to our website and sign up by hitting the Notify Me button.