Home   In Their Own Words   In their own words – Mark Thomson, UK Brand Ambassador, Glenfiddich

In their own words – Mark Thomson, UK Brand Ambassador, Glenfiddich

4 Comments on In their own words – Mark Thomson, UK Brand Ambassador, Glenfiddich 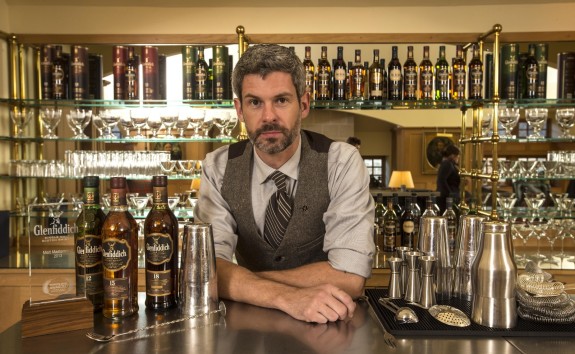 ‘I got into whisky because of my family. My grandfather, who recently passed away at 106, had drunk whisky all of his life. Sherry was his other tipple, but I didn’t speak Spanish so the sherry industry was out’

‘I’m from the east coast of Scotland, and I moved to Glasgow to the ‘bright lights’ and started working in bars. As a hobby I really got into wine. I suppose I realised I had some kind of palate, or at least thought I did and could pull some words together’

‘Working at CLASS magazine gave me access to a phenomenal array of not only whisky, but spirits as well, which focused me back on whisky as there was so much choice. It was a lazy decision – I’ve got a Scots accent’

‘When something’s consistently good and is available everywhere, people say ‘yeah, I know that’. My job is to to get people to try [Glenfiddich] again, because there’s a reason that we’re the biggest-selling single malt in the world – it’s bloody good’

‘The important thing to remember with Glenfiddich, which a few people forget, is that we are family owned and run. The key there is the running. There are a lot of family-owned business out there where the family have very little to do with the day-to-day running of the business: it’s more about the day-to-day spending of the money they make. It’s different at Glenfiddich’

‘Our whisky makers are very humble. When you get our malt master Brian Kinsman in front of a crowd, he goes: “It’s fruity. I liked this one when I made it. Anyway, slainte!”‘

‘Style is the thing for me when it comes to whisky I’m very much a savoury coastal kind of guy. Clynelish, Scapa, Old Pulteney – my gran was born in Wick. Anything with a bit of salty bite to it’

‘I’m not much of a sherry cask fan. I like them every now and again with a good cigar, but if I’m sitting down and enjoying a dram, it’s that bourbon-cask-aged, classic sort of [coastal] salty caramel flavour I go for’

‘Most of Scotland’s whiskies were once peated, because that was the fuel we used. Before the industrial revolution and train lines they didn’t have coal. And you have to pay for coal, whereas you can dig peat out of the ground’

‘I did a blog piece recently for Glenfiddich, about putting 12 Year Old in the freezer – it’s a great summer drink. I almost got death threats back on the Glenfiddich website. Apparently there’s a special place in hell for me, but if you’re going to go to hell, you might as well have something cold to drink’

Posted in In Their Own Words, Scotch Whisky
Tagged Glenfiddich

In their own words – Mark Thomson, UK Brand Ambassador, Glenfiddich: http://t.co/ULAHn9rOn8 via @whiskyexchange