Italy at the turn of the 20th century was a strange place. Having become a unified country in the middle of the 1800s, the new state had changed a lot, but was still steeped in tradition, creating a melting pot of ideas, combining the old and new. In 1909, as a reaction to the climate, a new artistic and social movement appeared: Futurismo – Futurism. Normally, this wouldn’t be a topic for the blog, but the Futurists didn’t only stick with the traditional arts, hitting everything from painting and sculpture to fashion, music and gastronomy. The latter is the bit that interests me, as it concerned not only food, but also cocktails.

The 1989 reprint of The Futurist Cookbook, now an expensive collector’s item.

At the core of Futurism was a love of the modern and a rejection of the past, and with Italy’s strong food and drink traditions it was only natural that a new approach to those would be part of the movement’s ideals. The first work on Futurist food and drink was La Cucina Futurista – The Futurist Cookbook – written by Filippo Tommaso Marinetti, the founder of the movement, and published in 1932. This was mainly concerned with food, but also contained the seeds of the Futurist approach to drinks.

‘We want no part of it, the past – we the young and strong Futurists!’
-Marinetti

The recipes and approach to food were an inversion of the past, with a focus on the artistic side of cooking. There was an obsession with appearance, with elements of dishes created just to be seen and smelled, and with the surroundings and their influence on the experience. This continued into the world of cocktails, adding a theatrical experience to the act of drinking. As part of their reconstruction of the gastronomic world, they renamed elements of the menu, using traduie rather than sandwich, peralzarsi instead of dessert and calling their cocktails polibibite – ‘multi-drinks’.

The environment for the development of polibibite was very restrictive. Mussolini came into power in 1922, the Great Depression started to bite in the early 1930s, and, after the Italian invasion of Ethiopia in 1935, trade embargoes stopped most foreign-made drinks reaching the country. For the nationalistic Futurists, this pushed them to using predominantly Italian ingredients, but, fitting in with the movement’s ideals, using them in new and untraditional ways. They mixed drinks that were usually drunk on their own, added non-drink ingredients and generally disrupted the concept of the traditional cocktail – in the 1930s you didn’t often see a glass garnished with a lump of cheese or have a hard-boiled egg yolk floating in your drink. The original Futurists weren’t bartenders or cooks, and they came to cocktail making without any of the methodology of the past. This led to a fresh approach to drinks, with predictably mixed results. 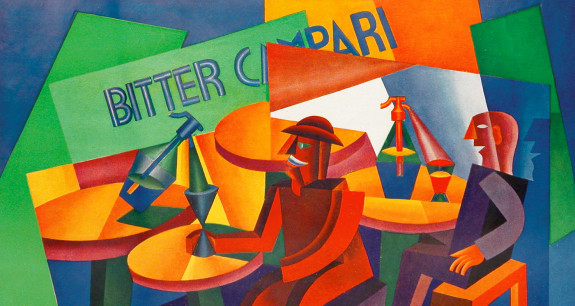 Drinks brands embraced the Futurist style, as exemplified by Depero’s advertising campaigns for Campari and his design of the Camparisoda bottle, still used today more than 80 years later.

They divided polibibite into six categories, each based on what the drinker was intending to do after consuming their drink – a twist on the usual approach of matching drinks to what you’re currently doing or, as with digestifs, what you’ve just done:

To understand quite how strange the drinking of a Futurist cocktail may have been, here’s a walk through how you might experience drinking an Avanvera, a polibibita taking its name from the Italian phrase a vanvera meaning ‘without thinking’ or ‘nonsense’:

The cocktail itself is a mix of vermouth, Italian brandy, Strega and sliced banana, poured without measurement and then combined however the bartender wanted. The glass was served on a polished metal platter, surrounded by Ethopian coffee, bananas and almonds – representing Italy’s overseas colonies – and tomatoes, anchovies and Parmesan cheese – standing for the country’s home-grown produce.

To accompany the drinking experience, someone might regularly beat a sonorous-sounding gong, someone else might spray perfume behind the drinkers, and there would be opportunity to handle textured materials – sandpaper, wood, metal, soft and rough fabrics – to make sure that the sense of touch is being properly stimulated

Fortunately, the Avanvera can taste pretty good. Italian teacher and former bartender Fulvio Piccinino has been investigating the history of Futurist cocktails and has recently written a book about them, including recipes with proportions – it may be against the Futurist ideals, but it’s certainly helpful when trying to make them at home. 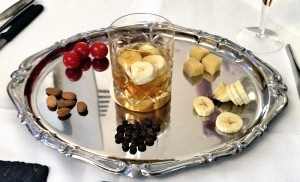 Pour the ingredients over ice in a tumbler and stir, before adding the banana slices and a cocktail stick to help get them out of the glass if you want to eat them.

On the nose there’s a sweet aniseed note and some funky banana, which disappears on the palate. There, it’s rich, sweet and spicy, with cherries and nutmeg joined by a hint of the anise from the nose. It finishes with some darker, bitter notes, with black liquorice and green herbs.

While Futurism had a serious side, the cocktails show a key aspect that doesn’t always come across – a dedication to fun. The purpose of the drinks was to surprise and create enjoyment. They were drinks with a manifesto shot right through their centres, conversation starters which also (sometimes) tasted good.

The current cocktail renaissance many not have brought the Futurist style of drinks to a wider notice yet, but the influence of the movement is still felt. Any time you hear of a bar using dry ice, piling huge garnishes around a glass or creating drinks that confuse and delight, think back to the Futurists. Their drinks may not always have been successful and the movement may have darker undertones due to the political environment of 1930s Europe, but their fondness for the ridiculous has leaked out and is still visible in the crazy cocktails of the 2010s.

You can find out more about La Miscelazione Futurista/Futurist Mixology, Fulvio Piccinino’s book, written in both English and Italian, here, and see slides from the talks that he and Roberto Bava of Cocchi have been giving at seminars around the world here.

I wrote a thing about cocktails, Italy and the Futurist movement. It is further evidence that I am not a historian – http://t.co/3cqqewRD1S

@doniree This may (or may not?) be relevant to your and @saBR0na ‘s interests? http://t.co/bFrJWkfCyj

@thebeardyman @ginandcrumpets If it does not match the Futurist cocktail experience it will have fallen short https://t.co/ly2Bnibqfk

[…] The classic serve is Campari and soda, sold premixed as Camparisoda using a bottled designed by Futurist artist Depero in the 1930s, but my serve of choice is the Negroni – the classic, […]