We quite like awards at TWE. Every year we seem to pick up a few, but other than the TWE Blog Awards that we have yet to repeat (one day…) we generally seem to sit on the receiving end. This year we decided to give something back – an award of our own.

Initially we went with the rather general brief of ‘Best Whisky’ but the prospective list of 50ish that we came up with seemed to be overkill, especially as every whisky had only one vote. A few discussions later and we came up with our criteria for inclusion.

The Whisky Must Be:

Another round of asking for suggestions later and we ended up with another list of 50 whiskies. Some arguing occurred. I may have used the phrase “I am best and so is this whisky”. A chair may have been thrown. Well, rolled towards someone in a menacing fashion.

Rather than just let Sukhinder decide (the way most arguments are solved at TWE HQ) we decided to throw open the decision to the people who should choose – our customers. A whisky tasting would be held at our shop, a vote taken and a winner announced.

[In no way should this be interpreted as making our customers do our work for us. That’s not what happened at all]

We wrangled the list down to a mere eight whiskies and set up the tasting: 60 people, 8 whiskies – all tasted blind. 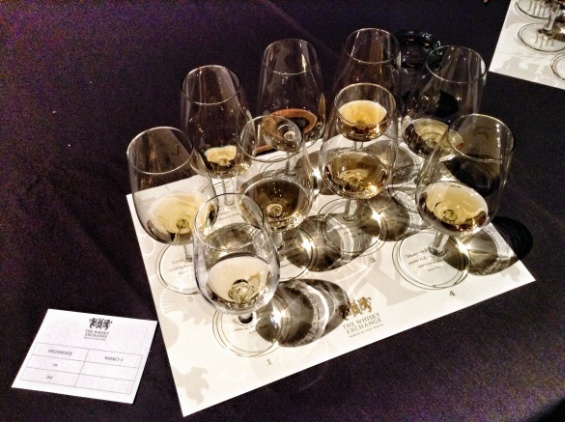 Yes, there were 9 whiskies on the mat. The final one was a TWE exclusive Glengoyne as a thankyou for helping choose the award. It was really nice…

Our marketing manager and, for the night at least, Brand Ambassador Nick Tether took to the podium as MC, but the focus of the evening was discussion – we wanted each table to talk about the whiskies and give everyone some fodder to help choose their favourite dram of the night.

After much discussion a vote was taken and, as the geekiest member of the TWE office team, I counted up the ballot papers. After an afternoon of voting system research I had settled on a simple AV approach, similar to the London mayoral elections. Unfortunately, all of my efforts were for naught and the results in the end were the same as if we’d just counted who had the most votes. The perils of being an election geek.

So, without further ado the results for The Whisky Exchange Whisky of the Year (with some constraints) 2013, in reverse order, are as follows:

Joint 5th Place: Glencadam 15yo, Benromach 10yo, Balvenie 12yo DoubleWood

…and in first place: 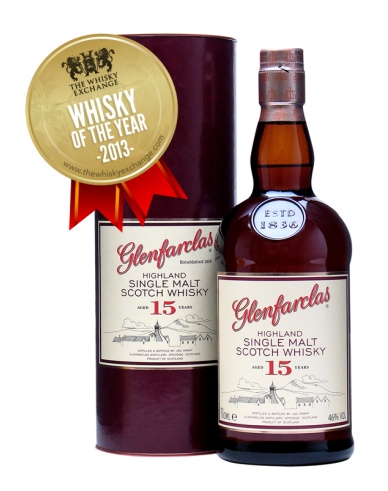 Palate: Buttery with brown sugar, allspice, more cinnamon and the rest of the brown ground spices hiding at the back of the cupboard.

Comment: The story goes that this is bottled at 46% as a nod to one of the earlier George Grants, who wanted to balance the taste of the whisky against getting enough out of a special Christmas release to go around the entire family. Whatever the reason, the higher strength gives this a bit more oomph, which along with the Christmas cake, dried fruit and spiciness makes this an excellent winter dram, and an excellent sherried all-rounder.

Congratulations to the lovely folks of Glenfarclas on their win – it’s a great whisky and there was no quibbling from the assembled crowd. After the tasting many people wandered off to the shop in search of one of the runners up – the number of attendees who already liked the Glenfarclas or Lagavulin and wanted to pick up something new made the tasting doubly worthwhile. They’re all great whiskies and definitely worth a try.

Especially the Tamdhu. That was my first choice. I am best.

#Whisky Whisky of the Year 2013: We quite like awards at TWE. Every year we seem to pick up a few, but other t… http://t.co/z0NOb2acwU

@WhiskyExchange Whisky of the Year 2013 event http://t.co/8ItrPwPz63 – thanks to @cowfish for providing our table’s expert opinion

#ff The makers of the winner of our Whisky of the Year award: @glenfarclas for their 15yo – http://t.co/LlunBAaRfA

[…] Whisky Exchange in London have recently voted the Glenfarclas 15 their whisky of the year, so I thought I’d explore my experience with this sherry […]