One of the things that we’ve become known for at TWE Whisky Show is our masterclasses. From the legendary Port Ellen vertical in our first year, to Serge Valentin’s Brora masterclass in year two and last year’s Gordon & Macphail Timeline (with the Glenlivet 70yo as a final dram), we’ve made sure that we’ve had some pretty impressive whiskies on the mat. This year was no different.

The first class on Saturday was also the first to sell out – From Scotland to Japan with Dave Broom and Friends.

Morrison Bowmore Distillers are part of the Suntory family, which also includes Yamazaki and Hakushu distilleries. This puts them in the unique position of being able to source single malt whisky from two continents and made them the obvious choice to approach about putting on a tasting showcasing the world of Japanese and Scotch whisky.

From the off it was clear that this was not to be a battle, more an exploration of the different ways each country could show off a range of stylistic facets, and we were lucky to have Dave Broom on board to create an interesting framework in which to present the whiskies. He selected three ‘notions’ in whisky and asked our two country representatives to select drams that they felt demonstrated that aspect.

Dave was joined by Tatsuya Minagawa, Suntory’s European Brand Ambassador, and Rachel Barrie, Master Blender for Morrison Bowmore , who each chose whiskies to best represent the ideas of Lightness, Fruit and Age. 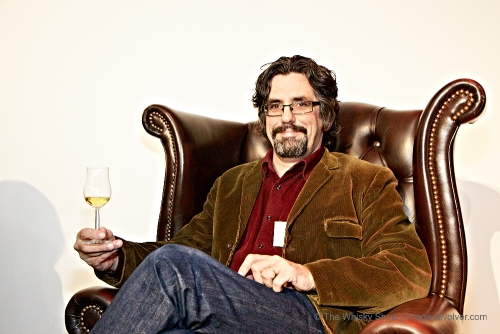 Our host and ringmaster for the tasting – Mr Dave Broom

Rachel led off with an Auchentoshan 1999 matured in a first fill bourbon cask.  This whisky is usually only available from the distillery, and is presented at 59.9%. Auchentoshan is generally known as a lighter spirit, with its triple distillation removing a lot of the complexity of the new spirit. This allows the wood to have a great influence over time, adding flavour rather than having to temper the impurities in the new make.

Tatsuya had brought a high strength version of  Hakushu 12 year old, bottled at 50%. Japanese whisky has a different approach to lightness, with lightly flavoured spirits being very much the preferred style in the country at the time of the early whisky releases – Suntory’s original White Label wasn’t particularly successful, in part due to its more traditional Scottish weightiness, but the Kakubin which followed it is still the number-one-selling whisky in Japan to this day. 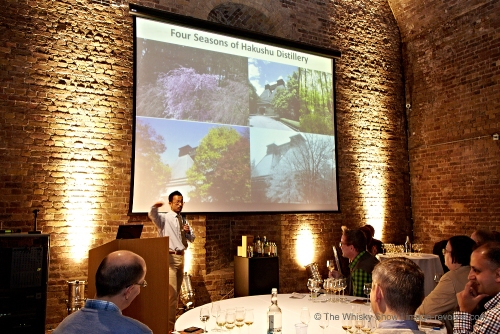 Tatsuya talking us through the world of Hakushu

Tatsuya kicked off notion number 2, a theme that Dave explored in last year’s Tropical Fruit tasting at the Show, with another whisky from the same distillery – Hakushu 18. Due to the way that the Japanese whisky industry works there isn’t the buying, selling and swapping of casks between companies that underpins the creation of Scotch blends. Instead each whisky company creates all of the various whiskies they require for their own products, which also gives the single malt teams a wide range of different spirits to play with. Hakushu makes a range of spirits with different peating levels, giving them the flexibility to create a fruity 18 year old expression.

Palate: Spiky wood, vanilla cream, apples, pears, sharon fruit (with thanks to the gentleman sitting next to me for that note) and rich figs underneath.

Rachel went for the other end of the fruitiness spectrum and presented a Glen Garioch 1997 cask sample, drawn from a bourbon cask. Glen Garioch make a rich and spicy new make, and fruity flavours develop over time in the cask. Rather than the fresh, sharper fruit that is found in the Hakushu, theirs is more towards what you’d expect from Scotch, with orchard fruit and a lean towards cooked flavours. 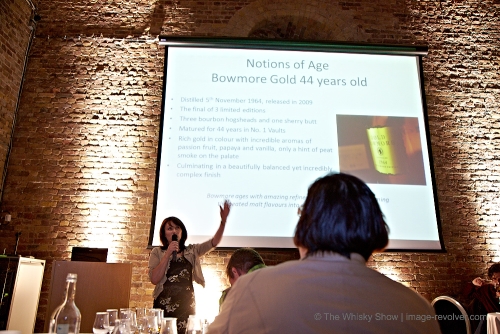 Rachel on the effects of age on Bowmore

The final whiskies for the tasting were where the anticipation was focused and Rachel led off with Gold Bowmore, the last entry in the most recent trilogy of bottlings from 1964. It’s a whisky that’s seldom seen open these days, more often found in collections, and it’s a vatting of three bourbon casks and the last of the famed 1964 oloroso casks that were the foundation of the legendary Black Bowmores. It was released in 2009 at 44 years of age, matured carefully to ensure that it still remained vibrant and elegant, showing that age isn’t all about extracting dark flavours from the cask.

Palate: Subtle and without much alcoholic punch, but packed full of the fruit from the nose, with extra Haribo sour cherry chews and freshly picked gooseberry.

As with the notion of fruit, the other whisky approached things from a very different angle – Tatsuya presented the Yamazaki 1984. Matured in very different climes to Islay, it spent 25 years in wood before appearing in 2009. In this case it was one element of the vatting that really required the time – mizunara, Japanese oak. Only used in small amounts in Yamazaki’s cask portfolio, mizunara imparts an interesting spicy edge at younger ages, but opens up a world of incense and sandalwood with longer maturation.

A fantastic array of whiskies, finishing with a pair of legendary drams, and some great discussion about the nature of flavour and the differences (and similarities) between the dual worlds of Scottish and Japanese whisky making – this tasting kicked off the Whisky Show’s Masterclass programme in superb style.  Many thanks to Rachel & Tatsuya for some memorable whiskies and to Dave for chairing the proceedings.

[…] on behind the scenes at Glen Garioch. Rachel waxed lyrical about her love for the spirit during our From Japan to Scotland tasting at last year’s Whisky Show and it seems that she’s now had some more time to do […]