11 Comments on A trip to Balblair

The lovely folk of Inver House Distillers (the Scottish production wing of International Beverages) recently invited me along to a trip around four of their distilleries with a bunch of international bloggers. Not being one to turn down distillery tours, especially those conducted by distillery managers, I said yes and spent a couple of hectic days at Balblair, Old Pulteney, Speyburn and Knockdhu. So, here’s part one of my trek – Balblair. 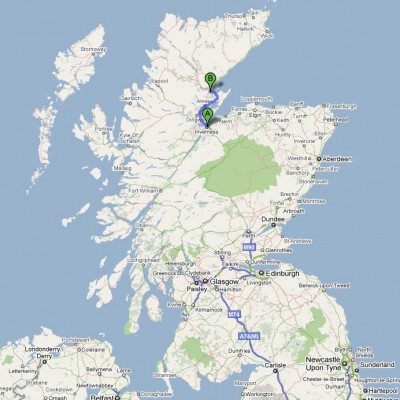 I was picked up at the airport by Cathy James, our driver and minder for the trip, along with Gal Granov, from Whisky Israel, Håkan Dahlberg from Vi som älskar Whisky, and Johan Baeckström and Tommy Deile from Whiskyblogg.se. We then sped down (up?) the fabled A9 until we hit the Dornoch firth and then headed east to meet up with Lukas Dynowiak, our other shepherd (and one half of the Edinburgh Whisky Blog), and Mark Gillespie from WhiskyCast, who were already at the distillery.

Balblair is the oldest working distilery in The Highlands, starting out in 1790, and is sat in the small town of Edderton on the south side of the Cromarty firth. It’s farming country, with fairly flat land and the occasional rolling hill, and appropriately the first incarnation started off at Balblair farm, a couple of miles from the current distillery. Not much remains of the farm now, with no particular obvious signs of a structure other than a section of floor, and its main legacy to the distillery is the name. They moved to the current location in 1883, but kept the same water source, the Allt Dearg burn, which now flows in an open ditch for the 4.5miles to the distillery. 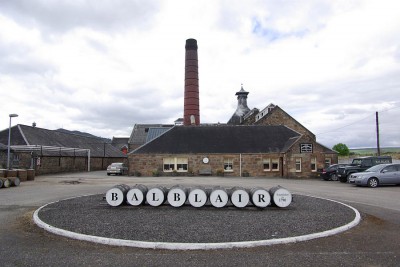 Our guide on this first leg was distillery manager John MacDonald. John started his whisky career down the road at nearby Glenmorangie in 1989 as a warehouseman. Following the traditional managerial career path he worked his way up through milling, mashing and distilling until he became assistant manager in 1999. However, when the grapevine started leaking the potential of then Balblair manager Derek Sinclair moving on to something new he made his move and took over in 2006. 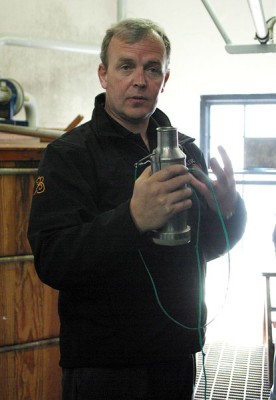 We started our tour by the old malt barns. Malting at the distillery stopped in 1975 and the malt barns have been used for storage since. They are currently earmarked for use as a new visitor’s centre that should open later this year, but before then they have another purpose – a film set. Ken Loach’s next film, Angel’s Share, is about whisky (as much as Ken Loach’s films are about anything but the people in them) and the barn has been dressed up to be (from the glimpse we caught through the door) an impressive looking whisky bar. There should be a couple of cameos (well, extras roles, at least) for some of the distillery staff, so keep an eye out when it appears in the cinema.

We moved on from there to the milling room, where their Porteus mill has been churning through grain for years, producing 4.25tonnes of grist for each of their mashes. Their mash tuns are stainless steel and have a deep mash bed, which allows for a slow mashing process that produces a clear ‘bright’ wort that allows for more flavour to be created during fermentation. The water from the burn is slightly peaty, having been filtered through the peat heavy surrounding countryside, and while this doesn’t directly affect the flavour of the whisky it does influence the fermentation process. 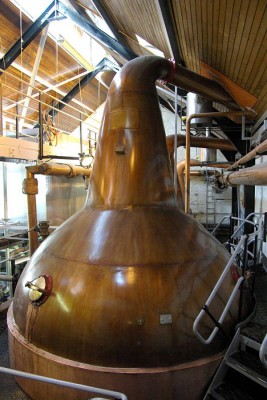 Balblair has 6 Oregon pine washbacks to hold the fermenting wort, each holding 23k litres of liquid. A long 73 hour fermentation produces a wash at about 8% alcohol by volume which is rather reminiscent of Hoegaarden (we got to have a wee sip).

When fermentation is finished the wash still is charged with 19k litres for the first distillation, which drops to 2-2.5k litres of spirit after the second distillation – about 100 hogsheads per run. The second distillation runs for about 6 hours, with the spirit cut taking about 2.5 hours to run through, ending up with a strength of about 68%. The spirit vapour runs from the still through a shell and tube condenser which has been in use since the distillery’s worm tubs were replaced in 1909.

The lees and pot ale left over from the first distillation are pumped out to sea, where it is rapidly dispersed across the firth and provides a food source to the active marine ecosystem.

Balblair currently fills about 2500 casks per year of which only 12% goes towards single malt. The majority of the remaining casks are swapped with other distillers to provide the stock that International Beverages need for their various blended whiskies worldwide. While the blending spirit is matured in various locations, including Inver House’s warehouses in Airdrie, all of the whisky filled for single malt is matured on site. Most of the casks used at Balblair are ex-bourbon, second-fill by John’s preference, with about 5% being ex-sherry. 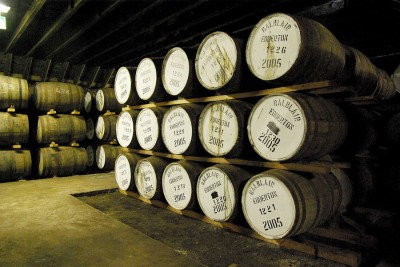 Some casks, having a rest

Next on the agenda was the bit that we’d been waiting for – a tasting of their wares. We started off with the new make spirit. It came straight from the still, so this was an eye watering 68-69%, but it was still worryingly drinkable. My notes:

Taste: Very sweet, with red apple, malt and mango rounded out by a touch of leather

Finish: Quite short, as you’d expect from new make, with a bit of fruit.

Comments: Not one that you can find in the shops, but definitely one for fellow whisky geeks to beg a taste of. 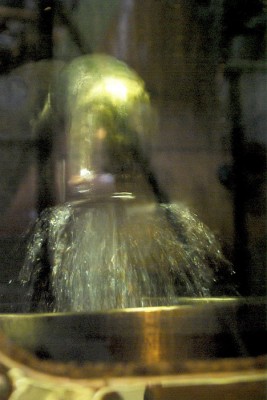 The first of the regular range we tried was the Balblair 2000. The distillery switched to vintaged releases rather than bottling its whiskies with age statements in 2007 and this is the most recent release in their range, replacing the now finished 1997. It is bottled with its natural colour at 43% and is chill filtered.

Comments: A drop of water makes everything a bit more creamy and softens the bitter end of the finish. An elegant start to the range.

Next was the Balblair 1989, their second release of the vintage, now about 22 years old. Again it is naturally coloured, as are all of the Balblair malts, bottled at 43% and chill-filtered. This is a marriage of 42 casks, all second fill bourbon.

Taste: Creamy up front, developing into a central flavour of spiced fruit, with bananas, apples and a hint of leather

Comments: I was rather chuffed to see that John remembered (or cunningly researched) the tasting note I gave for this at a Twitter tasting last year – ‘Ripe bananas squashed on a hot leather car seat’. 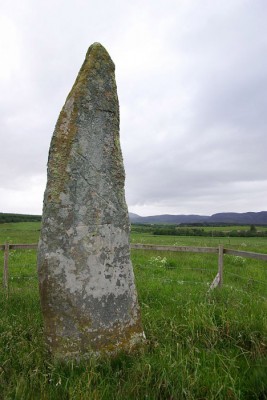 The final whisky in their regular range is the Balblair 1978, brought in to replace the 1975. It’s a 30 year old whisky that is bottled at 46%, not chill-filtered and not coloured. This one rather intrigued me as I was born in 1978 and am looking for whiskies to stockpile for my 40th birthday…

Comments: Water brought out the lime from the nose and also sweetened everything up. This is definitely one for my 40th birthday list.

The final glass on the table was something rather special – peated new make. Balblair’s regular spirit isn’t peated but due to a need within International Beverages for peated spirit for blending they recently distilled their first batches of peaty spirit – a 79ppm new make. John has managed to keep back a few casks of the peaty spirit for maturing on site, so keep an eye out in about 10 years to see what becomes of it…

Taste: Chocolate limes and coal smoke at the front, with big sweet apples and pears in the middle.

Comments: A bit fearsome but still definitely the same new make, just with a slab of smoke almost swamping the other flavours. Water calmed it down a bit and my notes say “Like a shisha pipe with apple tobbaco”.

On my way up to Scotland I did the traditional browse around the shops at Gatwick airport, but rather than buy whisky (I saved that until the way back) I picked up a video camera. So, here’s the first bit of footage I managed to squeeze out of it, despite having all the settings wrong…

With a quick vote of thanks to John, and a couple of quick photo opportunities by Clach Biorach, the nearby pictish standing stone, we were bundled into the back of our van and set off northwards for our next destination – Old Pulteney, the most northerly mainland distillery.

Mark also did some filming and audio at Balblair, with a touch more success than I, and that’s over on his WhiskyCast HD channel and in WhiskyCast 320. Tommy and Johan also put up a post, but as it’s in Swedish I have no clue what it says. I can’t see the word ‘Billy’ in there, so I’m assuming my complimenting of the English accents they were cultivating during the trip did the trick…

Lovely Post my friend.
Brings back memories.
I’d love to go there again NOW!
so hot in Israel now, i miss the Scottish Summer (A.K.A Winter – in israel)…

Guys, was an honor to meet you all. and of course Lukasz and Cathy, you both rock!

I’ll second Gal’s comments…well done, Billy! Great photos, too (the video’s not playing on my iPad because it’s in Flash). Thanks for mentioning the rest of our posts as well…

Mark: I’ve added a link to the video’s page on Vimeo – I think they have something there that works with iOS.

Jögge: Make sure you call ahead – until they they get the visitor centre built it’s by appointment only. They do an excellent tour, but they need to make sure someone’s around to do it 🙂

[…] trip around the Inver House distilleries.  If you haven't already, check out his visits to Balblair and […]

[…] House distilleries. I know at least Balblair is making smoky spirit already, as I tried it when I visited back in early 2011. That spirit will be legally whisky in about a month, so if the anCnoc whiskies make the impression […]

[…] the most important bit is that it closes at 11:59pm GMT on 14 November 2014. To whet your appetite, here’s my blog post from when I visited a few years back. They’ve finished building their visitor centre now, and […]

[…] more about Inver House’s distilleries, I visited them a few years back – find more here: Balblair, Pulteney, Speyburn and […]