The folks over at William Grant & Sons like a bit of interesting marketing. Their portfolio stretches outside of the world of whisky, with both Hendrick’s and Sailor Jerry Rum on the books, and over the last few years they’ve been doing some interesting things. We’ve had locked boxes of whisky sent out to a select group of whisky bloggers with Glenfiddich, sponsoring gigs and sending out samples to attendees in a box shaped like a book for Sailor Jerry (which I still think looks like Jailor Serry in their updated logo), and an array of entirely mad things with the folks at Hendrick’s, with their former sponsoring of The Chap Olympiad and ‘Horseless Carriage of Curiosities’ roadshow amongst other things. 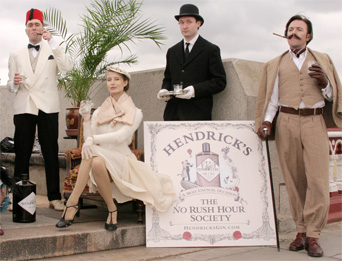 Hats and moustaches, that's what it's all about

Now it’s the turn of The Balvenie to get a bit of the mad marketing treatment, following on from their recent Whisky Academy and the expansion of their Warehouse 24 club, in the form of The Balvenie Whisky Den.

The plan this time focuses on Balvenie’s obsession with Craft. They have their own coopers on-site and bill themselves as a whisky made by craftsmen rather than a mass-produced spirit as many whiskies now are. To show this they have set up a pop-up bar near London’s Covent Garden and are still building it while people wander around with glasses of whisky.

They started on day one with an empty pair of shop floors and over the space of the month that they are open they hope to fill it with the furniture and other adornments that you’d expect from a whisky bar. On my first visit on the Thursday of the first week they’d just hung a sign up outside (made out of a barrel top, naturally) and had a handmade bar, some lighting installations, some barrel racks, and some barrels for tables. The stairs to the downstairs were closed to punters and occasional sounds of building floated up the stairwell. It was a bit bare and not all that welcoming, although having a dram forced on you as you walked in helped on that front. 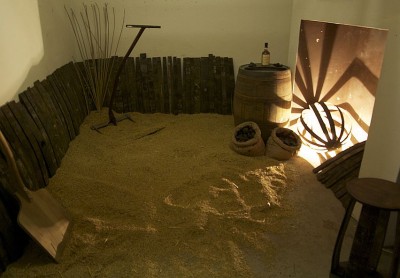 A home away from home...

Last week was the press launch, strangely a week and a half into the month. However, on arrival it very much made sense, with the bar clad in staves, pictures and shelves on the walls and the downstairs area slowly filling with stools (two barrel ends and some staves bolted together by the on-site building and design team) and tables (more barrel ends, staves and bolts), and grain (with half a ton delivered and a few more on their way to give an interesting alternative floor covering to the more traditional ‘carpet’).

The plan is to continue the build through the month, tweaking the increasingly finished bar with more furniture, lighting and mainly whisky barrel related artworks, before tearing it all down at the end. I suspect we’ll see the bar, tables and stools appearing on the road with Balvenie in the future, but the rest of the place is temporary.

Along with the building of the bar there is, of course, whisky, with a range of drams available for sampling, focusing around the DoubleWood and Signature. DoubleWood is the whisky that’s forced into your hand on entering The Den, one of Balvenie’s long running classics, and here are Tim’s tasting notes:

Sweet fruits, oloroso sherry and vanilla on the nose.
The palate is smooth, rich and mellow, with a nutty sweetness and hints of spices along with the sherry notes.
The finish is long and warming.

While the DoubleWood is rather nice, it’s the Signature that they’re paying a bit of special attention to. Created in 2008 to celebrate Master Blender David Stewart’s 45th anniversary at Balvenie, it’s his ‘signature blend’ of Balvenie’s malts, bringing together sherry, first fill and refill bourbon casks to create his distillation of the idea of Balvenie’s whiskies. One of the things they get you to do at the distillery is to try and make your own version of Signature, giving you cask samples from the three different cask types and a glass to do some mixing in, and The Whisky Den has brought this experience down to London.

Last Friday night I visited with the London Cocktail Society to see how some mixed spirits fans would fare in the world of malt whisky blending. Rather annoyingly they did rather well, with Team Backstage’s winning blend veering away from the Signature’s flavour but staying in tasty whisky territory. 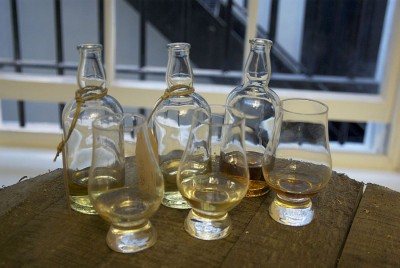 What could be easier than a 3 ingredient recipe?

Here are some notes on the three cask strength components:

Lime, brine and vanilla sponge on the nose. A grown up lemon cake?
Flavours of citrus, caramel, light wood smoke and spicy syrup, backed up with an alcoholic punch. Water calms it a little and adds sweetness.
The finish is long with syrup and a hint of salt. 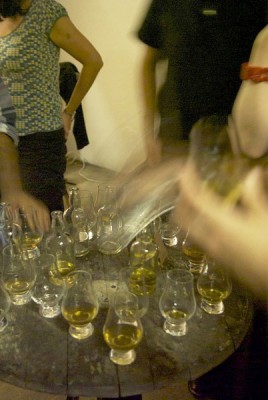 Recreating the Signature was difficult...

Recreating the Signature was difficult, as with only 1 cask of each type we couldn’t get the variation that David can with his several hundred. The refill bourbon cask was also quite a beast – the wood had done a bit of work on the new spirit, but it was still a bit of a punch to the chest and easily unbalanced our blends if not used judiciously. Having discarded a rough recipe for the real Signature, of even measures of each of the samples, we generally ended up with the first fill bourbon supplying the core of the dram, with some sherry to add a bit of depth and the refill for some punch. Nice whiskies, but not quite the real Signature. Here’s what I thought of it:

Hints of fruit, nail varnish and meaty Bovril on the nose.
A palate of caramel, vanilla, popcorn and woody spices, with more sweetness brought out by water.
A long finish, sweet and woody.

So, get down there before the end of the month if you can. Along with the welcome dram of DoubleWood they also have bottles of Signature, Single Barrel and Port Wood available to taste, and they have guided tastings every Saturday, although you’ll need to pop in to book a place. The deconstructed Signature tastings are available on an adhoc basis but you’ll need to be a member of their Warehouse 24 club, which they’ll happily sign you up to onsite.

The Balvenie Whisky Den can be found on Google maps here, and in the real world at 34 Tavistock Street, WC2E 7PB, near Covent Garden. It’s open from 1pm-8pm (although they’re often open a bit later depending on how many people turn up) and it closes for the last time on June 5th.

I got the 12yo double wood and must say it is my favourite “normal” whisky. I also own the Golden Cask and love that. Have tried the 10yo Signature which is also very good and the 21yo port wood which I did not like.

They had some other bottles squirreled away behind the bar and I also managed to get a taste of both Port Wood and Single Barrel – I rather liked them both, but I am finding myself worryingly drawn to port finished whiskies of late (although when I don’t like them I REALLY don’t like them). Annoyingly I didn’t like the Golden Cask – one of my friends who came down to The Den with me on my first visit picked up a bottle from the distillery a while back and poured me a dram. I just found it a bit boring. I think I definitely need to have another taste, I wonder if Steve has finished his bottle yet…

They have a few other bottles hidden behind the bar, so I got to have a taste of the Port Wood for the first time in ages – I rather liked it, but recently I’ve found myself liking almost every port finished whisky I’ve tried (although the ones I didn’t like I REALLY didn’t like).

I tried the Golden Cask a while back and found it a bit boring. I think I need to have another go as my tastes have recently turned back to the sweeter Speyside end rather than peaty face punches.