I only got a small olfactory glimpse of this one as I had to share a sample with two fellow attendees at the Laphroaig tasting in Albannach I told you about on Monday.  Unfortunately, over-attendance at a previous tasting meant there wasn’t enough of the nectar for everyone to have a measure to themselves.  I’m determined to rectify that when I get to Islay for the Feis Ile.  This is a generous whisky, and a generous whisky calls for a generous measure, and I’m not really the kind of chap who goes in much for self-denial. 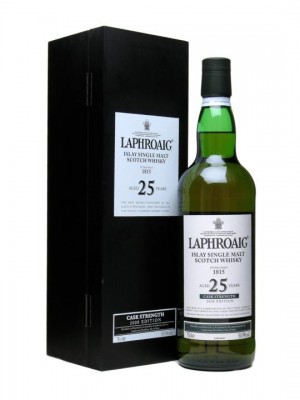 Thankfully, although the sample was small, the whisky was not – it had such a big character that the tiny sip I got was enough to let it express itself to my tastebuds:

Nose:  Quite farmyardy to begin with, then wet flax, linen and a delicious sooty smoke – the signature Laphroaig coaldust aroma. Old school Laphroaig of the best kind.

Palate:  Richer than expected, with both a big coal hit and a syrupy, sherried sweetness.  Very seaweedy.  Develops woodsmoke.  Power, sweetness and complex peat / smoke characteristics, with a reassuring weight on delivery.  An accomplished, polished dram.

Comment:  Much, much better, in this reviewer’s opinion, than the first batch of 25yo which was bottled at 40%.  The extra strength gives this dram a far more assertive personality.  This is classic old Laphroaig at the top of its game.

You had quite a Laphroaig week, I gather.
Any idea of the price? Probably beyond my budget, but curious all the same.
Did they tell you when the 18 yo will hit the market. I am doing an Islay tasting on the 2nd of May and I had the 15 yo as the Laphroaig entry, but I would dearly let them sample the new 18.

The 18yo should be here soon, hopefully within a fortnight or so. Laphroaig has just changed agent in the UK, that’s possibly the reason for the delay.

I tasted this one in Feb. I think we are lucky to have this one earlier. But obviously with 50% higher price.

However, I don’t quite like this bottle, I think it’s a similar batch with normal 25yo 40%. Maybe just slightly better.