A few weeks ago I was lucky enough to be invited to a Laphroaig tasting held at Albannach (a posh whisky bar in Trafalgar Square in London).  I’m not often invited to this sort of event as I’m not very important in the grand scheme of things and very few people know who I am – the majority of the tastings I go to are our own events organised by TWE Vinopolis – so this was a real treat.

The tasting was hosted by the Laphroaig distillery manager, John Campbell, who was candid in response to requests for technical information, modest and self-effacing with regards to his own achievements and clearly fiercely proud of both Islay and the Laphroaig distillery and its products – and rightly so, as the new releases are superb.  In an age of PR bull and marketing waffle, it was refreshing to be told about a product by someone who actually knew what they were talking about, and was able to communicate in a sincere manner without ever slipping into hype.

The Laphroaig 18 (which is replacing the much-loved 15yo) was being bottled that day, so we tasted a pre-production sample.  Laphroaig 18 has been bottled at 48% (the same strength as the Quarter Cask) and is due to arrive imminently, with a pricetag of around £50. 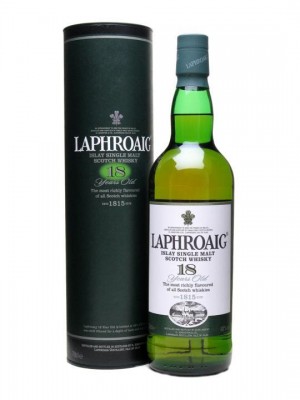 Nose:  At bottling strength, a soft toffee sweet, faintly spicy flavour counterbalances the trace of delicate phenols and fruit.  There is an all encompassing smoothness when these are all brought together. Adding a touch of water allows the seaweed and salt to come through but not enough to overpower the vanilla and honey sweetness with just a trace of new mown hay and peat at the finish.

Body:  An intense depth that is exceptionally balanced and warming.

Taste:  An instant warming tang of smoke that fades into smooth floral scents and blends seamlessly into an oaky nuttiness and leaves a lasting sweetness on the taste. With a touch of water the peaty warmth fills the mouth but does not overshadow the sweet chocolate smoothness. This is balanced by the rich toffee taste and slowly fades into a delicate hint of heather and peat smoke.

Palate:  Big and powerful, but with a soft sweetness and generous texture.  As well as the textbook Laphroaig coal, I found burnt wood, black pepper, barley sugar and roasted cereals, with an underlying honey/syrup note threaded through the whole.  In a word: delicious.

Finish:  Good length and surprisingly smooth (I hate using that word in tasting notes, but it was) and restrained – though still assertive and characterful.  Great balance.

Comment:  Very good indeed.  A fitting replacement for the 15  year-old, if rather more muscular and full-bodied in style.

Today’s Laphroaigs seem to have rounded out some of the rougher edges of previous releases – a trend that seemed to start with the 15 year-old that this replaces.  Even the 10 year-old is more approachable nowadays than when I first tasted it in the late 1990s.  Some folk might lament this trend towards a taming of the beast, but personally I’m all for it as long as the results are as good as this.  I was also really impressed with the 25 year-old, and will post my notes on that in the next few days.

Thanks to John Campbell for coming down for the event and for bringing some fantastic whisky with him. Special thanks also to Albannach for serving up some delicious Laphroaig-themed food after the tasting.

Tim, this is good news.
Always been very fond of Laphroaig. Does that mean, that the 15 is gone?

Is it entirely bourbon matured or are there a few nuggets of sherry sloshing about in there for a change Tim? Looks lovely, I’m very glad its at 48%.

Sounds good. I love the 10yo, the CS, the QC and a 7yo unchilfiltered expression I found one day but was never a big fan of the 15yo.

I will definitely be picking up a bottle of this and hopefully will love it as much as the 7yo (my current fav Laphroaig).

Tim, nice write up, and I’ll look forward to trying this one as soon as it reaches the US.

Had a FOL email recently. Expected date for the 18yo is a few months from now.
And they have some 30 bottles of 15 yo for the Friends.
So for a few months there is quite a gap in the line-up.

There’s still bottles of 15yo available over here, bgulien. I bought three bottles as soon as I heard it was finishing, but unfortunately I’m already half-way through the first one. I need to start rationing myself a bit more, but often in the evening when I’m deciding what I want to drink the 15yo is the one that calls me 🙂

I had an order in last week and forgot to look.
So thanks for the warning. Just ordered a bottle, just in case I run out before the 18 is in. And like you, I love the 15 a lot.

Just this week, the 18 yo started selling in the Netherlands.
I immediately bought one. Didn’t open it yet.
This morning I got an email from Laphroaig, that I could order it via the FOL shop.
That’s a bit crazy isn’t it?
The guy in Amsterdam assured me that it started selling on the 27th op April, and now I can get a 18 yo because I am a “special” FOL-er.
Even Ardbeg built in some time, when they marketed the retail version of the Supernova.
The retail price I payed was EUR 71,95 ( GBP 65 I think)

Oh, and the 18 yo is still caramel coloured!
Why won’t they learn….

Oh I can’t wait to try the 18 year old….i was lucky enough to visit the distillery back in March this year with a friend of mine….we called into Laphraoig and burly Dave guided us around the place…..at the end of the tour we sat down with about 10 other Scandinavian chaps and sampled the Quarter Cask and 15 year old…..i love the Quarter Cask and would happily pay £50-60 quid for a bottle

If I can say something about Laphroaig, This is a humdinger of a whisky! Arguably the most devastating (and I mean that in a constructive manner) of the Islay peated single malts. Perhaps you’ve noticed, a lot of Isaly whiskies come in green bottles. There is in fact a reason for that. When the bottle is green, you cannot make out the color of the whisky. If you cannot see the color, you’re purchasing decision will instead be based on the label rather than the light color of the whisky in the bottle. The majority if Islay whiskies are bourbon cask matured & they are light in color. It’s a myth that the best whiskies have the darkest colors. All whiskies have magnificent ranges of flavour weather they are light or dark in color. So, never judge a whisky by it’s color!

[…] Laphroaig 18 Big thanks to the compadre who let us sample a dram from his bottle of this magical Scottish elixir. Believe us when we say this tastes like having your face shoved into a clump of wet grass—we mean that as a compliment. […]

[…] my whisky blogging brothers’ reviews at Edinburgh Whisky Blog, TWEBlog, Whisky for Everyone, and […]

Trying the 15 & 18 at home, side by side. Really going to miss the 15. 18 is certainly full bodied, as mentioned above, but just doesn’t have the smokiness, like a cigar filled room, or the 15…

Thanks for the tasting notes. I’m a MASSIVE fan of the Quarter Cask, quite easily my favourite dram and I’ve just ordered a bottle of the 18 and can’t wait for it to arrive.