We’ve spent the past year lining up great exclusive releases to appear over the coming months, and the latest bottle has just landed: a specially selected refill-sherry cask, bottled for us by the team at Gordon & MacPhail – Caol Ila 2005 15yo Cask #301507.

Gordon & MacPhail is one of Scotland’s oldest independent bottlers. It started in 1895 as a grocers in Elgin in the heart of Speyside and have been laying down stocks of great whisky ever since. It moved into the hands of the Urquhart family in 1915, and ever since they have been working to ensure that there’ll be interesting whisky in the warehouse for future generations.

The Connoisseurs Choice range (no apostrophe) appeared in 1968 and was a ground-breaking range of single malts in a sea of blended whisky. It was curated by George Urquhart, the second generation of the family to run the company, who helped lay the foundations of the Gordon & MacPhail’s incredible stocks and brought single malt to the world.

We’ve been working with G&M for years, and are very pleased that they let us have this single cask release of Caol Ila, bottled exclusively for us as part of the Connoisseurs Choice range.

The mixture of peat smoke and sherry used to be very rare in the whisky world, although the past few years have seen more casks hit the market. It’s a difficult combination to get right, but when it works it can be an excellent marriage. When a sample of this whisky landed on TWE boss Sukhinder Singh’s desk, it was an immediate yes.

Distilled at Caol Ila, the whisky was filled into cask in 2005 and bottled on 6 January 2021 at 15 years old. It spent the intervening years in a refill sherry hogshead, which is a great combination: the more subtle – but definitely still obvious – sherry influence works well with the fruity and smoky Islay spirit, complementing rather than swamping it. 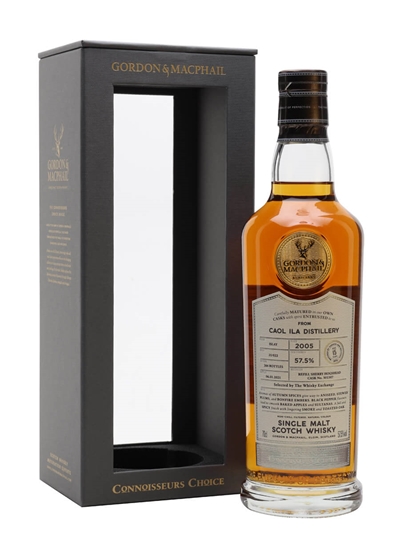 There are only 266 bottles of this Caol Ila and we’ve already opened one to taste ourselves. If you want one of the remaining 265, head to The Whisky Exchange website or drop by one of our London shops – make sure you check the opening hours before heading down and give them a ring to check they still have some bottles left.

No chance to deliver in France before the out of stock :-(? I see that some French islands can be delivered but not mainland. Thanks

We’re working on it – we don’t know when we’ll be able to deliver to France again, but it will hopefully be soon.