Home   SPIRITS & LIQUEURS   Other Spirits   What is eau-de-vie?

2 Comments on What is eau-de-vie?

One of the lesser-known spirit categories is eau-de-vie. Most people will have tried one, and often without realising as various countries’ national drinks are classified as eau-de-vie, such as raki from Turkey and European slivovitz. Here’s our guide to all you need to know, including what iT is and how to enjoy it.

Confusingly, eau-de-vie (French for ‘water of life’) is a term used in French to mean ‘spirit’. But in English-speaking countries, it refers to brandies made with fruit other than grapes. Not all will use the term on the label – common types of eau-de-vie include Romanian țuică, Obstler from Germany (schnaps – aka schnapps – is used in German in a similar way to eau-de-vie in France, referring to any type of spirit. However, when English speakers talk about schnapps they usually mean eau-de-vie), Hungarian pálinka and Ceylon Arrack from Sri Lanka.

It is made in a similar way to Cognac and other grape brandies. The method varies, but usually the fruit is pressed to extract its juice, fermented with the help of yeast (which can be either commercially produced, or by using naturally occurring strains within the fruit) to create an alcoholic liquid, and then distilling it. Eau-de-vie are usually unaged, and are usually bottled soon after production to preserve aroma and flavour.

Which producers should you look out for?

France, Germany and Austria are the spiritual homes of eau-de-vie, with G Miclo in Alsace and the top-end bottlings from Rochelt two that must be tried. Other countries have now caught on, with Jacopo Poli and Capovilla from Italy and Capreolus from England just some of our favourites.

Capreolus is made in Gloucestershire by Barney Wilczak, award-winning photographer and eau-de-vie fan. A very small operation compares to the bigger names of France and Germany, the fledgling producer is a perfect example of how labour- and time-intensive eaux-de-vie production can be. For example, in 2016 Barney made a single-tree pear eau-de-vie and one from quince. For the former, he and a couple of friends spent a day collecting pears from an 8m tree using a windsock and a hook from a paint roller. The yield was 290kg of fruit, which was only enough for 41 37.5cl bottles. For the quince version, it took a total of 42 man hours to hand-wash 79,000 quinces (the fruit has fluff on the skin which gives unwanted flavours when distilled), producing 107 half bottles of eau-de-vie. 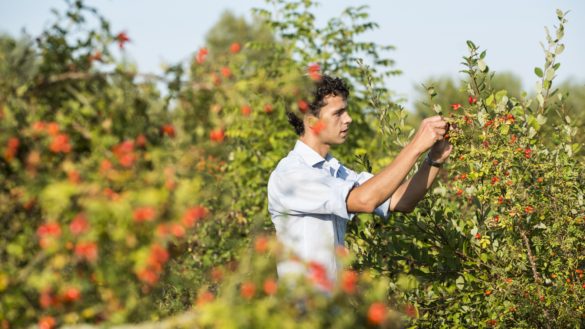 Barney Wilczak of Capreolus picking fruit for his eau-de-vie.

How should you drink it?

Traditionally, it is served neat as an after-dinner digestif. As with wine, serving it too cold will remove all the flavour, so it should either be popped in the fridge for a short time, or served at room temperature. A few drops of water will help to bring out the fruitiness and remove some of the spirituous nature – due to the lack of ageing and natural fruit acidity – of the eau-de-vie.

I’m a big fan of eaux-de-vie, having enjoyed many excellent examples during my holidays in Germany. You’ll find weird and wonderful flavours such as asparagus or holly, but if you’re new to the category, I’d recommend starting with your favourite fruit – we almost certainly have the one for you on our eau-de-vie page.

As a Germany national, I can’t resist to make a hair splitting comment on the WHAT IS IT? section:

You write: common types of eau-de-vie include … schnapps from Germany …

In Germany, Schnaps (yes, one p only) refers to any spirit drink including whisky, brandy… anything. The correct term for an eau-de-vie is ‘Obstler’, from the German word ‘Obst’ = fruit.

Thatnks Juergen – I’ve updated the page to make things a bit more precise. Strangely, schnapps seems to now be a fairly common English word that means about the same as Obstler 🙂