It’s agreed that whisky gets much of its flavour from the wood it’s aged in. Many different types are used, but what do they add? This was the subject of a recent shop tasting hosted by senior assistant manager Chris Bolton. Here the key points about whisky maturation: 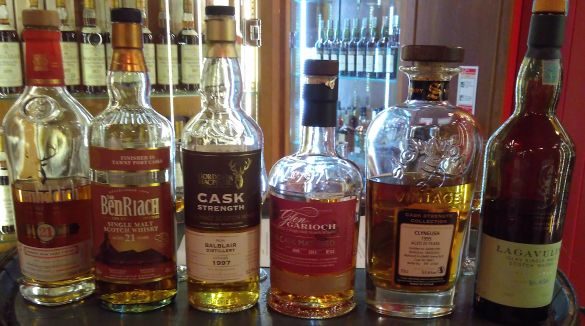 We tasted six whiskies, each aged in a different type of cask

Bourbon barrels are the most common cask used for Scotch whisky. Why? It’s all down to supply and demand. By law bourbon must be aged in new casks, meaning that after their first use they are generally surplus to requirements. They are also cheap compared with other types of cask, which leads to high demand from Scotland (and other distilleries around the world). The example used for the tasting was our exclusive Balblair 1997 from Gordon & MacPhail, which showed the classic sweet, fruity style that bourbon casks impart along with the trademark notes of coconut and vanilla.

Sherry casks (usually around 500 litres) are very popular, but are very expensive (up to 10 times the cost of a bourbon barrel), so many distilleries choose not to (or cannot afford to) use them on a regular basis. Casks used for all the main styles of sherry are used for ageing whisky, with the sweet Pedro Ximénez and rich oloroso the most common. We tried two sherried whiskies on the night: a refill butt from Signatory of Clynelish 1995 and Lagavulin 1995 Distillers Edition, which is finished in Pedro Ximénez (PX) sherry casks. Theses added notes of chocolate, orange and dried fruits, with the smokiness of the Lagavulin adding an extra dimension.

The most common port casks used for whisky used to hold ruby port, although tawny or white are also used, the latter adding both richness and a refreshing dryness. Casks used for the red styles of port add notes of strawberry and raspberry. The example we tried was Benriach 21 Year Old Tawny Port Finish, from one of Chris’ favourite distilleries. It showed wonderful balance between dry spicy flavours – clove and nutmeg – and red fruits.

A lesser-seen type (and very rarely seen for full maturation), rum casks add a whack of tropical fruit and lots of sweetness to whisky. We were treated to Glenfiddich 21 Year Old, finished for around four months. This has proved a very popular release since its relaunch at the start of the decade, and with exceptional complexity and enticing notes of green apple, pear, mango, fudge and crème brûlée, it’s easy to see why.

Wine casks vary from dry to sweet, with both red and white used. Sauternes casks add sweetness and notes honeyed fruit, whereas dry white wine, especially Chardonnay casks, will add butteriness and a mouth-coating texture. Due to the tannin in red wine, these casks impart dryness and fruity notes. We tasted Glen Garioch 1998, aged for 15 years in red-Bordeaux casks. This displayed lovely integration between the red fruit (cherry and strawberry) and dry, earthy, smoke, with an underlying notes of grape. 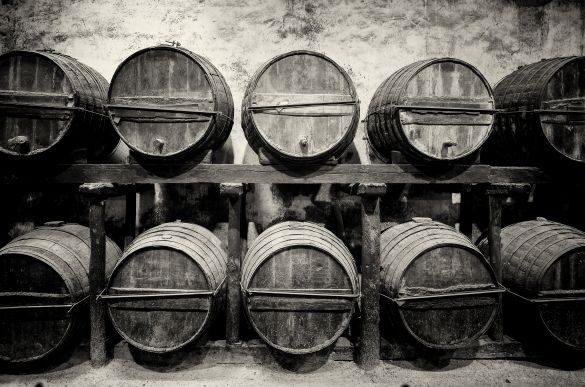 Other casks USED TO AGE WHISKY

A fortified wine from the eponymous island, these casks add extra spice and dark-fruit notes, along with dryness or sweetness depending on the style of Madeira. This year has seen a prominent release with the eighth edition of Glenmorangie’s Private Edition series: Bacalta, which was finished in sweet Malmsey Madeira casks.

Ongoing releases of Marsala-matured whiskies are rare, in fact we only have one in stock, the limited-edition Ledaig 19 Year Old. This rich, fortified wine from Sicily can be dry or sweet, in both cases adding extra complexity and extra spice.

Very seldom used for full maturation, as it imparts powerful, spicy flavours which can overwhelm the spirit, it is useful for finishing, where the extra toast can add a layer of complexity, especially to longer-aged whiskies. An example of this is the newly release Bladnoch Talia 25 Year Old.

One of the rarer cask types, Cognac casks are made from French Limouisin oak and add aromatics and perfumed fruit. One example of this is Bruichladdich’s excellent Cuvée 640 Eroica.

Many other cask types are used for ageing whisky. Some of them work – the recently launched Glenfiddich Experimental Series IPA Cask was finished in beer casks, resulting in a deliciously floral and fruity whisky – and some should never be tried again. I like a salty tang to my whisky, but Fishky, finished in herring casks, was the worst whisky I’ve ever tasted! Why not try a range of whiskies aged in different casks for yourself and see which style suits you?

[…] week, we looked at the most common ways of maturing whisky, but this new project features cask types rarely seen: French chestnut, virgin Spanish oak and […]

[…] cask used has a big effect on the final whisky. The size, age and number of times it has been used are all factors. A first-fill cask will impart […]