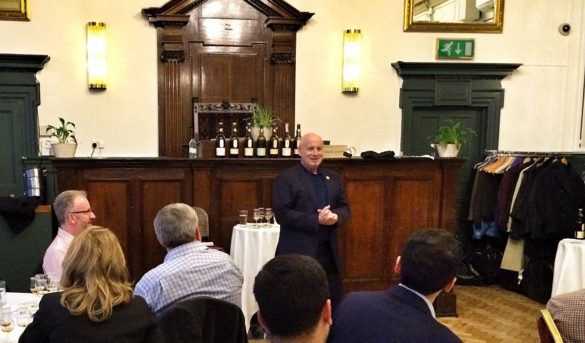 ‘Islay is the eighth wonder of the world’

Colin Dunn knows how to open a whisky tasting. While invoking wonder-dom for Islay may seem hyperbolic, there are some tasting line-ups that justify such comments – our Lagavulin 200th Anniversary tasting was certainly one of those.

While Lagavulin is hugely popular among whisky aficionados, there are surprisingly few expressions available on the market. The core range consist of just two whiskies – Lagavulin 16 Year Old and Lagavulin Distillers Edition. Add to that the yearly 12-year-old Special Release and you’ve still only got three whiskies. Our original plan of putting together a line-up of six distillery bottlings is an impressive feat, but on the night we went one better… 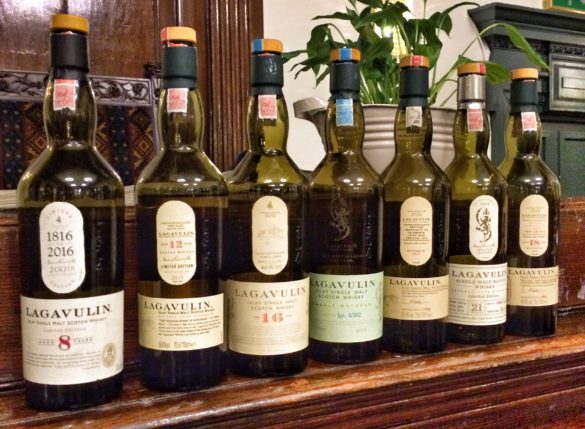 We kicked off the evening with the 2015 edition of the Lagavulin 12 Year Old. It’s a cask-strength monster of a whisky that you wouldn’t normally start proceedings with, but Colin was adamant – ‘The best whisky to start with is the one you shouldn’t!’ It’s a punchy dram and woke up the room.

Along with the regular whisky range, the line-up also included three special editions: the 200th Anniversary 8-year-old (you can read Stu’s take on it here), the sold-out 2015 Islay Jazz Festival bottling and, the whisky I was most looking forward to, the Lagavulin 1991 21yo Sherry Cask. I was lucky enough to taste it when it was released as part of the 2012 Diageo Special Releases, and have been trying to find an excuse to do so again ever since. My palate’s got a lot more sophisticated over the past four years, so here are my updated tasting notes:

Comment: Fruitier than I remember, especially on the nose, but just as elegant and poised. A classic.

While the 1991 was the billed highlight of the evening, Colin had one more trick up his sleeve – the recently launched and much-spoken-about Lagavulin 18 Year Old, bottled specially for this year’s Islay Festival and only available from the distillery. It’s almost certainly sold out by now, with only a handful of bottles still available at the distillery at the time of the tasting, and Colin sneaked this bottle off the island so that we could have a taste.

Comment: A soft and fruity whisky, with well-integrated smoke. It’s my favourite style and I’m now even more sad that I didn’t make it to Islay this year. Now to make friends with people who did…

For the full rundown on the evening, head to Storify, where you can see all the tweets from the night.

not a bad lineup this one…

[…] Lagavulin’s 200th anniversary (as we have mentioned several times – birthday tasting, Lagavulin 8yo) and they’re bringing the party to The Whisky Show. They’ve had a few […]