We always look forward to new releases from Speciality Drinks Ltd. As a sister company of The Whisky Exchange, we hear whispers of what’s coming next and get an occasional taste, and we’ve been eagerly awaiting this latest launch – four new releases in the Port Askaig range of single malts.

Port Askaig. The petrol pump is out of shot behind the trees on the left…

Rather than a distillery, Port Askaig is one of the two main ports on Islay, and if you’ve visited the island by ferry, there’s a 50/50 chance that you’ve been there. It’s not a heaving metropolis, with a small ferry terminal, a pub, a shop and a single petrol pump. As one of the entry points to the island, it’s a perfect name for an Islay whisky. Especially as the other port is Port Ellen, a name which has already been taken…

They don’t reveal which distilleries the whiskies are from, although theories have been wafting around the internet since the range first appeared in 2009. However, at the launch tasting at TWE London Bridge this week, Speciality Drinks King of Casks Oliver Chilton dropped a minor bombshell – including the latest releases, there are now whiskies from three different distilleries in the range. 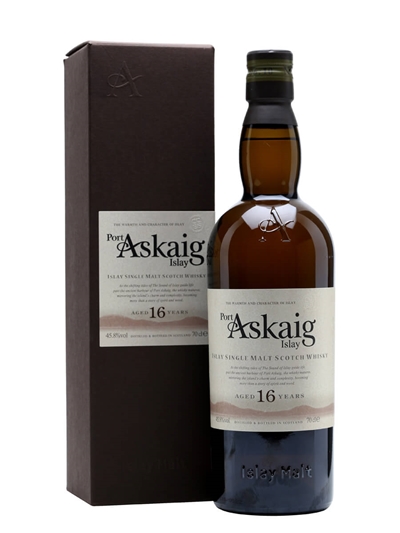 First up is a replacement for Port Askaig 15 Years Old. Many of the whiskies in the PA line-up are bottled in small batches, and the 15 is one of them. Now that it’s running low (stock up now, 15yo fans), they’ve put together another batch of whisky distilled around the same time. It’s still a mixture of ex-sherry and ex-bourbon casks, but now a year older.

This is a big, bold and peaty dram, delivering the classic balance of flavours Port Askaig has become known for. 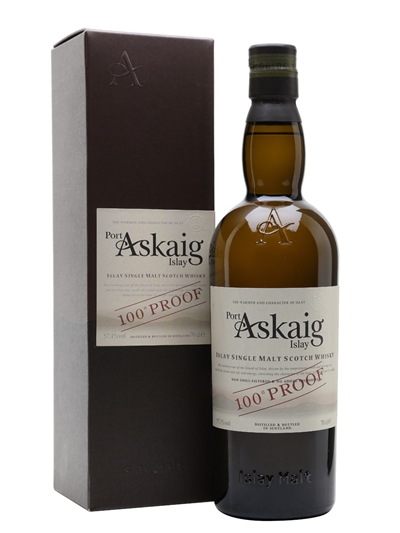 Next we have something different: an ongoing bottling. Getting a guaranteed supply of smoky Islay whisky is hard. With the popularity of peat going through the roof, everyone’s after smoky whisky and there’s not enough to go around. Fortunately, the Speciality Drinks team have done the impossible, and will be able to continue to produce the new 100° Proof for the foreseeable future.

Bottled at a punchy 57.1% ABV (100° proof in the old system of measurement) it’s something that you don’t see often – high-strength, smoky whisky from Islay at less than £50. We approve.

Fresh and vibrant, delivering peat reek and citrus on the palate which stay with you into the finish. 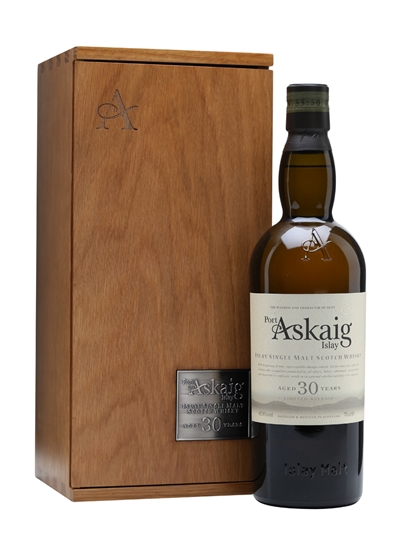 The third of the new releases is another replacement, although keeping the same age statement – a new 30-year-old Port Askaig. This new batch was vatted from only three casks, selected to have some oomph, despite having been maturing for 30 years. Ollie and the team have chosen well, with more smoke than you often find in Islay whisky of this age, but with the elegance and refinement that you would hope for.

Matured for more than 30 years in American oak casks, much of the heavy smoke and medicinal notes has been softened and complemented with honeysuckle and autumn fruit.

Freshly baked banana bread and sticky liquorice sweets create a moreish dram to be savoured late in the evening. 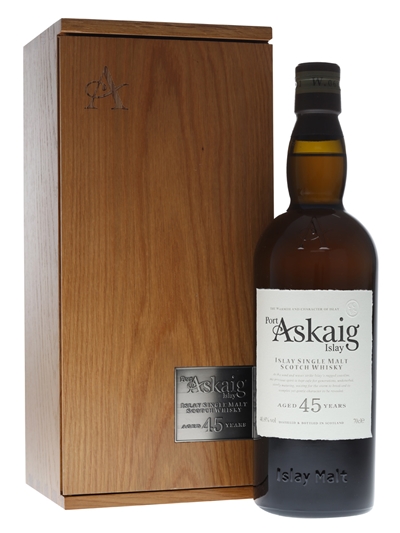 The final new release is something very special – Port Askaig 45 Years Old. You rarely see Islay whisky this old, and the Speciality Drinks team were very pleased to find the casks, hidden away for a special occasion. It started out as five sherry butts, which had lost a lot of spirit to the angels over the years. These were reracked into just three of the casks, and then married for a year before bottling. The result was worth the wait.

Even before you taste this, your senses are filled with full, thick, ripe fruit and heavy, sweet, sticky nectar. A touch of menthol gives a clue to long ageing of this whisky.

Rich Navel oranges and fleshy mango sit on a thick and warming palate, with flavours reminiscent of green tea, mint leaves and tropical fruit. The flavours are incredibly well balanced with elegance and poise.

The finish is clean and long with carefully balanced minerality.

You can find all of these as well as the rest of the Port Askaig range over on the Whisky Exchange website. Speciality Drinks will also be presenting all of the whiskies, including the four newbies, at The Whisky Show in a couple of weeks – if you’re coming along, pop by and say hello to Oliver. Make sure to tell him your theories about which distilleries the whiskies are from, he loves that…

Why do whisky marketing teams keep putting out all this noise to consumers about how “age doesn’t matter” when it’s pretty obvious that their own distillers haven’t got the memo and keep aging whisky for decades – and losing gallons to angel’s share in the process – for no discernible reason because, after all, “young whisky is so damned good/vibrant/flavour-led… uh, currently available in large quantities for neophyte purchase/consumption”? Do the distillers, who actually make whisky, know something the marketers don’t, or does the relevance of age REALLY just depend on whether you acknowledge it on the label? If so, maybe we could all just “deny gravity” and save tons on airfare.

The whisky experts who keep ignoring the glaring logical inconsistencies associated with NAS do so at growing cost to their own credibility. The people you’re actually fooling in trying to help the industry sell its silliness is a much smaller group than the one you think you’re fooling – and weathermen who can’t tell if it’s currently raining simply aren’t trusted to discuss more complex climate issues. If you really don’t know if age matters to whisky development because it’s something that industry hacks say, and want you to say – but only part of the time – who really cares if you “detect mango”?

[…] is the usual suspect, but including the latest Port Askaig-releases, there are now whiskies from three different distilleries in the range. So there’s no way to really […]

[…] from Caol Ila has led to theories being bandied around the internet for years. However, Ollie has recently revealed that at least three distilleries are currently represented in the range, so things are much murkier […]