Home   In Their Own Words   In their own words – George Grant, Director of Sales, Glenfarclas

In their own words – George Grant, Director of Sales, Glenfarclas

9 Comments on In their own words – George Grant, Director of Sales, Glenfarclas

Glenfarclas is a rare example of a Scottish distillery that is still in independent hands. I sat down with director of sales, George Grant, as the distillery celebrated 150 years of Grant family ownership. 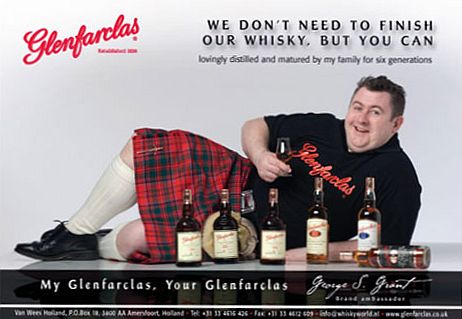 ‘The big advantage to being family owned is that you have one person to ask the questions to and you can get an answer immediately. The negatives are you don’t have that team behind you, or that massive marketing budget.’

‘Being traditional leads to more innovation, we look at things on a longer-term basis, we’re very anti-finishing, but we still use other casks: port, Cognac, fino – there’s lots of different things we have done, and we’re still doing. We’ve just filled lots more quarter casks for the future. It is very long term.’

‘If we run out of one our age-statement bottlings, we pull it from the market until stocks get old enough again. There’s a lot of NAS whisky out there, but we would rather keep an age on the bottle.’

‘I drink beer during long tastings in Germany. People laugh at me, but I tell them if I drank the 12 whiskies I wouldn’t be able to stand and keep talking!’

‘The best thing about being a whisky drinker is you know what you’re going to get for birthdays, Christmas and Father’s Day.’

‘The non-Glenfarclas whisky I drink the most of is Johnnie Walker Black Label. It’s everywhere and you know exactly what you’re getting.’

‘Maltings are a bit like restaurants. If you ask for a medium steak and it arrives well done, you send it back. If you burn your steak at home, you just eat it. It’s best to use barley from someone who malts full time!’

‘If we need space, we just build another building. You have to consult any neighbours within a couple of miles, but we own all the buildings for three-and-a-half miles in all directions.’

‘The slowdown in blended whisky sales means some distilleries are down to five-day working (a reduction of 20% in production), which will have a big effect in output in the next 10-20 years.’

‘Germany is our biggest market and I enjoy going there to talk about whisky. You do a tasting in the UK, you have an hour; it’s 30 minutes in the USA. You do it in Germany and they expect a five-hour tasting! It’s very rewarding as they’ll all end up buying a bottle and they have so many questions, the audience really get involved.’

‘People are realising there’s an awful lot of good whisky out there that is 10, 15 or 20 years old. For a long time, people thought: “older, older, older” and we’ve had a generation that haven’t fully appreciated younger whiskies. I think people are going back to basics.’

‘The new 40 Year Old will be very limited. I wanted to do it at 46%, but sadly the cask strength was lower than that, so we’ll have to release it at 43%. There was no conspiracy to lower the strength.’

‘If we had an offer to sell, we wouldn’t. If you were losing money, you’d just stop producing to reduce costs and sell the 60 years’ worth of stock.’

Posted in In Their Own Words, Scotch Whisky, WHISKY & WHISKEY
Tagged Glenfarclas

#Whisky In their own words – George Grant, Director of Sales, Glenfarclas: Glenfarclas is a rare example of a … http://t.co/O5IXyS29fe

In their own words – George Grant, Director of Sales, Glenfarclas: http://t.co/YBXdUhpBfd via @whiskyexchange

In their own words – George Grant, Director of Sales, Glenfarclas http://t.co/5BHkOlTexS http://t.co/gs11Gnefuh