The Singleton is a worldwide phenomenon, hiding whisky from three different distilleries under one brand, with each appearing in different countries around the world. In the UK all of the readily available Singleton whisky comes from one place: the Dufftown distillery. The 12, 15 and 18 year old expressions have been around for a few years and have become well known, partly through their presence in travel retail, but a pair of new releases have recently appeared on the shelves at TWE: Singleton Sunray and Tailfire.

Given the brief of creating something new for the Singleton range, Diageo’s product development group started as they usually do – they sat down to have a chat. Matthew Crow, part of the team behind the new whiskies, told us at the launch that they started by focusing on the key aspects that they look for in Dufftown’s whisky, and isolated two terms: intensity and vibrancy. These are often used interchangeably, but Matthew and the rest of the team came up with more specific meanings:

From there they looked for the specific flavours within the spirit that tripped those ideas for them, and then (after much experimentation) came up with the two new whiskies, each showing off one of those sides of Dufftown.

The Sunray’s focus is ‘intensity’. The blending team chose Dufftown’s sweet and honeyed side for the whisky, and used ex-bourbon cask matured spirit, looking for a mellow richness with sweetness and a bit of depth.

Palate: Sweet and soft, with a gently oily mouthfeel. Lemon and cream leads into spicy cinnamon and nutmeg, with sharp apple developing. Behind that are some bitter woody notes balanced by butter toffee that still leaves sour apple around the edges.

Finish: Butter toffee and fudge fade to lemon and spicy wood, with a hint of menthol.

Comments: It does what it sets out to do – it’s a no-nonsense bourbon matured whisky, which emphasises the honey and nutty notes of Dufftown, with a bit of citrus and spice thrown in for added interest. It does well, ‘blasphemy’ though it is to say, with a cube of ice…

The Tailfire takes on the ‘vibrancy’ facet of Dufftown’s whisky, and does so by going for more fruity flavours. Specifically, they’ve focused on the berry notes that are found in the distillery’s new make and emphasised by maturation in sherry casks. Using extra sherry matured spirit in the mix creates something quite different to the previously released Dufftown Singletons.

Nose: Walnuts and hazelnuts to start, with glacé cherries and dried fruit coming in behind. The darker notes are balanced by vanilla, white grapes, spicy sponge cake and some sultanas, as well as a touch of cheese-rind savouriness.

Palate: Lots of nuts and spice off the bat, with sour wood touches, rich berry fruit and dark, sticky liquorice. It continues to develop darker flavours – damp leaves, tobacco and leathery notes – as well as a touch of grassiness.

Comment: Definitely different to the lighter style of the rest of the Singleton of Dufftown range, even the older bottlings which bring also containing more sherry cask matured whisky. It’s still got the Dufftown sweetness and nuttiness, but with a layer of darker, sherry-cask-inspired flavour.

To support the launch of the whiskies, Diageo is throwing a bit of a do on the South Bank in London on 15 May – The Singleton Whisky Night Market (tickets on sale now!). They are not only matching the whisky with food, both sweet and savoury, but also doing something often frowned upon – making cocktails.

I’m a big fan of using single malt in cocktails (if it’s done appropriately) and my first post on the blog was even about doing so. It’s all about choosing your ingredients correctly, and Diageo cocktail maestro Andrea Montague, formerly of excellent London bar Callooh Callay, has put together a couple of drinks to complement the Sunray and Tailfire.

I tried the cocktails at the launch and wasn’t that big a fan of the Tailfire’s Fruity Scot, as the whisky was a bit swamped by the combination of lemon juice, crème de mûre and white grape juice. However, the Sunray’s cocktail was a hit for me: 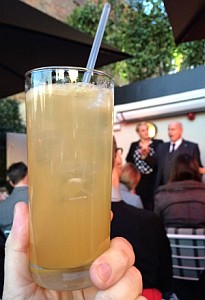 Complete with Andrea and a proselytising Colin Dunn

Stir the still ingredients with ice, top up with soda water and serve ungarnished.

It’s a long drink, so everything’s dialled back a bit, but the whisky still shines through, with the mead and lemon juice bolstering the honey and citrus notes in the whisky. It’s a technique of cocktail making that I rather like, emphasising the flavours of the core spirit rather than masking them.

Both the Sunray and Tailfire are solid additions to the Singleton of Dufftown range, with different directions and flavours from each, while still maintaining a distinctive Dufftown-ness. The Tailfire seemed to go down the best at the launch, but for me it’s the Sunray, which I suspect may make an appearance in my glass over the summer. Probably with some ice in…

Singleton Sunray and Tailfire – Dufftown’s latest – The Singleton is a worldwide phenomenon, hiding whisky from… http://t.co/MT98kvVO5P

[…] in 2014, two new expressions joined The Singleton of Dufftown range – Sunray and Tailfire. They didn’t seem to make much of an impression, despite some solid attempts at marketing (I […]