The folks at Balvenie like keeping busy. After a summer of random events they’ve hunkered down as we approach the end of the year and have done that which we know them for most – made some excellent whisky. Not sticking with just one dram to tempt us with over the Christmas period they’ve produced two, both long awaited by Balvenie fans and both 2nd editions – Tun 1401 Batch 2 and 40 year old Batch 2. 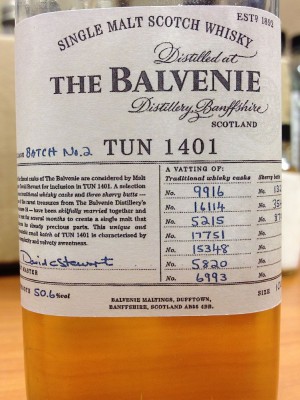 First up, we have the Tun 1401, named for Balvenie Malt Master David Stewart’s favourite marrying vat. It’s a combination of 10 casks – 7 bourbon and 3 sherry – with the vintages bookended by a 1967 and a 1989, the other eight casks coming from the 70s with a lean towards the earlier part of the decade. It’s been a long time in arriving, first announced by ever-reliable Whisky Magazine as being released in May but not actually hitting the shelves until early November (well, we’re still waiting for it anyway…). It’s a continuation of the idea started with the incredibly popular and long sold out distillery-only first edition, and the plan this time is to get it out to the wider world, wheretofore there are two new versions – batch 2 for Europe and batch 3 for the USA. They’re similar in character and make-up, but 20 casks worth of whisky goes a bit further than 10…

We’ll have batch 2 up on the site shortly and to celebrate its release the people behind the @TheBalvenieUK Twitter account sent out instructions and a bunch of samples to the great and good of the online whisky world, and also organised a bit of an in-real-life tasting party at Albannach on Leicester Square. The Twitter-side of the evening combined a tasting of the finished whisky with a try of the components, with each online participant receiving a sample from one of the 10 casks. While I am still but a tiny child in the world of whisky [Billy, you’re not a ‘tiny’ anything – Ed.] , the blogging powerhouse that is Mr Tim Forbes was, of course, invited to take part. He kindly doshed me a splash of the 1401, so here’s some tasting notes from us both:

Palate: Soft honey with caramel edges, sandalwood, spiced apple, a burst of orange peel on the swallow and a hint of woody pot pourri at the end. Water amplifies the wood and rolls off a bit of the fruit.

Finish: Long, warm & tingly, with a dry nuttiness creeping in.

[Update: The Tun 1401 is now in stock – over here]
[Another update: it sold out. Our allocation went in an afternoon…] 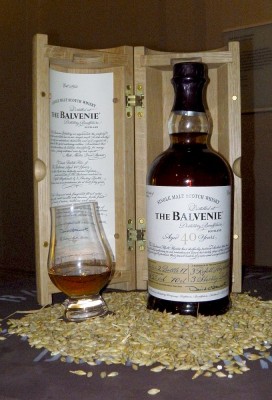 Balvenie 40 - any chance they get to throw some malt around...

Next up was something a bit special, Balvenie’s new 40 year old. There are only 150 bottles available of this top-of-their-line whisky, with only 18 allocated to the UK (2 of which we drank during the launch event). David Stewart was yet again behind this, selecting 6 casks from 1970, 3 sherry and 3 bourbon, to use to build the whisky. If six 40 year old casks only yielded 150 bottles it would be a sign of some very hungry angels and David didn’t use the entire contents of the casks. In the end the finished product is about 2/3rds sherry matured and 1/3rd bourbon matured whisky, and is bottled at a full proof of 48.5%.

I went along to their launch event at the Victoria & Albert museum, tying in with the current Power of Making exhibition celebrating the 40th anniversary of the UK Craft Council. With Balvenie’s obsession with craft (both at the distillery and as a marketing tool) this was a fairly good combination, and the atrium of the museum is a rather shiny place to do a launch. After an intro from Dr Andrew Forrester, UK brand ambassador and the more serious half of the Two Doctors combo who led our recent Balvenie tasting, and Rosy Greenlees, executive director of the Craft Council, we got stuck into the whisky:

Palate: Creamy vanilla, lemon zest and excellently balanced spicy wood: Cinnamon and nutmeg laced eggnog? Lemon egg custard tarts? A turn towards a tannic edge as you swallow, along with some old cognac rancio, with autumnal forests and damp wood.

Finish: Sugared raisins, sherbert, liquorice root, a lingering sweetness and a hint of minerality as it fades

Comments: Surprisingly fresh for such an old whisky, with a nice balance between sherry and bourbon. They could have gone down the more common route of bringing out a sherried beast, but instead have stuck to the distillery character and built the sherry around a honeyed bourbon cask centre. Good work, Mr Stewart.

Further emphasising the ‘we love craft’ message, each bottle is packaged in a wooden box hand made by Scottish furniture maker Sam Chinnery and then engraved by his father. It’ll hit the market at about £2500 and we have a bottle.

Edit: We had a bottle.  Someone’s already bought it.  We’re trying to get another. Let us know if you want one.

BTW, due to creative differences here at TWE Blog, let’s have a poll.  What colour do you think our editorial italics should be in?  Vote now!

Very nice. I had the plaeasure of tasting tun 1401 Batch 2, and it’s a stunning whisky. that session of deconstruction was very nice, althiough i only was a viewer and did not take part.
i have batch #3 (US only) waiting for me to taste it, and i have very high ecpectations as batch #2 is one of the best i’ve had recently.

[…] on the general age range of the component casks of only the early releases–with Batch 2 said to have only one cask filled later than the 1970s and one filled in 1967. I’ve no idea if […]

[…] special: the latest batch of Balvenie 40 Year Old. I went to the launch of the second batch three years ago and in the meantime they’ve sold enough batches – at least seven by our count – that […]