8 Comments on A trip to Knockdhu

[This is Part 4 of Billy’s trip around the Inver House distilleries.  If you haven’t already, you should check out his scribblings from Balblair, Pulteney and Speyburn] 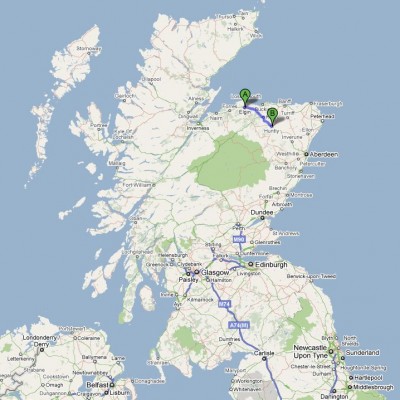 After leaving Speyburn we hacked back over to Elgin to find our hotel, not knowing what to expect – the usual hotel that the International Beverages folk use was booked up due to some people turning up nearby to hit balls around with sticks and this new one was untested. Its location, behind Tesco, didn’t at first encourage us, but as we pulled into the drive we found our expectations smashed – it was a nice looking country house.

We checked in, retired to our rooms and then met downstairs in the bar for a pre-dinner amenities comparison: I thought I was doing pretty well with my four poster bed, bathroom the size of my flat at home and selection of sofas, but Mark had a door that opened onto the gardens and nearby River Lossie and we were both beaten by one of the Scandinavian contingent who had two four poster beds. That crosses a line into the downright unnecessary. Dinner was an affair fraught with returned meals and sarcastic waiting staff, but the bar was full of drams and a few of those liberally ended the evening. The next morning we stopped at the Gordon & Macphail store for a quick pilgrimage (they even opened up the whisky section for us to have a browse – Scottish licensing law forbids alcohol sale before 10am so there was no buying) before zipping across the countryside to the last stop on our trip – Knockdhu. 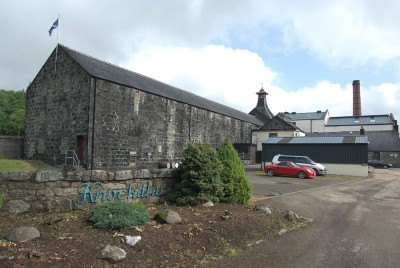 Knockdhu is the smallest distillery in the Inver House group and was founded in 1893, deliberately located both near the local train route and the four small springs that are used for water supply (along with a nearby burn for cooling water). The distillery is named for the nearby hill, Knock Dhu – the Black Hill, and is nicknamed ‘The Knock’. Despite that, it doesn’t bottle its whisky under the distillery name, using anCnoc (The Hill) instead. This started in 1993 to stop confusion of its bottlings with Knockando, a Diageo distillery situated about 30 miles to the west who got their single malt on the shelves first, and it’s one of (if not the) only distilleries to bottle solely under a different name. 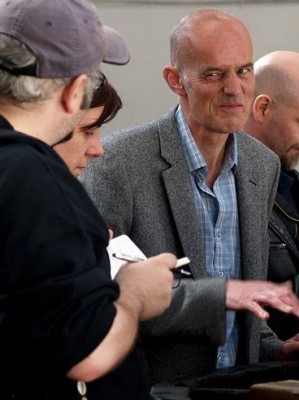 Gordon's not sure about the idiot in the hat...(Piccy by Lukas Dynowiak)

The distillery manager is Gordon Bruce, the quietest spoken and most sweary of the managers we met on our trip. He started in the industry in 1988 as a mash man at Pulteney, moving on to be assistant manager there and at Balblair before becoming manager at The Knock in 2006.

In comparison to Speyburn it’s a very traditional distillery, with little automation, but they still manage to run with just one operator thanks to Gordon’s approach to fixing problems – they knocked a hole in the wall between the mash house and still room to allow the operator to wander back and forth without having to walk around the outside…

Like most distilleries they used to malt some of their own barley (although not much and they would probably have had to buy in malt to meet their needs as well), but the maltings closed down in 1967 and their kiln hasn’t been used since, other than as a storage location upstairs (with the grill flooring providing a slightly worrying experience for an occasional acrophobe like myself) and as a visitors centre downstairs. The distillery doesn’t yet run regular tours, although if you give them a call they’ll sort something out, but Gordon and the other staff have been slowly building their visitors centre from the various bits of random equipment and history they’ve found in the dark corners of the distillery buildings. At the moment they’ve got an interesting stack of bits and pieces including their old heat exchanger, some whisky dogs (for dipping and thieving a bit of whisky), old stencils and a winnowing machine. The kiln itself is still also in place, but hasn’t been fired up since a recent visit from a group of South Africans in the middle of Scottish winter, South African summertime – they set a fire to try and give them at least one place on their trip a more similar temperature to home.

Knockdhu’s production is fairly standard, with 8 members of staff (plus 2 dogs) helping the distillery run a seven day production cycle since 2006. Levels of production have been increasing each year, with 1.6 million litres of alcohol produced last year, and 1.7 million predicted for this year. Their whisky is traditionally unpeated, but due to the demand for peated whisky by the International Beverages blends they also run through about 1500 tonnes per year of 45-48ppm peated malt, although this year they only did 1000 tonnes due to Balblair taking some of the workload – at about 5 tonnes per mash and ~410 litres/tonne that’s quite a lot of peaty spirit. 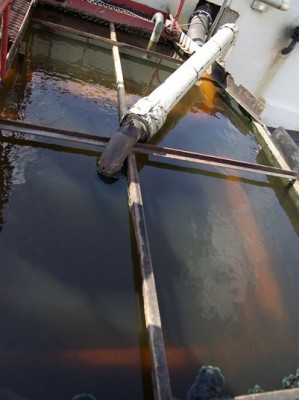 Regular production starts with Inver House’s standard deep bedded mash in a steel lined semi-lauter mash-tun for about 8 hrs. The wort is fermented for 52-58 hrs in oregon pine washbacks before distillation to about 69% ABV. Knockdhu uses a worm tub to cool the spirit vapours and, uniquely, only has one tub – both the spirit and wash still worm tubes sit next to each other in the same huge cast-iron container.

Once distilled, the spirit is either tankered away to Inver House’s Airdrie facility or filled into a mix of bourbon and sherry casks for maturation on site and eventual release as anCnoc single malt. They used to have three warehouses for cask storage but in January 2010 the year’s heavy snow collapsed two of them. Fortunately they only lost 18 casks in the collapse, but the warehouses were 115 years old and since they were cleared away the ground has sat empty, apart from a few piles of rubble. However, it seems that Gordon’s wrangling with the local council has almost borne fruit and they will shortly be starting to build replacements – Gordon wants stained glass windows, but even with International Beverages’ investment in their distilleries, I suspect that might be a hard sell.

After our wander around we retired to the distillery office where a large amount of barley laden Scotch broth was quaffed and a range of whisky appeared. Gordon poured about a dozen samples and my notebook got a bit forgotten as we passed them around, but here’s the little that I managed to write down:

11 year old, first fill bourbon cask sample
Nose: Aniseed balls, cream and grain.
Palate: More aniseed balls, cream, porridge oats.
Finish: Fizzy fruit sweets and…aniseed balls.
Comments: Luckily I like aniseed or this wouldn’t have been as much of a favourite as it was. ‘Weetabix and aniseed balls’ is what I’d call this if I was bottling it for the SMWS…

anCnoc 16 year old
Nose: Apples and custard
Palate: Sweet and buttery start, green apples and fresh apricots
Finish: Digestive biscuits and vanilla – long and sweet
Comments: The only one from the production range that I tried and one that I rather liked. A solidly fruity Speyside.

I also got to have a taste of the upcoming 35 year old, which the Scandinavian contingent were especially excited about, anCnoc being a rather big brand up in the chilly north, and it very much reminded me of the 16 year old, but more so. More spice, more vanilla and a touch more sourness from the wood as it finished. Definitely one to keep an eye out for when it appears, hopefully this year.

We then bundled back into the van for the last time and with a quick wave headed off to Aberdeen airport to fly back home. The duty free shop at the airport is quite excellent, with a big range of whisky, and I had a rather long chat with one of the staff, who had been a Seagrams rep in ye olden dayes before moving on to pacing the airport shop floor – Uncle Billy thoroughly recommends a visit. I only wish that I had a bit more time to check out the ground-side bar – last time I visited they had a range of Orkney ales on, which is a rather excellent thing to see in the usually hateful environment of an airport. 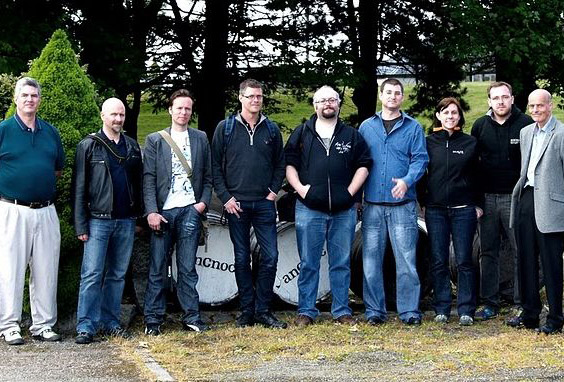 Anyways, thanks again to Cathy and Lukas for looking after us on the trip and to International Beverages and Inver House for letting them arrange the trip and look after us. If you’re up in Scotland and are looking for a distillery to visit I thoroughly recommend them all – make sure you call ahead first for Balblair, Speyburn or Knockdhu as they don’t have scheduled tours, but can normally find someone who’d rather be showing off the distillery than sitting at a desk.

Mark has his NSFW interview with Gordon up in WhiskyCast #324 and also has an episode of WhiskyCast HD that he filmed while we were visiting, showing off some of the bits of equipment and history that Gordon’s been picking up for the visitors centre.

There are, yet again, a bunch more photos over on our flickr page.

Great post, Billy…and thanks for the links. If you need a photo of the gardens outside my room in Elgin, let me know! 😉

Wonderful.
again reminds me i need to write my notes on this one too. I SO SO want to be there now.
Israel is so hot and so UN-green. Speyside, mon amour!

But also a nice review about Knockdhu

Interesting blog – although any hotel room in Elgin that opens out onto the river Spey must surely hold some kind of Guinness record for the world’s largest room?!!?

A bit of fail on my part there – my geography is even poorer than I thought. It is, of course, the River Lossie that flows through Elgin. I’ve updated the post…

[…] rather excited to hear that he was teaming up with anCnoc (the whisky distilled at Knockdhu, which I visited a couple of years back) to produce a set of limited editions with his artwork on the […]

[…] I visited Knockdhu a couple of years ago they were using barley peated to 45-48ppm, about the same as Ardbeg, but these new whiskies […]

[…] I visited a few years back, the first thing I noticed was the clash between the approach at the distillery and the more modern […]