It’s fair to say that I’ve had a good week.

On Monday I was lucky enough to attend a fantastic Compass Box tasting at TWE Vinopolis, hosted by head honcho John Glaser, who took the rapt crowd through seven of his superb creations over the last decade.  It seems rude to pick a favourite from the fantastic line-up, but the Hedonism Maximus just edged it for me – yes, it’s a bit pricey, but it’s also probably the most perfectly-balanced grain whisky I’ve ever tasted.  A really exquisite dram. 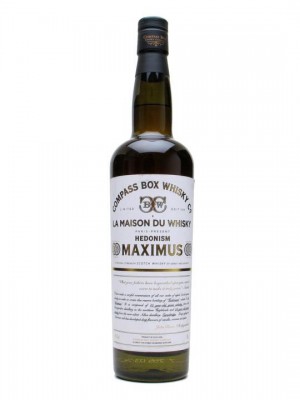 The rest of the week has been equally exciting.  My brother-in-law passed his driving test, which means I’ll be seeing a bit more of Violet, my lovely new niece;  I got invited up to Speyside in April to visit some distilleries during the Spirit of Speyside festival, and fortuitously this year the festival is on the same weekend that a certain heir to the throne marries his consort – meaning I won’t have to watch it as I’ll be in Scotland where nobody cares!

The best moment of the week, though, was on Thursday when I received an email inviting me to join the judging panel for the final session of the World Whisky Awards next week on the eve of Whisky Live!  Truly, I am blessed.

Unfortunately, the wife has had gastroenteritis since Wednesday night, and has spent the last two days groaning on the sofa, fearful of straying anywhere further than a 10-second sprint from the nearest khazi – but, hey, we can’t all be lucky.

To top it all off, today is payday, and as a result I’ve been able to pick up a bottle I’ve had my eye on ever since it arrived unheralded in our warehouse a few days ago from one of my favourite distilleries – it’s the new Caol Ila Moch, a no-age-statement bottling at 43% abv.

I hadn’t heard anything about this, so it’s rather a nice surprise – especially as the word is that it’ll be around the same price as the impressive Caol Ila 12yo.  ‘Moch’ is Gaelic for ‘Dawn’, it says here, and I presume that this name has been chosen to represent the light, soft version of Caol Ila that this purports to be.  It’s younger than the 12yo as well, if Mr. Google’s to be believed – not necessarily a bad thing by any means, but it sounds like we’re getting uncomfortably close to Blasda territory here. Will my luck hold? 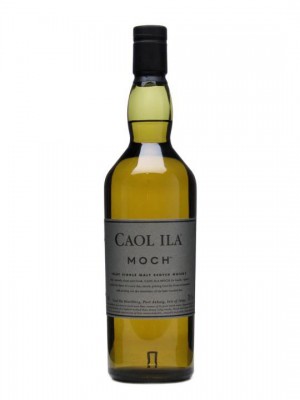 Nose: Textbook Caol Ila lemon zest, but creamier & less assertive than I remember the 12yo.  A few youngish notes that disperse quickly.  Honey and cream soda.  Some grassy notes & fresh hay. A biscuity note.  Faint smoke, but nothing scary. In short: Lemon meringue pie.  Not mind-blowingly complex, but that’s not what we’re looking for here, and it’s certainly very pleasant and inviting.  This reminds me a lot of a younger, toned-down version of Port Askaig 17yo.  For some reason.

Palate: Medium-bodied.  Slides across the tongue like an oilslick (the good kind of oilslick, I mean).   So far, so Blas-bah.

And then the peat hits.  Smoky phenols from out of nowhere.  This is much better now, with a hot-buttered-toasty soot and woodsmoke character.  These phenols take root on the palate, which seems drying, yet somehow retains the soft, silky mouthfeel and the creamy lemon sherbertiness even in the midst of the bonfire. A very clever trick.  Blas-wha?  This is in an altogether different league. A lesson in balance – not rough enough to be too challenging, but certainly retaining plenty of oomph and youthful vigour to be refreshing and very more-ish.

Finish: The smoke and soot linger, and the overall finish is longer than expected for a young whisky.  A dryness at the death demands the glass be refilled.  Which it is.

Comment: A hugely enjoyable romp through Islay’s middle ground.  Moch is the whisky that Blasda should have been. Where Blanda fell down was in sacrificing both strength and peatiness – Moch, at 43%,  is a sensible strength for a whisky of this comparative youth, and is certainly softer and more approachable than the 12yo, without ever becoming too beige and boring.

Most importantly, they’ve kept the smoky bite that a young Islay whisky needs (and the nerds demand), as well as the balancing honeyed sweetness that makes this a genuinely pleasurable drinking whisky rather than a why-don’t-we-do-this marketing exercise.  If I had a quibble, it’s that I suspect that at 46% this might have been even better, and of course it’s a racing certainty that this has been coloured and chill-filtered.  Does that mean it’s necessarily worse than if it hadn’t been?  Let’s not get into that now.

But quibbling would be a niggardly thing to do in the face of Moch’s straightforward, get-it-down-your-neck gusto.  I’ll say it – Caol Ila Moch is a joy, it’s as simple as that. In these cynical times I’m almost embarrassed to be writing such a cheerleading review, but as I said, it’s been a great week and this is the icing on the cake.

One last thing before I go – in these drinkaware days, to imply that by naming this product ‘Dawn’ Diageo were somehow suggesting Moch to be a ‘morning whisky’ would surely be far from the mark (and may be causing a few coronaries in the marketing dept as we speak).  But if the cap fits…

I’ll be keeping this bottle well away from my bedside, just in case.  Chez Forbes has a new house dram, and Diageo might just have a hit on their hands.

Just laid my hand on a bottle. I must say, that it is like you said, a nice youngish (I heard 8 years with some older blended in) whisky.
I am pleasantly surprised. But then there are a lot of young whiskies on the market who taste very good.
Not so in your face as the 12 or the CS, but a nice dram for serving to friends as a introduction to smokey, peaty Islays’

It’s a lovely and very enjoyable whisky; it’s what you said, Tim, a joy! And very recommendable!
R.

Well,
i’ve tried this one.it’s nice, milder than the CI. quite nice indeed.
i was not blown away. it’s very sippable and a real nice entry point Coal Ila.

what doesn’t diageo have a website telling more about it?