When it comes to spirits, we’re a broad church here at TWE: we like anything so long as it’s well-made, and one of our favourite spirits (after whisky, of course) is Rum.  We distribute a few excellent rums under our Speciality Brands agency, so naturally we were delighted to take a stand (literally and metaphorically) at this year’s Rumfest, which was held at the Royal Agricultural Halls in London (the same place as Whisky Live).

Rumfest is organised by the UK’s Rum Ambassador, Ian Burrell, in conjunction with the inspired lunatics at IPBartenders, and it has to be said that they do a fantastic job of it.  Last year’s inaugural event was rammed to the rafters and ended up being our favourite show of the year, and this year’s even busier follow-up was superb again, with the same winning formula of excellent rums, superb bartenders and a hugely enthusiastic Joe Public resulting in a whole weekend of good-natured chaos. 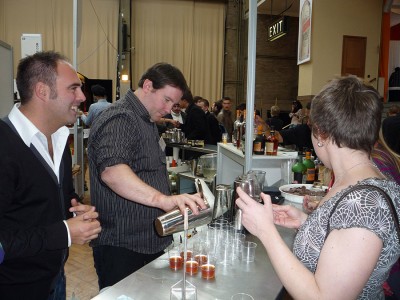 We actually had two separate stands this year: one stand for our brands (which included Diplomatico from Venezuela, Trois Rivieres from Martinique, Savanna from La Reunion and XM from Guyana); and a retail stand where we sold all the exhibitors’ products plus a load of lines from our amazing rum range.  On the brands stand we were ably assisted by our cocktail gurus Jeevan Perinpanayagam and John Leese, who both did a great job of mixing up our good friend Simon Sheena’s bespoke recipes for each brand.

As I mentioned earlier, we were pretty mobbed at both stands, although the shop probably got the worst of it.  The event started at 12pm on both Saturday and Sunday, and each time after a relatively mellow start the place was rammed by 2pm.  I was on the brands stand both days giving people the chat about XM rum – which proved immensely popular despite my warblings – and generally performing as much ‘quality control’ on Jeevan & John’s cocktails as I could fit in between the constant grinning waves of the great unwashed.

So, in all it was a great weekend, capped in perfect fashion by my beloved Liverpool FC who did what no other team had done in nearly five years and beat Chelsea at Stamford Bridge on the Sunday afternoon.  I, of course, had carefully timed my break to accidentally coincide with the game, which I watched with my coat done up to hide my LFC-embroidered ‘Diesel’ shirt (a bargain fifteen quid from Thai eBay ) in a fervently blue-hued pub round the back of Victoria Street.  What a splendid day that was.

You can see all of our photos from the event (with my usual unfunny captions) here.