An advance press release for the much-debated Bruichladdich X4 white dog – sorry, ‘Islay Spirit’ – has found its way into my inbox, so I thought I should share.  I’ve had to type it out as I can’t copy the text from an image file, but it’s probably better this way as much of the text on the file I have is SHOUTING IN BLOCK CAPITALS!  I THINK WHOEVER PUT IT TOGETHER MUST HAVE BEEN VERY EXCITED ABOUT THE WHOLE THING!!!

A traveller to the Hebrides in 1695 wrote one of the first ever whisky tasting notes.  The whisky was “…Four times distilled, and by this the natives is called Usquebaugh-Baul…[that is] usquebaugh, which at first taste affects all the members of the body; Two spoonfulls of this last liquor is a sufficient dose; and if any man exceed this, it would presently stop his breath and endanger his life.” 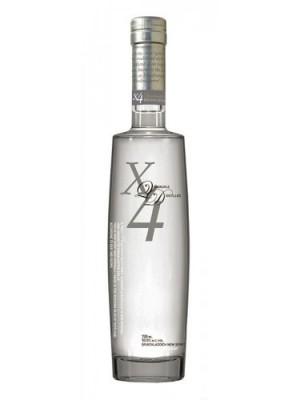 Usquebaugh-baul, pronounced ‘oosh-ker-vah-voll’ translates from the Gaelic as ‘perilous whisky’.  Distilled four times to a strength of around 90% ABV (180 proof) you can see how it got its name.  With a tasting note like that, and naturally inquisitive, head distiller Jim McEwan was intrigued enough to see what the long-forgotten, four times distillation would give.  The answer is – exceptional purity.  This clear, unaged spirit, distilled from malted barley the usual way in Bruichladdich’s tall, elegant pot stills – and then distilled twice again – has substantial flavour compared to other commercially produced white spirits.

Aqua vita, vodka, eau-de-vie, aquavit and whisky all share one thing: they mean “water of life”.  If you want to know the whisky our Hebridean forefathers drank – this is it.  Clear, strong, pure, flavoursome spirit – straight off the (illegal) still.  Today, new spirit must be three years of age before it can be called whisky.

[Editor’s Note: The remainder of this press release has been reproduced in its original format to preserve its hyperbolic comic effect]

So, there you have it:  Genius innovation or just another fancy vodka?  Comments welcome.

It is about 313 years late for being an innovation as such, obviously, but a re-discovery perhaps? Having tried the X4+1 at Bruichladdich, it is obviously not yet a whisky such as we know it. But it is on its way. And if one just adds another distillation to Auchentoshan or Hazelburn, it would very much still be a whisky, only stronger in alcohol and even more refined. It would not be akin to vodka, I’d say, after only one more distillation, provided there is a decently wide spirit cut etc.

I think it is a fair extension and the excitement and debate it has produced would suggest it is also commercially viable. Bit rich on the hype, perhaps, but then again, I’m not too keen on much marketing these days anyway…

I will be interested in trying this. Pity it wasn’t released at full blaze strength though. One point of sale lost, if I may say so.

BruichLaddich as we know and love it.
Still have some X4+1, so I will wait a few years till it matures a little bit more.
The X4 has a lot of potential, but at 2 years it has some way to go.

I often wish that more distilleries would sell the new spirit, but not at this kind of price.

The Basics of Distillation « The “Officially Unofficial” Bruichladdich Blog says:
26 November 2008 at 7:41 am

[…] has created a quadruple-distilled monster called “X4” that is nicknamed “Perilous Whisky.” When it went into the casks it was over 90% […]

It smells a little like gin or dutch ‘jenever’, but the taste is without discussion whisky, and a nice one indeed. For around €40/bottle it’s well worth the bang for the bucks. Jus wish they’d bottle it at full 90%, without water!

Bruichladdich made their whisky from malted barley. The original sources I have read (with no supporting archive I might add) say :”The trestarig and usquebaugh‑baul, are both made of oats.”
The oats would give different structures but no doubt similar results !