Crikey!  That’s been a quick fortnight – apologies for the temporary interruption in the blog, it’s all been pretty hectic here.

Last week flew by so quickly everyone at TWE was struggling to keep up with it – what with the huge demand for Port Ellen 8th Release and plenty of interest in the other newbies it was always going to be busy – but we also had to get ready for the epic messiness that is London’s Rumfest (of which more later).

Anyway, I did try and post about the Ardbeg tasting from home a week ago, but found that I couldn’t get the blog admin to work properly from my laptop at home, so apologies again.  I’m really behind with the blog now as since I last posted there’s been another Glenmorangie tasting at Vinopolis (pictures of which are here, report to follow very shortly).  I had to behave myself at the ‘Morangie tasting, though, as on Tuesday Sukhinder was up in Scotland visiting Glenglassaugh – so I had to step in and be a judge for a ‘Best of the Best’ whisky competition run by Imbibe magazine: 8 luxury blends and 13 top-end single malts.  I’ll do a little post about that as well in the next few days.

And it was the Special Releases tasting last night, so it looks like I’ll have quite a bit of blogging to do this week, otherwise I’ll be even further behind! 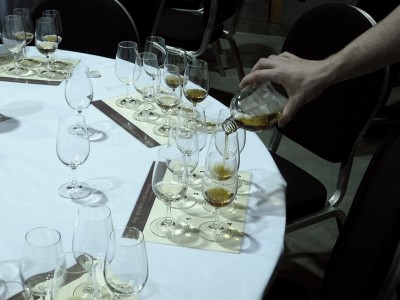 Precious nectar: pouring one of the cask samples Mickey brought

OK, enough grovelling: finally, a few words on the Ardbeg tasting on 13th October (two weeks ago, but it seems like ages already).  We were delighted and privileged to have Ardbeg distillery manager Mickey Heads hosting a tasting at TWE Vinopolis for the second time this year (the first was the Renaissance launch in June, which was another excellent tasting).

One great thing about this tasting was that for the first time we had the tables set up in the TWE shop itself rather than in one of the halls or meeting rooms dotted around the Vinopolis building.  The setting was therefore more convivial and meant that the softly-spoken Mickey was able to get his points over without having to raise his voice too much, and it has to be said that this greatly enhanced the friendly, intimate atmosphere he created effortlessly from the start. 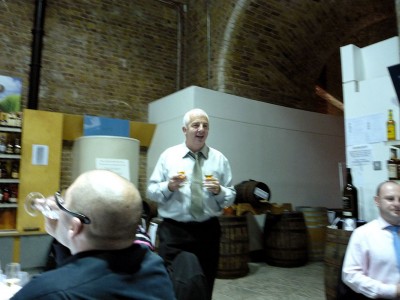 Of course, the lucky few punters who’d managed to get a ticket were all pretty excited – and with good reason, as Mickey had brought down a couple of cask samples as well as the Blasda and a bottle of the Ardbeg 1975 Cask 1375.  But it was the Blasda that everyone was really curious about.

The first thing I got on nosing the Blasda was peat, and for once I was a bit disappointed, as the object of the exercise was supposedly to have something relatively unpeated.  But there it was, alongside vanilla and some quite sweet Caramac notes.  You could definitely tell that this was mostly comprised of relatively young spirit – not necessarily a bad thing, but you know when you get a youngish spirit at this strength that you’re unlikely to be tasting anything too characterful or over-complex. And that’s before you’ve chill-filtered it.

The palate was more of the same – what there was of it.  As expected, Blasda is very much a medium-weight dram – perfectly pleasant, no obvious flaws – but unfortunately nothing to get very excited about either.  There isn’t a whiff of the power or character that one normally encounters with an Ardbeg, and in that context, the choice to include Uigeadail on the same tasting might not have been the best advised as it totally blew the Blasda out of the water.  Indeed, when I went back to the Blasda after the Uigeadail I actually thought I must have picked up my water glass by mistake as I couldn’t get anything off it at all!

Now, I’ve no doubt that some Glenmorangie apologists would say that I’m missing the point here and that Ardbeg Blasda is not aimed at the hardcore peatheads who make up 99.999999% of the people who actually buy Ardbeg in the first place (the logic of excluding those fans from a new Ardbeg release escapes me, but we won’t go there).

I expect the argument might be made that this is an Ardbeg that might draw newcomers into the Islay category without frightening them off.  My riposte to anyone foolish enough to try and make that argument to me would be to say that people coming to a new category are unlikely to want to blow forty quid on a malt that is totally atypical of the category they’re looking to explore.

And there’s the rub – the main problem with Ardbeg Blasda isn’t that it’s not peaty enough (because it’s certainly got more peat than I originally expected when I first read about it).  The problem is not that it’s been chill-filtered, nor that it costs forty quid, nor even that it’s been bottled at 40%. 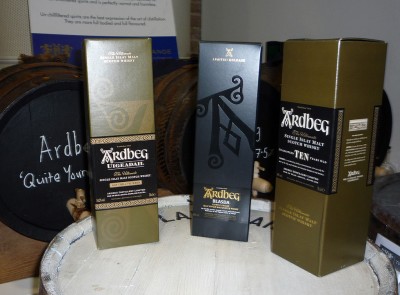 Some bottles of Ardbeg standing around having a chat

Ultimately the problem with Blasda is that it’s been chill-filtered AND it costs forty quid AND it’s been bottled at 40%.  If you were Glenmorangie, you might be able to get away with even two of those things.  But not all three at the same time.  Unfortunately the overall quality/value ratio for Blasda just doesn’t stack up against the likes of Uigedail, Renaissance or Airigh nam Beist, all of which are roughly the same price.  In that context, perhaps Ardbeg are victims of their own success here.  The standard of recent Ardbeg releases has been extraordinarily high, and therefore new bottlings are heavily-scrutinised and judged against the lofty virtues of their predecessors.

In the case of Ardbeg Blasda, it seems to be that, in the effort to produce a malt that won’t frighten off peat-averse punters while still appealing to the core fanbase, Glenmorangie have fallen between two stools and come up with something that won’t satisfy either camp.  It doesn’t help that the malt is over-priced for what it is (notwithstanding the “limited” nature of the bottling) and one can’t help feeling that for Blasda to be a success the next scheduled batch will have to compromise on either strength or price.  I reckon Blasda would be a significantly better whisky bottled at 46% without chill-filtration.  I also think that if it was priced under thirty quid, say, it would be flying off the shelves.

I’ve said it before and I’ll say it again, Ardbeg Blasda is a very nice whisky and fair play to Glenmorangie for trying something different.  I still think that a genuinely unpeated Ardbeg – a Kildalton-esque bottling that doesn’t cost hundreds of pounds – is a great idea and would be welcomed with open arms, if not tears of gratitude by the majority of Ardbeg fans.  But, unfortunately, in its present form I don’t think that this experiment will be the success that Glenmorangie would have hoped for.

Nonetheless, this particular tasting was a belter (more photos with cringeworthy captions here) and Mickey was a gentleman, mingling with the audience after the tasting and signing bottles for every person who asked.

Tim, well worded.
I have a bottle of Blasda and that will be the last.
Rather buy some Renaissances, before that’s gone.

Since I’m in the US, I’ve not tasted the Blasda yet, but from all the chatter I’ve read, I have to agree with you on the price and feature point.

From the ages old Ardbeg fan to the beginner (myself included), we have grown to expect a great tasting whisky. Comparing the Blasda to the other expressions raises our expectations beyond the imagineable, considering ABV, price and chill vs. non-chill filtration.

At the very least, the Blasda will help us consider many factors, the most mitigating of all being the value vs. quality of a beverage from one of the best distilleries in the land.

I’ll chime back in once I receive a (or several) bottles of Blasda from good ole TWE.

I visited a friend last night for a few drams and discuss our coming trip to Islay.I took a bottle of Blasda to try and we both first commented about how pale it looked. We opened the bottle and the first impression with nosing was the aroma of peat. We tried the dram and were both pleasantly surprised how good we thought it was. Yes £40 is a considerable price for 40% proof Ardbeg but we thoroughly enjoyed the taste and even though its not 10 year old Ardbeg I would consider buying another bottle.

[…] It has a nice, light peat taste, though nothing as complex and muscular as other Ardbegs.  Whisky Exchange actually has a great post outlining why the Blasda is a bad deal for newbies and scotch fanatics […]