It has been widely reported that LVMH (that’s Louis Vuitton Moet Hennessy), parent company of Glenmorangie plc, have agreed to flog off their unloved step-child Glen Moray to fellow French company La Martiniquaise.  Financial details of the deal have not been disclosed, but the deal is expected to be finalised by the end of October.

It’s not news at all that Glenmorangie have been looking to shift Glen Moray for some time, being unwilling to invest any money that could be better spent on pewter mugs and fancy leather boxes with which to garland the increasingly absurd new releases of sister distilleries Ardbeg and Glenmorangie.  With LVMH being a luxury goods company, it was clear that attention (and investment) would be focused on the blue chip distilleries.

Within LVMH, Glen Moray was about as popular as a eunuch at a swingers party, and the recent announcement of the sale of the distillery along with the Broxburn bottling facility confirmed the company’s desire to get out of the cheaper end of the whisky market.  LVMH’s efforts to reposition their brands in the luxury whisky segment sat uncomfortably with their policy of deep discounting of Glenmorangie in major UK retailers and drew criticism from some quarters of the press and media. 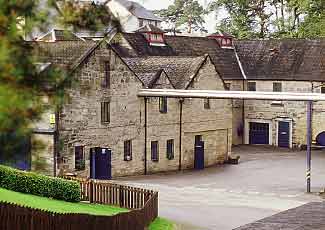 In the circumstances, therefore, it’s easy to argue that it must be a good thing for Glen Moray to be under new ownership.  But anyone who has tasted one of the many fine expressions from this criminally under-rated distillery must worry about the future plans of its new owners.  Although La Martiniquaise does own some premium rum brands like St James and Depaz through their Bardinet subsidiary, the company is primarily concerned with cheap mass market spirits.

La Martiniquaise already owns two whisky brands, the spurious ‘Glen Turner’ malt and the Label 5 blend, which is massive in overseas markets but unknown in the UK.  Glen Turner is France’s best-selling malt brand, and exists as an 8 yo ‘pure’ malt (much to the SWA’s chagrin, no doubt), as well as 12 yo and 18yo single malt expressions, which presumably contain whatever they can lay their hands on at the time. 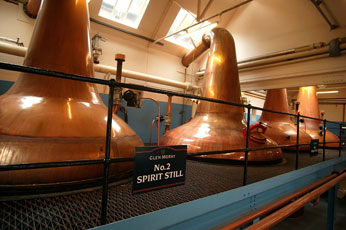 In Scotland, La Martiniquaise already owns what it calls a ‘Distillery’ – actually a warehousing complex and bottling plant near Bathgate, West Lothian.  Planning permission has only very recently been granted to the company for the construction of a distillery on the site.  In the meantime, however, it seems likely that a large chunk of Glen Moray’s production will flow into both the Glen Turner brand and Label 5, which announced itself via a full-page ad in a recent UK trade publication as the #11 Scotch Whisky brand worldwide and the 2nd fastest-growing Scotch whisky with 19% growth in sales 2005-2007.

No-one is suggesting (yet) that La Martiniquaise has anything other than honourable intentions for Glen Moray, and it would be wonderful to see the distillery’s image given the kind of facelift that has so invigorated fellow-travellers like Balblair and BenRiach, both of which have recently emerged – following judicious high profile makeovers and well-targeted brand investment – as the premier distilleries that aficionados always knew they could be.

But Glen Moray’s 2 million litres per year capacity would make a lot of Label 5.  It is to be hoped that the Glen Moray single malt brand (reported as the UK’s sixth-best seller on the back of the supermarket discounting that LVMH so abhor) is not swallowed up in their ambitious new owners’ expansion plans.

Compass Box of Delilah-ights - The Whisky Exchange Whisky Blog says:
21 September 2013 at 9:44 am

[…] cringeworthy intro blog post that was required of all blogs at the time.  The first proper post, which I’m still rather proud of as my first t’interweb essay, was the following day, […]