I only got a small olfactory glimpse of this one as I had to share a sample with two fellow attendees at the Laphroaig tasting in Albannach I told you about on Monday.  Unfortunately, over-attendance at a previous…

A few weeks ago I was lucky enough to be invited to a Laphroaig tasting held at Albannach (a posh whisky bar in Trafalgar Square in London).  I’m not often invited to this sort of event as…

To be honest, peating levels shouldn’t be a competition.  “My ppm is bigger than yours” sounds pretty ridiculous however you dress it up.  This sort of thing might be construed as macho willy-waving and not…

Okay, cutting it fine to get this out on time, but I’m determined – so here we go (this might look familiar to readers of the last post): Introducing (drum roll, please) Hanyu Distillery –…

Okay, I know it’s not like me to blog on consecutive days (or even twice in a week , let’s face it), but I made a promise yesterday and I’m going to try and be… 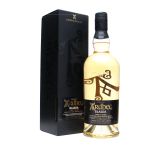