Today was all about Caol Ila.  After watching Newcastle and ‘Boro crash out from the Premiership on Sunday night we were in high spirits on the way up to the distillery – despite the crappy weather.  Joel had done a good job on breakfast, providing exemplary bacon rolls, but after a relatively heavy session over the previous night’s football we felt the need for more, and treated ourselves to some sweet potato and butternut squash soup at the distillery – lush! 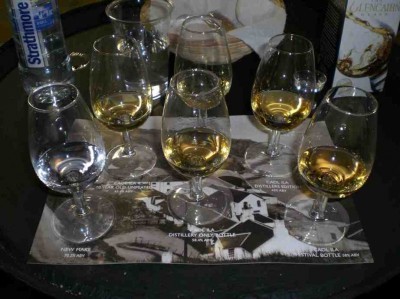 A bunch of impressive Caol Ilas

After meeting up with Paula from Edinburgh’s Whisky Experience (on behalf of Edinburgh Whisky Blog – Guys, sorry you couldn’t make it), it was time to taste some whisky, and it’s fair to say we were pretty stoked about it – we love Caol Ila here on the TWE blog and caskstrength.  The tasting was conducted by Mr. Caol Ila himself, Billy Stichell.

Caol lla New Make 70.2%
N:  Pure cereal – very oily.  Very reminiscent of a cachaca or rhum agricole.
P:  Pretty hot and assertive, as you might expect at seventy per cent abv.  Some estery notes, but the over-riding impression is of a very well-made spirit.  Clean as a whistle.
F:  Hot and short, but not too bitey.
A drop of water was called for here, and opened up a very clear uncooked sweetcorn character.

Next up was a bit of a scoop:  the 10yo Unpeated 65.4%, not scheduled to appear on shelves until October!
N:  Beautiful.  Sooooo chocolatey!  Also coffee, chocolate cake, sponge, trifle etc – you get the idea.  Very, very promising.
P:  Really delicious.  Crystal clear distillery character, with lemon, cereal, rich chocolate, sherbert and sponge-cake sweetness.
F:  Long and lovely.  This is a real treat.  Last year’s 8yo unpeated was a great whisky, but this is even better.
The next two drams were the widely-reviewed Caol Ila 12yo and Distiller’s Edition, so we’ll skip straight to the

Finally came the 2009 Festival bottling (Sherry Cask, 1996, 58%)
N:  Chocolate biscuits.  Leafy and grassy with a hint of menthol.  Brown breadcrusts.  Fudge and shortbread.
P:  Surge of peat, over some honeycomb, syrup and roasted cereal notes.  Good body and depth of flavour.  Very pleasant.
F:  A bit of heat, nicely-balanced with lingering sweetness and some chilli and black pepper notes.
We were all very impressed with this, it was very good stuff.  Great to taste Caol Ila from a sherry cask as well coupled with a well presented tasting by Billy.

We didn’t have anything in the diary for the rest of the afternoon, so we were playing it by ear.  We sauntered on up to Bunnahabhain for a brief chat with John MacLellan, who showed us his very impressive collection of Bunna festival bottlings. 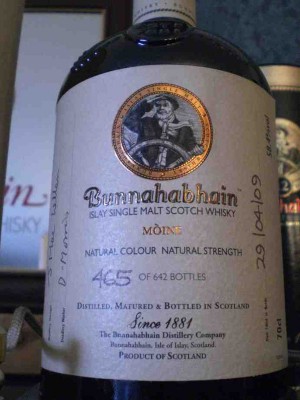 On the way home, we dropped into the legendary Duffie’s bar in Bowmore and bought a dram of this year’s Bunnahabhain ‘Moine’ festival bottling, which is a heavily–peated spirit finished in an Oloroso cask:
N:  Youthful and spirity.  Pepper, soot, Edam.  Not very expressive.
P:  Vegetal, earthy peat – but very little else.  Very thin, crisp and hot.  Completely one-dimensional.
F:  Fresh shoots, still hot.  Nothing to it.

Overall, we felt that while it was a good idea for Bunna to do a heavily-peated bottling, it really needed something else to make it interesting or worthwhile.  This was the most disappointing of the festival bottlings so far.

After returning to the ranch to write up the previous day’s events, we moseyed into Port Ellen to take part in the annual blind nosing contest held in Ramsey Hall. 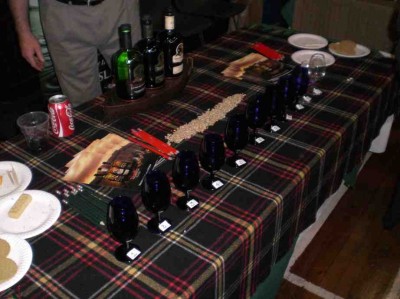 Much harder than it looks, honest

Neil and Joel were pretty confident, having both scored an impressive seven out of ten last year.   As it turned out, this confidence was totally misplaced, with Neil’s four out of eleven the best score we could manage between us.  Ashamed and embarrassed at our poor performance, we legged it before the ceilidh started. 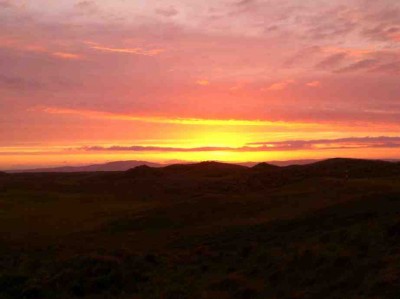 The sun was just starting to set as we drove back to the Machrie, so on impulse we grabbed a bottle of Port Askaig 17yo and strolled the couple of hundred yards to the beach. As we arrived, we were privileged to witness a quite stunning sunset.  Sparking up a Cohiba and swigging the Port Askaig, we grabbed a few photos as the clouds blazed with the embers of the dying light. 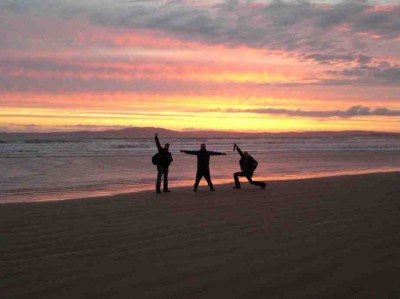 Islay does strange things to people

It was a truly beautiful moment and we were all exhilarated as we strolled back over the hotel’s golf course in the dying light.  Unfortunately a family of sandfleas had stowed away on our rugs and emerged when we got back to our lodge, causing Neil great distress.   A Chap can’t be having uninvited insects disporting themselves in his chambers.   Still, you can’t have it all your own way.

Following Feis Ile, and revisiting some earlier posts « Scotch Hobbyist’s Blog says:
27 May 2009 at 9:58 am

[…] relaunched Royal Lochnagar Select Reserve and the delicious Caol Ila 10yo mentioned above that I tried at this year’s Feis Ile.  I’ve been told that there might be a few surprises ‘under the table’ as well […]