The 6.30 wake up call resonated through our ears like plates being dropped in a restaurant; initial shock followed by reluctant applause.  But you get on with enjoying your lot and pay your bill at the end.  And a reasonable bill it seemed as we made our way up the A83 to Kennacraig for the 9.45 ferry to Port Ellen. 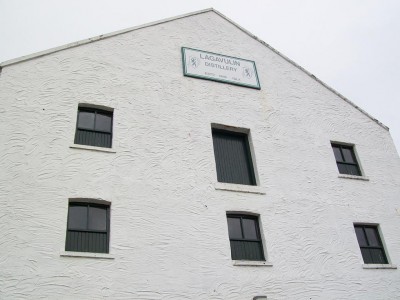 Shame about the weather

As we pulled up into our slot, awaiting ticket check and load-in to the ferry, Neil got out his confirmation email from CalMac to confirm our booking on the “SS Politician.

(Editor’s Note: What follows is a dramatisation loosely based on actual events.  Contains mild peril.  May not be suitable for readers of a nervous disposition).

Everyone Else (not quite in unison): No you haven’t. Stop dicking around.

Neil: Ha Ha, I was only jesting – here it is (waving piece of paper) 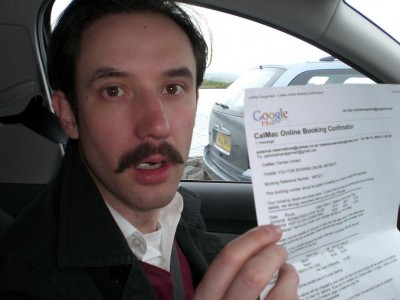 A recreation of the moment Neil nearly had a nervous breakdown

Silence is a funny old thing. And at that moment a gaping chasm of silence descends on the car. Birds cease to sing, clocks stop ticking and the facade of Neil’s psyche slowly crumbles.  Beads of sweat break out on the professional Chap’s brow.  The silence was only broken by the faint sound of chewing gum dropping onto tweed from Neil’s gaping mouth. 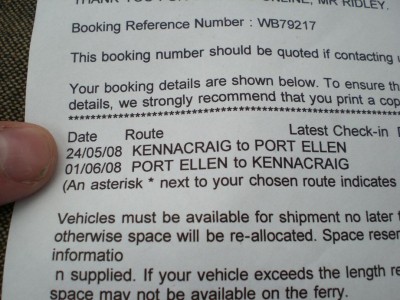 Never have a pair of brogues moved so fast as the caskstrengther moves like lightning, coat tails flapping furiously in the breeze, to the ticket office and, after some discussion, it is discovered that the heart-stopping and trip-threatening booking error was actually just a typo….

After a round of hot, sweet teas (followed by a shot of Airgh Nam Beist) order is restored and our ferry successfully departs for Islay.
Nothing quite prepares you for the arrival into Port Ellen – the sight of the distilleries and their huge black lettering looms into view and you suddenly realise you’re finally running on Islay time. 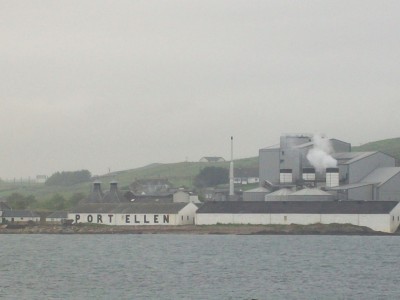 Port Ellen: Gone but not forgotten

Our first appointment was a catch up with the fine folks at Ardbeg.  Unfortunately, the hoovers were, as predicted, out in force – the ugly practice of procuring as many limited ‘1 per person’ festival bottlings by whatever means possible has become the ugly face of the Feis Ile.  More on this later.

Despite the depressing sight of slimy creatures handing wads of money to old ladies to buy bottles for them, we were determined to have a great time – and after catching up with the chipper Mickey and the irrepressible Jackie (thanks for the delicious Uigeadail!!) we headed down to Lagavulin for a Warehouse tasting we shall never forget!

Last year we attended a tasting hosted by Iain MacArthur which was sensational and this year’s was no different.  Iain led us through several vintages of Laga, starting with an 8 year old (2000, cask 426, 58%):

F:  Shortish, hot – exactly as you’d expect for a spirit of this age and strength.

P:  A lot smoother than the 8yo, still quite hot and spicy with a sweet edge.

F:  Quite hot and peppery.

Then a real treat – cask strength 16yo!

O:  A superb dram.  Iain mentioned that there might be a cask-strength bottling of 16yo in the works.  Unfortunately, he also revealed that it’ll be £350. 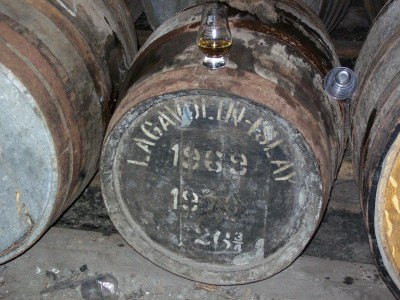 P: Tar, with a heavy mouth feel, followed by pepper, rosehips and lots of wood tannins.

F: Long and elegant, with more rose coming through.
O: An absolutely exceptional cask, just the right level of a woody notes and still fresh as a daisy.

F: The sherry influence comes through on the end, with wood spice and an element of saltiness.

O:  Not as immediate as last years bottling, but still a strong showing against some of the other distillery’s expressions.

After a light bite (crisps!) we were suited and booted for our evenings entertainment- the Bruichladdich soiree, over at the Port Mor community centre.  The food as we’d hoped for was an exceptional array of fresh local seafood and meat, washed down with the distillery’s mouthwatering 18 year old.  An excellent end of the day and hopefully the start of things to come for the week!

Following Feis Ile, and revisiting some earlier posts « Scotch Hobbyist’s Blog says:
26 May 2009 at 7:30 am