The Glenturret – more than just a distillery

No Comments on The Glenturret – more than just a distillery

We’re currently running a competition to win a fantastic trip to visit Glenturret, so I decided to head up to Scotland to see what all the fuss was about, and make sure that the prize is as excellent as it seemed.

Glenturret has two quite different sides. At its heart, it’s one of the oldest operating distilleries in Scotland, with new research suggesting that it might even be the oldest. It’s very traditional in its whisky making and until recently, not a lot had changed since the late 1950s. However, there is another side – its visitors centre. 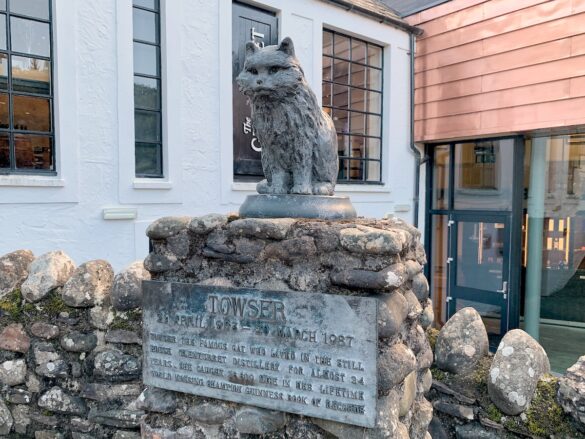 Outside the visitor is a statue of Towser, Glenturret’s famed mouser, who passed away in 1987 after almost 24 years of guarding the distillery

Originally founded as a home for Famous Grouse back in 2002, the Glenturret visitors centre – and the distillery as a whole – has recently seen many changes. In 2018, a group of investors bought the distillery and the past few years have seen it reinvent itself, but not too much.

Scotland and whisky were very different back in the 1770s. Illicit distilleries filled the glens and exciseman roamed, on the lookout for unlicensed stills. Until recently, the history books said that a distillery called Hosh was founded on the site of modern-day Glenturret in 1775, a place where there may well have been illegal stills for as much as 60 years previously. Hosh then bought the name Glenturret off a nearby, now-long-closed distillery in 1874, and the distillery we know today was officially christened.

However, documents unearthed by the new distillery owners suggest that there is evidence of an even older distillery on site before Hosh – Thurot – running at least as far back as 1763. It was then sold in 1814 before taking on the name Hosh, and then became Glenturret in 1874, as previously reckoned.

Whatever the case, they’ve been making whisky on the site, at the edge of the town of Crieff, for a very long time. 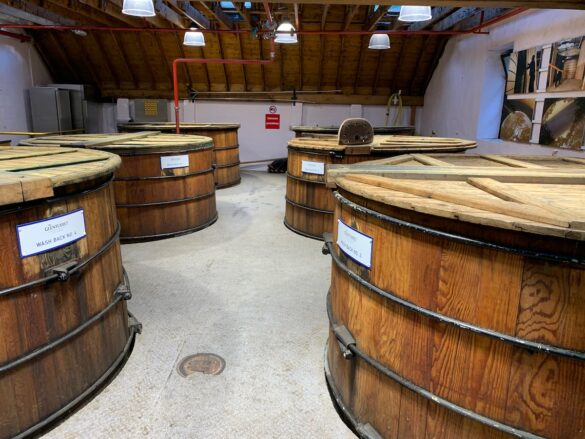 “Here are no new fads, appliances, or patents, but, like the buildings, the vessels are all of the ancient pattern.”

While the distillery was stripped of equipment in the 1920s, it was rebuilt in the 1950s to ‘the ancient pattern’, and nothing much had changed since.

However, the new owners asked the distillery team to look at what they’d like to upgrade, and with a few tweaks, a new mash tun and a bit of rescheduling, they’re more sustainable and making more spirit.

After preparation in the obligatory Porteus mill, grain is mixed with water in the distillery’s new mash tun. A bit larger, more energy efficient, more easy to clean and much easier to control, it is the biggest upgrade the distillery has seen in more than 50 years. 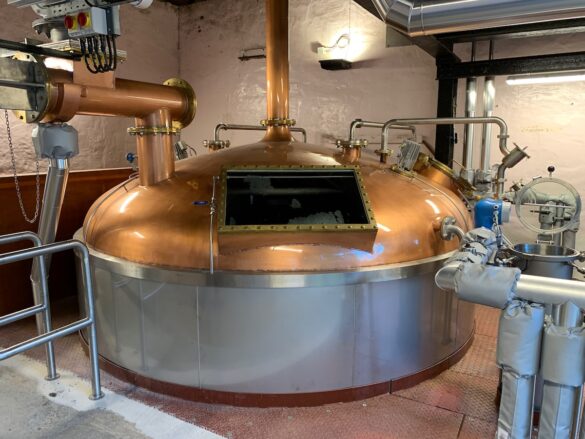 The new mash tun – pretty much the only thing to change at the distillery in years.

From there, it’s business as usual: there are wooden washbacks, where yeast is mixed with the wort and left to ferment and create alcohol, and a pair of copper stills, all in a row of buildings that would be very familiar to stillmen past.

Dinner for one (michelin Star)

While the distillery hasn’t changed, the visitors centre has. Modifications had to be done with great care as for years, thanks to the Famous Grouse Experience, it was one of the the most popular distilleries to visit in Scotland. Rather than overhaul the general visitors experience the new owners decided to add something – a restaurant: The Glenturret Lalique.

Adding a restaurant – even one with the Lalique name attached – might not seem that impressive, but when you see that it was awarded a Michelin Star after only seven months of operating, and then look at the menu, you realise this is not your run of the mill purveyor of a post-tour soup-and-a-sandwich. 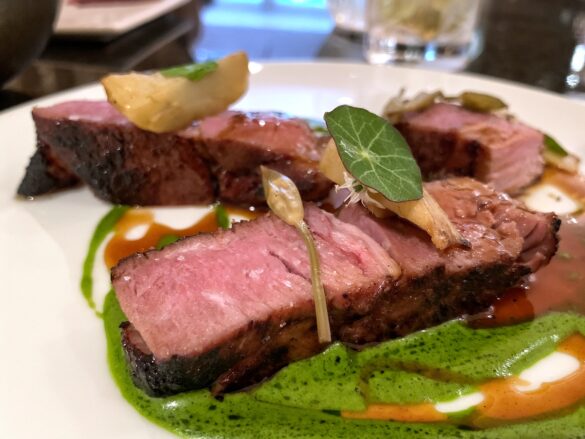 An incredible lamb dish from the lunch menu – it looked simple but was packed with little elements of flavour and texture that complemented the lamb. Vegetarian options are available.

Head Chef Mark Donald previously worked at The Balmoral in Edinburgh, but was tempted into the The Glenturret team during the pandemic and given free reign to create a new gastronomic destination in the southern Highlands. He built a team of talented chefs and has worked with the distillery to bring elements of whisky making into the menu. From using Glenturret malt in the house bread to using the temperatures of various stages in the whisky-making process while cooking, the restaurant sits at the heart of the distillery in more ways than just location.

This refurbishment and reinvention is very much thanks to the new owners: Hanjörg Wyss (businessman, philanthropist and football fan) and Silvio Denz (owner of famed glassware maker Lalique and big fan of fine dining).

Denz has been heavily involved in the development of the restaurant. Lalique created the interior and provide the glassware, and Denz brought his extensive experience of working with fine dining restaurants around the world. Further awards are already on the cards, and from my brief experience of its delights, they are well deserved.

A game of two halves

While Lalique and luxury go hand in hand, Glenturret carefully balances the rarified world of Michelin-starred dining and a working distillery with one of Scotland’s most popular visitors centres. Step away from the shiny glassware and excellent food, and you are back into the world of whisky making, with tours showing you around the small, but perfectly formed site.

Whether you feel like splashing out on one of Scotland’s best restaurants, or want to get your nose in a washback, you can find both at Glenturret.