For many, Jameson is their first experience of Irish whiskey. The classic Original is the bestselling whiskey from the country (try it with ginger ale). But this week, the brand announced it is launching The Whiskey Makers series, a new range, as well as a new look to its existing heritage whiskeys. I was lucky enough to be given a sneak preview of the newly extended family, in advance of the releases due in the summer. 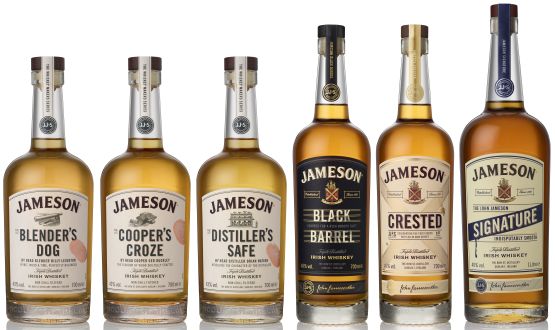 The extended family: the three on the left are the new Whisky Makers series; while the heritage whiskeys have been given a new look

Each of the three-strong series has been put together by a member of Jameson’s production team, who have chosen a style of whisky they each feel complements their area of expertise. The blends were put together by master blender Billy Leighton to ensure that the flavour profile could be recreated from batch to batch on an ongoing basis. Each release carries the name and fingerprint of the creator, and are named after a tool that is vital to their job. All are bottled at 43% and are non chill filtered. The trio are:

The whiskeys in the heritage range are not changing, but will be given an updated look and greater availability:

The heritage whiskeys have proved popular within their limited markets and will soon be available worldwide, thanks in part to a doubling of Midleton distillery’s capacity in the past two years. The distillery is known for producing many varying styles of spirit and the new Whiskey Makers series showcases this, with the selection by the head blender, cooper and distiller adding a personal touch. My favourite was the rounded Blender’s Dog, but the spirit-led Distiller’s Safe and maturation-focused Cooper’s Choice are both excellent whiskeys that display their own character. All the new releases should be launched this summer and will be available on The Whisky Exchange website.

#Whisky Jameson – new look, new whiskeys: For many, Jameson is their first experience of Irish whiskey. The c… https://t.co/pcm11RlEVo

Just as the month of abstinence is upon us ….